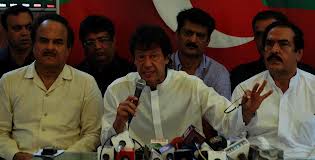 Khawaja Mohammad Asif, the PML N stalwart accused Imran Khan of corruption in SKMT accounts. He accused Khan of misusing the trust funds in gambling and real estate which caused heavy loss. Imran replied with some clarifications and retorted by claiming that Mian Nawaz Sharif during his tenure as CM Punjab and PM misappropriated billions of the national exchequer. He alleged that the royal palace of Raiwind was the result of public money. He also revealed the assets, the Sharif family has made in London UK and other countries. It seemed that the two sides have reached a point of no return. The war of words reached a point that the mighty Khan announced his intentions of approaching the most honest of the honest judges with all the evidence he has to prove corruption of The Sharif Family.

But we saw Imran Khan going back on his pledge. All his claims of going to courts went in the air. Since August 8,2012 more than 2 weeks have passed but thre is no movement in this regard as far as Imran is concerned.

What went wrong? Which force has restrained him doing so? Let us look at the events just before and after the August 8 announcement.
Imran had on July 12, 2012 declared his program of storming the N Waziristan against what he called American intervention through Drone attacks. He said that he would take a long march to N Waziristan in September. The episode of allegations and counter allegations between N league and Imran started in the last week of July till Imran finally pledged to resolve the matter of corruption in the court. All of a sudden TTP (Tehrik e Taliban Pakistan) gave a killing threat to Imran Khan within 12 hours of his press conference in which Imran pledged to go to the court. It is strange that Imran’s intentions of marching on to Waziristan did not wake TTP for any reaction, but all of a sudden TTP wakes up and threatened him of KILLING with lame excuse of “ Hum ek pro-western politician ki hamdardi ke muhtaj naheen hain. Imran ne long march kia to use qatal kar dia jaiga”. This message was sent by Mullah Ehsaan ullah to the media on August 8, 2012.

I request my countrymen to see this development with due concern, because Imran Khan have forgotten his pledge to draw Mian Nawaz sharif to the courts since then but he has reiterated his resolve to march on Waziristan a number of times. His instance on Sharif family’s corruption has changed. But why? What is the relation between TTP threat and Sharif family? Imran perceived the real threat and became silent vis a vis NS corruption. Had the threat really meant to restraining him to pursue Sharif’s corruption? If yes, it may be a very horrible phenomenon to silence a voice against corruption of Sharif Family. Furthermore how many people have already been silenced by TTP over this issue without even threatening them publically? I remember a case who had taken up the issue of Nawaz Sharif getting money from TTP God Father Osama. He was brutally killed by TTP (Punjab Chapter) after being kidnapped by an unknown organization “ASIAN TIGERS”. Don’t forget that Nawaz Sharif has many times pledged to make Pakista An ASIAN TIGER.