Home  »  Newspaper Articles   »   Are the Saudi Wahhabi clerics waiting for an opportunity to destroy the Prophet’s mosque in Medina?- by Ali Taj

This is a mini documentary which shows a systematic destruction of the holy and historic sites of the Muslim world in Mecca and Medina.

Sami Angawi, the founder and former director of Mecca’s Hajj Research Center and opponent of the destruction of Mecca’s historic sites, estimates that over 300 antiquity sites in Mecca and Medina have already been destroyed, such as the house of the first caliph, Abu Bakr, which was levelled to make room for the Mecca Hilton Hotel. (According to Ivor McBurney, a spokesman for Hilton, “We saw the tremendous opportunities to tap into Saudi Arabia’s religious tourism segment.) “It’s not just our heritage, it’s the evidence of the story of the Prophet,” What can we say now? ‘This parking lot was the first school of Islam’? ‘There used to be a mountain here where Mohammed made a speech’? … What’s the difference between history and legend?” “Evidence.” Saudi authorities have authorized the destruction of hundreds of antiquities, such as an important eighteenth-century Ottoman fortress in Mecca that was razed to make way for the Abraj Al Bait Towers — a move the Turkish foreign minister condemned as “cultural genocide.” An ancient house belonging to the Prophet Mohammed was recently razed to make room for a public toilet facility. An ancient mosque belonging to Abu Bakr has now been replaced by an ATM machine. And the sites of Mohammed’s historic battles at Uhud and Badr have been paved to put up a parking lot. The remaining historical religious sites in Mecca can be counted on one hand and will likely not make it much past the next hajj, “It is incredible how little respect is paid to the house of God.”

The government accelerated the tempo of destruction of the Islamic ancient sites during the course of the Iraqi occupation of Kuwait. the Saudi government capitalized on the concentration of the world attention on the Iraqi-Kuwait crises, thus decided to wipe out shrines and houses of the prophet, and his Companions. A pamphlet published by the Ministry of Islamic Affairs, endorsed by Abdulaziz Al Sheikh, the Grand Mufti of Saudi Arabia, and distributed at the Prophet’s Mosque, where The Prophet Mohammed, Abu Bakr, and Omar bin Al Khattab are buried, reads, “The green dome shall be demolished and the three graves flattened in the Prophet’s Mosque,” This shocking sentiment was echoed in a speech by the late Muhammad ibn Al Uthaymeen, one of Saudi Arabia’s most prominent Wahhabi clerics, who delivered sermons in Mecca’s Grand Mosque for over 35 years: “We hope one day we’ll be able to destroy the green dome of the Prophet Mohammed,” he said, in a recording. Writing in response to the article, Prince Turki al-Faisal said that Saudi Arabia was spending more than $19bn (£11bn) preserving and maintaining these two holy sites. “[We are aware] how important the preservation of this heritage is, not just to us but to the millions of Muslims from around the world who visit the two holy mosques every year. It is hardly something we are going to allow to be destroyed.” Today there are no fewer than 20 structures remaining in Mecca that date back to the time of the Prophet 1400 years ago. The litany of this lost history includes the house of Khadijah, the wife of the Prophet, demolished to make way for public lavatories; the house of Abu Bakr, the Prophet’s companion, now the site of the local Hilton hotel; the house of Ali-Oraid, the grandson of the Prophet, and the Mosque of abu-Qubais, now the location of the King’s palace in Mecca.

The documentary talks about a pamphlet circulated to pilgrims at the Masjid e Nabwi which promotes the idea of demolishing the mosque of Prophet Mohammed pubh. This ridiculous and sacrilegious idea has its roots in Wahhabi ideology. Their scholars (read hate mongers or vandals) cherry pick weak hadeeth to justify their passion to destroy all historical proof of Islam, so that in time Islam can also become a mythological religion like some other religions that do not have the archaeological, documentary and historic strength of Islam.

The  Saudi/Wahhabis took over Hijaz after destroying the last Islamic Caliphate in 1925 they were highly resented by the rest of Islamic world especially the Deobandis and Brelvis. In fact the Saudi Wahhabis made a pact with the Muslims of India (who supported the Khilafat movement for restoration of the last Caliphate of Islam). The pact clearly spelled out that the holy places of Mecca and Medina belonged to all Muslims. The Saudis will hand them over to the control of the holy places to united body of all Muslims.

They also “expressed grave concerns over the false propaganda run by Urdu Media to show the Imam as most revered personality of Islamic world”. They even demanded the Mecca Imam for a clarification on the treaty made between Indian Muslim leaders and the Saudi Kingdon in 1925 in which king Abdul Azeez (Ibn Saud) had promised to hand over Mecca, Medina and other cities of Hijaj under the custodianship of a united body of world Muslim leaders after the establishment of peace in the region but the treaty has so far not been followed. They also asked the Imam to convey this message of Indian Muslims to Saudi king Abdullah.

However, slowly they have poisoned pilgrims bombarding with gifts of propaganda pamphlets that are gradually but surely demonizing the Islamic world. This is what we call extremism (which is a nursery for terrorism), another word for it maybe Saudization. No pilgrim is allowed to bring any literature into Saudi Arabia yet they are given hateful Pamphlets about destruction of the very sites they are visiting. These traitors to the last Islamic Caliphate, supporters of the British and co founders of Israeli State are not short on strategy and hypocrisy.

The reason why it has not been demolished

The scholars have explained the shar’i rulings concerning the building of this dome and its obvious effects on the followers of bid’ah’ who have developed an attachment to this structure and its colour, and they praise and venerate it a great deal in their poetry and writings. Now it is up to the authorities to implement these fatwas, and this is nothing to do with the scholars.

The reason why it is not demolished is so as to ward off fitnah and for fear that it may lead to chaos among the ordinary people and the ignorant. Unfortunately the ordinary people have only reached this level of veneration towards this dome because of the leadership of misguided scholars and imams of innovation. They are the ones who incite the ordinary people against the land of the Two Holy Sanctuaries and its ‘aqeedah and its manhaj. They are very upset about many actions that are in accordance with sharee’ah in our view and contrary to innovation in their view.

The above excerpt shows their strategy is the same as it was in 1925. The will befriend the Deobandis and Brelvis and gradually win them over to their side (they have been successful in Pakistan with the help of Dictator General Zia ul Haq). Just like the reneged on their pact with the Muslims of India in 1925 they will mislead and look for an opportunity to destroy Masjid e Nabwi – WAKE UP AND BRING LIBERATE AND SAVE THE HOLY CITIES FORM IMMINENT DESTRUCTION. 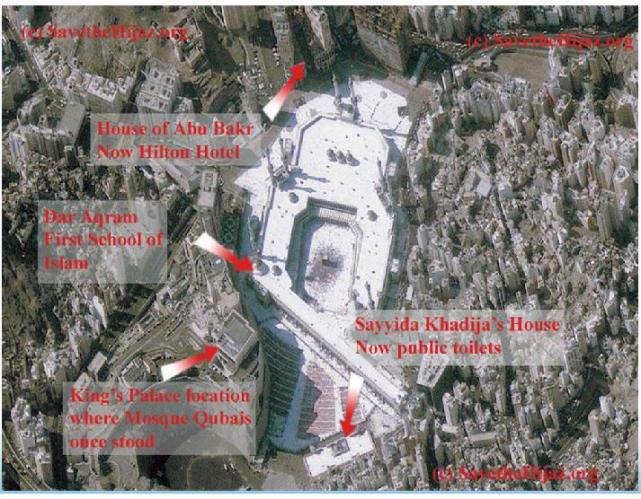