Home  »  Original Articles   »   Taliban’s attack on PAF base Kamra: Pity the nation whose security is in the hands of Dangerous Duffers 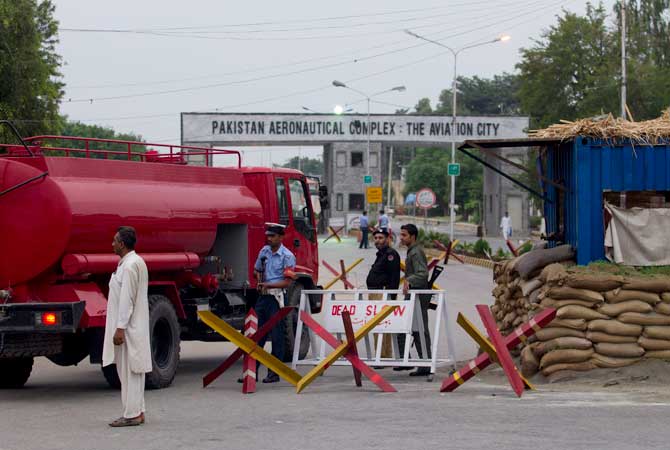 A pre-emptive strike by the “Haqqani Taliban network"?

Suspected Islamist militants belonging Jihadi Deobandi groups, i.e., Taiban, ASWJ-LeJ, affiliated with the Al Qaeda, attacked a major Pakistan Air Force (PAF) base, Kamra, where some of the country’s nuclear weapons are thought to be stored in the early hours of Thursday (16 August 2012), setting off an exchange of fire that lasted several hours. According to latest reports, at least one soldier while eight Jihadi Deobandis have been killed. The base, in the Attock district of Punjab, is believed to be one of the locations where part of Pakistan’s nuclear stockpile, estimated to include at least 100 warheads, is stored. (Source)

PAF Base Minhas (Kamra) is home to Pakistan’s most prized aviation asset the Saab 2000 (est. costs $300 Million each), PAF has 4 Saab 2000. It builds Mirage fighter planes and, with the Chinese support, the JF-17 fighter jets. At least some of Pakistan’s strategic (nuclear) assets are also rumoured to be placed at Kamra. The attack will reignite global concerns about security of Pakistan’s nuclear weapons.

The Kamra attack is neither out of ordinary nor unexpected.  Here is a worth reading analysis by the Long War Journal:

The Movement of the Taliban in Pakistan has conducted numerous attacks against government installations in Punjab in the past. In July, the group executed two attacks in Punjab against security personnel. On July 12, the Taliban claimed credit for an attack that day on a police facility in Lahore that killed eight policemen, as well as a July 9 attack in Gurjat that killed six soldiers and a policeman.

The attack at Kamra Air Force Base is similar to another assault, which took place on May 22, 2011 at Pakistani Naval Station Mehran in Karachi. During that assault, the Taliban destroyed two US-made 3C Orion maritime surveillance planes and damaged another, and killed 10 Pakistani troops.

Another brazen attack took place at Army General Headquarters in Rawalpindi on Oct. 10, 2009. A suicide assault team stormed the facility and took control of several buildings before being killed. Six Pakistani soldiers, including a brigadier general and a lieutenant colonel, and four terrorists were killed during the siege.

The Taliban have conducted an attack once before at Kamra Air Force Base, in December 2007. A suicide bomber wounded seven Pakistani personnel in that attack. Additionally, suicide bombers have conducted attacks at a nearby weapons facility thought to be associated with Pakistan’s nuclear program.

In August 2008, two Taliban suicide bombers killed 70 Pakistani employees when the bombers detonated outside the gates of the Wah Cantt. And in October 2009, a suicide bomber struck at the nearby Kamra Air Weapon Complex, killing four civilians. The Kamra facility is one of three military industrial production facilities in the Wah Cantt and is believed to be connected with Pakistan’s nuclear weapons program. Components for nuclear weapons are thought to be stored at the facility disassembled, and can be assembled within hours of needed use.

Suicide bombers have also conducted an attack at the Sargodha Air Force Base, in November 2007. In that attack, a suicide bomber drove his motorcycle into a bus carrying military and intelligence officers at the air base, killing eight Pakistanis. The Sargodha Air Force Base is the headquarters of the Central Air Command and houses nuclear-capable F-16 strike aircraft and ballistic missiles. Nuclear weapons are also thought to be stored at the base.

The Kamra attack is once again a reminder that Pakistan army cannot continue to rely on non-state actors as Jihadi assets. The Islamist mercenaries brainwashed with hate ideology (Xenophobia, sectarianism, radical Deobandi-Salafi ideology) are subservient to their own Jihadi-sectarian agenda. They are nobody’s friends or assets.

However, as always Pakistani media, as instructed by Pakistan army agencies, is in the state of denial. Instead of reflecting and reviewing Pakistani State’s policy of nurturing and protecting non-State actors (Jihadi warriors of Taliban, JuD/LeT, ASWJ/LeJ etc), the usual suspects are busy in obfuscating, shifting blame to certain foreign based terrorists and their masters (i.e., in Afghanistan, India, USA etc).

Here are some quick reflections and examples:

Pakistani media is hiding that in all likelihood Adnan Rashid, ex PAF, was a planner behind the Kamra attack.

Pakistan army and media will never state that most likely attackers on Kamra came from this place, the Bannun Prison which was broken a few weeks ago, not without the help of Pakistani security agencies: https://lubpak.com/archives/76081

Pakistan nation must learn from brave people of Parachinar. Identifying enemy is crucial so that it could be defeated.

As noted by a Pakistani columnist, from Data Darbar to GHQ, from Mehran base to Marriot, from imambargahs to janaza processions…are targets, and still its not our war?

One security person Sepoy Asif was the first to challenge ASWJ-Taliban terrorists embraced martyrdom.. On Lailatul Qadr, our thoughts are with brave airmen who saved PAF base Kamra from Taliban/ASWJ terrorists. Terrorists can never be assets!

Punjabi Taliban (aka LeJ)’s best friend Hamid Mir has already declared that Kamra attack was carried out by Afghanistan based militants.

Look at this man, a mutual asset of Geo TV and Pakistani agencies, he is still in denial:

Hamid Mir ‏@HamidMirGEO
Why Pakistani intelligence agencies were sleeping when Afghanistan based militants planned and stormed Kamra air base???

Other usual suspects are repeating the same narrative despite being challenged by some sane voices.

Ahmed Quraishi ‏@AQpk
When #Pakistani borders & politics are penetrated by foreign implants, it’s not difficult to break into bases | #Kamra

Faizan Malik ‏@Jiyaala
Terrorists attacked #KAMRA Airbase have been identified and are foreign nationals. Photos of terrorists will be released soon #GEO reported

Ahmed S K Durrani ‏@askdurrani
A foreign conspiracy or not, security at our military bases must be profound to avoid future attacks. About time we learnt a lesson! #Kamra

Roohullah Gulzari ‏@roohgulzari
@HamidMirGEO Are you sure they were #Afghan based terrorists? Still you r giving room the #Pakistani taliban( #TTP ).

Hamid Mir ‏@HamidMirGEO
@roohgulzari Pakistani Taliban are getting arms and money from Afghanistan.U r trying to create confusion but we know our enemies well.

Syed Naeem Abbas ‏@SNaeemAbbas
@HamidMirGEO how do u know dat these r Afghan based militants?

Courte12 ‏@Courte13
Taliban based in Waziristan have claimed many such attacks in the past. Why did not you blame them if speculation was your only evidence.

Imran Jattala ‏@ijattala
Do you mean Mullah Umar? Pakistan’s @SenRehmanMalik says ‘Terrorists are working on the agenda of their foreign masters’ #Kamra

Only two days ago, General Kayani uttered the right rhetoric: “The fight against extremism and terrorism is our own war and we are right in fighting it. Let there be no doubt about it, otherwise we’ll be divided and taken towards civil war. Our minds should be clear on this….We realise that the most difficult task for any army is to fight against its own people. But this happens as a last resort. Our real objective is to restore peace in these areas so that people can lead normal lives. No state can afford a parallel system or a militant force.”

The question is: Will General Kayani go ahead and attempt at translating his rhetoric into reality?

Why are Malik Ishaq, Hafiz Saeed, Mullah Abdul Aziz allowed to freely spew venom and recruit fresh Jihadi-sectarian militants in the land of the pure?

Why is the Haqqani Network in FATA and Taliban-LeJ Shura network in Quetta still untouched by Pakistan army?

Dear General Kayani: GHQ, Mehran, Kamra & so on. Still you are unwilling to abandon support for Jihadi assets?

Pity the nation whose national security is in the hands of Dangerous Duffers.