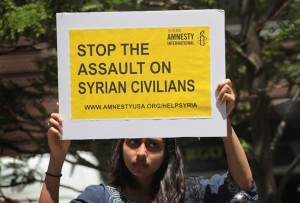 Amnesty International has released satellite pictures of “craters” in Syria, citing : “an increased use of heavy weaponry, including near residential areas”.

Further: “Turning Syria’s most populous city into a battlefield will have devastating consequences for civilians. The atrocities in Syria are mounting already,” warned Christoph Koettl, emergency response manager for Amnesty International USA, without acknowedging that the killings of civilians are committed by the US-NATO Free Syrian Army (FSA) rather than the government.

“The Syrian military and the opposition fighters must both adhere to international humanitarian law, which strictly forbids the use of tactics and weapons that fail to distinguish between military and civilian targets”, he added.
Amnesty’s record on impartiality suffered a fatal blow when they stated in 1991 that Iraqi soldiers had torn babies from their incubators in Kuwait and left them to die on the floor of the hospital’s neo-natal unit. Arguably this sealed the 1991 onslaught on Iraq. The story that the Kuwaiti government rewarded Amnesty with $500,000 for endorsing this pack of lies has not gone away – and as far as I am aware, to date, has not been denied.

Amnesty’s record suffered a further blow when it organised a demonstration last year, outside the London Syrian Embassy, with CAABU (Council for Arab British Understanding) calling for the overthrow of the sovereign Syrian government. A plan which was outlined by the US Embassy in Damascus in December 2005. This action arguably falls under the definition of incitement to terrorism, set out by the UN Security Council on 4th May 2012. (SC/10636.)
The Syrian government is doing what any nation would do to defend its country when attacked by terrorists, many from outside and many also with British accents, according to recently escaped, kidnapped British and Dutch journalists.
However, back to your 600 craters. The insurgents also seemingly have rocket propelled grenades and have also boasted of capturing tanks with heavy weaponry. However many craters or not, they will certainly be responsible for many and will not have clean hands.

Further, I do not seem to remember Amnesty blasting the British and Americans soldiers for killing, raping, murdering whole families of Iraqis and Afghans, also illegally invaded, who simply wanted their countries back, or were totally innocent victims.

No doubt the all is now directed by your new US Head, former top aide to Hilary Clinton, who seems to hate most of the world’s non Western population, especially those of the Middle East, or of predominantly Muslim heritage.
Amnesty has moved a long way from its fine founding aims.