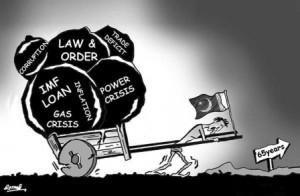 In Pakistan if there is a history of Bourgeoisie of 65 years then there is also one more history of the oppressed masses and working class of their fight against the brutal capitalist system and its allies with the imperialist forces.After a day one more freedom festival will be observed here on the account of the oppressed and unfortunate masses of Pakistan.

All the state sponsored institutions will tell us the fake stories of the sacrifices for this country but they neither have the courage nor they want to tell this generations a naked truth about the bloody partition which took thousands lives of innocent people.

The dream which our ruling class always tells is just a bloody lie as this country was just build to safeguard the assets and luxuries of the minor Bourgeoisie class of the state compromising of the Army,Media,Judiciary,Wealthy Politicians and so on.

Today our masses are in the poorest conditions and they are in vain to even enjoy a single minute in this state,their miseries are unacceptable and their lives are become so horrible that are not to mention.

Unfortunately the political party PPP which is an ideological party of the poor masses and working class is also treating them so badly and this is an historical unfortunate that the party which came into being on the struggle and the principles of the equality on the basis of a socialist economy has forgotten its foundation principles and is not remain different than any right wing party.

But I know that this will not remain longer and the time is very near when the poor,oppressed working class will take all the things in their hands and when they will vote on the roads with their feet then a new dawn will rise and that will be the beginning of a new era and the time will come when the foundation principles will be laid down by the working class and we will see a new Pakistan emerging on the socialist economy and whose prime task will be to end all discriminations and to prevail equality.