Oscar Wilde once described patriotism as “the virtue of the vicious”. In the many articles published in this newspaper, I have tried to steer clear of the vicious kind of narrow chest-thumping patriotism, preferring Benjamin Franklin’s version instead — a patriot ought to remain true to his country, right or wrong, provided that when his country is wrong, he considers it his patriotic duty to correct it. However, there does come a time when even the most right thinking of patriots are driven into a corner. 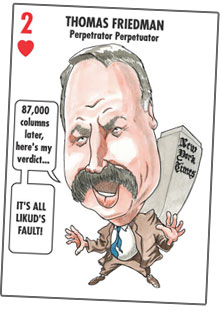 In an article that should have had nothing to do with Pakistan, Thomas Friedman of the New York Times subtly dropped the nugget that Pakistanis espouse the most puritanical form of Sunni Islam along with Saudi Arabia (‘Broadway and the Mosque’, NYT, August 4, 2010). As a Pakistani of an entirely non-Sunni background, I am taken aback by this utterly ill informed claim. The reason for my angst: Pakistan is not only the second largest Shia country in the world after Iran, but also houses the largest populations of Ahmedis and Ismailis in the world.

Furthermore, most of Pakistan’s popular civilian leaders such as Jinnah and the Bhuttos have been Shias by faith. It is true that General Zia’s US-backed military regime did much damage to Pakistan’s common law-based legal structure by introducing the Wahabi interpretation of Islamic law. It all but destroyed Pakistan’s secular education system through a bigoted narrow curriculum in the 1980s while the Pentagon looked away (primarily because puritanical Islam was of great value in the great jihad against the Soviet Union), but that still does not prove Mr Friedman’s claim. Had he tried to educate himself on the issue, he would have learnt that even Pakistan’s Sunni Muslims are mostly from the softer Barelvi creed, and that the Deobandi high church is an aberration thanks to the US’s favourite military dictator.

In an earlier article, the same columnist wrote about how Pakistan was still obsessed with being ‘non-India’ even after 63 years of its founding. I would have bought that argument had I not discovered that US Solicitor-General Elena Kagan’s nomination to the US Supreme Court is being challenged by her detractors on the grounds that she relies too much on ‘foreign law’. How ironic it is that while Pakistan, which according to Mr Friedman is obsessed with being non-India, makes it almost mandatory for a Pakistani judge to know Indian case law (which, as I showed in my article ‘Legal minds of Pakistan’, Daily Times, July 12, 2010, is beyond persuasive case law; it is near law), an almost xenophobic contempt for all foreign law, including of course English law, echoes without exception at judicial confirmation hearings in the US.

This extends far beyond the law. The Americans stopped playing cricket because it was too English. They slaughtered the elegant spellings and pristine grammatical rules of the English language primarily because they wanted to prove that they were not English. Indeed they drive on the wrong side of the road only because, well, they are not English. Of the founding fathers, Thomas Jefferson is exalted far above Alexander Hamilton (whose contributions were no less than Jefferson) only because Hamilton was considered a bit of an Anglophile.

Just to drive the point home, my alma mater in the US, Rutgers College, was originally chartered as Queen’s College in 1766. It was renamed after an obscure revolutionary war hero (Colonel Henry Rutgers) sometime after the War of Independence. In comparison, my late father was an alumnus of Lahore’s Diyal Singh College, named after a Sikh philanthropist who is claimed by India. The name stands to this date despite Pakistan’s alleged 63-year obsession with being ‘non-India’.

Most of us remember how a few years ago the US sought to rename french fries as ‘freedom fries’. I suppose it is precisely such unfettered freedom that has fried Mr Friedman’s brain cells. But then, there is of course a background to Mr Friedman’s penchant for Pakistan-bashing. A few years ago, Mr Friedman allegedly (my source though is impeccable) told a group of Pakistani-Americans that if they could pay a higher price than Indian-Americans, he would stop abusing Pakistan altogether. Pakistani Americans could not match up and, therefore, Mr Friedman continues to bash Pakistan.

There should, however, be an end to such sophistry. Pakistan is going through an extremely trying time in its history, much of it the doing of its own ruling elite. However, both Robert Gates and Hillary Clinton have admitted on record that much of Pakistan’s current dilemma is directly attributable to the way the Americans mishandled the post-Afghan war period. For some smug New York Times columnist to then get up and bash the country for ills that the US is partly responsible for only adds fuel to the fire.

Almost everyone in ‘non-America’ has his or her own idea of the ‘ignorant/arrogant American’. Mine though is not of your typical American from some midwestern suburbia trying to make it to his child’s little league game. It is Thomas Friedman and the rest of the arrogant New York pseudo-intellectual self-styled elite of American public opinion, which is incapable of producing anything but vomit in their globally syndicated columns. These fools — and I use the term most respectfully — do more to create anti-American feeling globally than the entire motley crew of Fox News’ crazed right-wing jokers, including Bill O’ Reilly.

My advice to Mr Friedman and other geniuses of his ilk — concentrate on writing about culture and society in the village. Stop bothering yourselves with global politics. This is just not your cup of coffee.