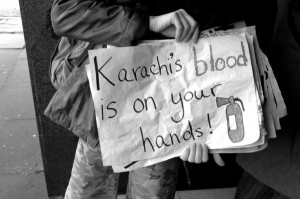 MQM, its rise, its style of politics, transformation from a so-called nationalist party into a pressure group, its claim to be sole representative of Urban Sindh, its attempts to change its outlook and increase influence outside urban Sindh and become a nationalist party and its own strategic, organizational and operational faults which have become the biggest hurdle in its own aims; this all demands a serious study which has not been carried out partly because of its  influence on media and scholars in Karachi and partly because of an ignorant attitude or contempt  and hatred towards the party from rest of intelligentsia in Pakistan. Sad part is that Muhajirs or Urdu Speaking as they are called became a target as well under shadow of MQM.

First victim of MQM were none else but the Muhajirs, those who supported progressive democratic movements included NAP and PPP or those who were supporting Jamat-e-Islami.  They were educated and progressive middle class as a whole with all complexities and misconceptions we have inherited and were a danger for establishment (feudal interest) of this country. MQM stopped that progress in Urban Sindh and the ethnic divide fully supported the establishment, initially the Zia regime. The nationalists in Sindh were totally disillusioned and their energies wasted in communal violence, and progressives in Muhajirs were sidelined. This question that why they do not consider Sindh their home and still call themselves Muhajirs is controversial and deep rooted in our history and all involved are responsible for it since very inception of Pakistan, but any progress towards the goal of alignment was completely blocked by MQM and its feuds with different ethnic groups and resulting contempt and hatred against it in nationalist politics.

Muhajirs got a leadership which was from uneducated, biased, almost pathetic elements, I am not sure if people remember Rasheed Bhayya, who later became Rasheed Ahmed Khan Rajput and Mayor of Hyderabad, that is the sort of leadership Muhajirs got from MQM, that ‘bhai’ culture did harm to people and has deeply impacted psychology of people of Urban Sinsd. I have very deep respect for my labors and workers, they are blood supply of our economic life, but progressive, ideologists and genuine amongst them were not what was recruited by MQM, and hence MQM harmed the interests of the working classes of Urban Sindh as well. That leadership was forced on them, with the idea of ‘mazloomiat’, most of them had to rely on government jobs and that was the trap set for them, ‘Quota System khatam karo’ was the biggest slogan of MQM in eighties. Progressives and sensible amongst Muhajirs have never supported policies and politics of MQM, but they were trapped and had no support, in the aftermath of ethnic violence and growing divide and unrest between communities, as well as ignorance and failures to provide an alternate by other mainstream political parties;  there was no way out.

MQM is still following same policy, violence and brutal force is their only method and survival, because violence provokes violence and kills rationality, everybody is a victim in this situation and hence we can only hear complaints and outcries, that is very natural but we need bit of rationality and understanding here. Elements in MQM wants complete control because that can be their assurance of position they have in national politics, moreover the gangs with patronage and money they make by crimes, and other means of corruption, that is not possible without a firm grip on the city and people.

Karachi is the only metropolitan in Pakistan, with population exceeding 15 million, its people are from all over Pakistan and it is rightly called mini-Pakistan, it is a big market and as evident now it is not only a competition in under world but the competition to hold markets and business such as property, transport and trade which has turned an ethnic look and almost all business interests in city now support one or another political party. And then there are markets where workforce is needed and which provide for lower and middle classes in city specially retail, industry and services sector, here competition can easily take an ethnic look and that competition is growing. Small business is deteriorating and almost no growth in our small business sector and small industry is almost vanishing from Karachi, rising inflation has made life hell for people, and the gap between classes is widening. The class in which MQM has strong hold is economically deprived, they have no jobs (and now no education) and everyday less opportunities to earn through work on daily wages etc. Pushtoons in this scenario are their biggest rivals in fight for resources, and hence ethnic divide and hatred. People living in Layari and surroundings were not competing with MQM support base for long, but it is no more the case.  Every passing day with less opportunities and more competition will bring more and more conflicts, and that all will go to support criminal elements in MQM and other criminal Mafias under political patronage. Moreover the environment created by criminal groups has kind of a network effect, to protect themselves other ethnicities and groups are forced to seek support from similar rival elements and different groups are grown like mushrooms, a whole cause and effect cycle which has no parallel at least in Pakistan.

It is however amazing to see people in MQM cadres jumping the economic and social ladder; if they started as a middle class, they are no more in same; they have themselves progressed just like many other of their counterparts elsewhere in this unfortunate country. People who support MQM, must raise this question, a wrong cannot be an excuse for another wrong, leaders are answerable to people, the notion that MQM provided opportunities and its leadership is from middle class is largely diminished by unaccounted growth of leadership cadres in MQM.

In order to transform a monster like MQM (as it is today, on verge of destruction of its own support base and people), we need more than an operation clean up, but it is really a closed circle situation. A political alliance, will to work in people, mass mobilization, strong contacts, creation of good will that all is required, we need many economic reforms as well, Karachi is not isolated from rest of Pakistan, and it is part of crisis Pakistan is in. We do not see government of Pakistan, political parties and other institutions with a reasonable policy or even an understanding of situation; everyone is trying to avoid realities and get some time. MQM can be forced to talk and change its preferences and strategy, but that needs seriousness. Muhajirs in Karachi and elsewhere have nowhere to go, it is their land, they will live and die here, and they have to make clear choices and should come forward with liberal progressive forces of Pakistan. Separation will not do any good for them; it is not possible and not desirable. Denial can not change realities but add to the difficulties. Other political forces and stake holders have to realize that too and create forward looking policies.