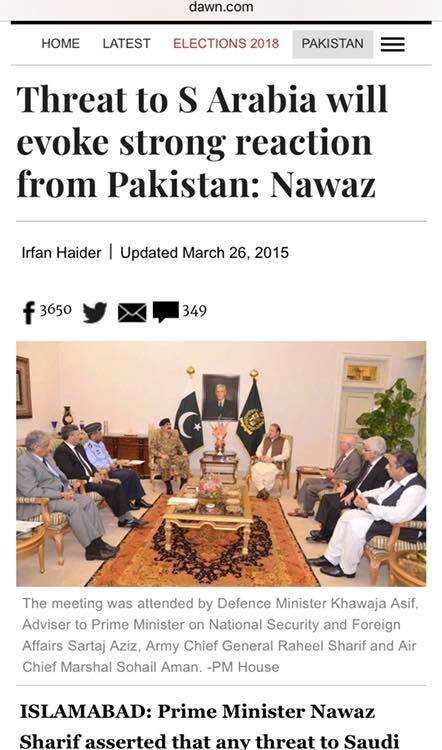 The elected politicians of the United States are just more sophisticated about corruption. Multiple US Senators are on the Saudi payroll. This came out when the spineless US House (Senate) finally voted on a bill to limit US participation in Saudi Arabia’s genocidal aggression against Yemen.

In Pakistan, Nawaz Sharif is the most significant Saudi stooge politician. Even when he was dismissed by the judiciary, Nawaz and Shahbaz Sharif still flew out to Saudi Arabia to take further instructions from his masters. At times, Nawaz Sharif has claimed that the vast and irreconcilable assets of the Sharif dynasty are due to Gulf largesse and “business deals”.

As PM, Nawaz Sharif hastily committed himself to joining Saudi Arabia’s aggression against Yemen before parliament voted down this proposal. Later, his Government was instrumental in striking a deal with the Saudis and General Raheel Sharif.

Here are the excerpts of the findings on how US Senators and Congress representatives are sellouts to foreign interests that are antithetical to not just humanity in general but even to America.

“At least five of the 37 Republican Senators who voted against advancing a resolution limiting the United States’s involvement in the war in Yemen have received campaign contributions from pro-Saudi lobbying groups.”

“Roy Blunt, John Boozman, Richard Burr, Mike Crapo and Tim Scott all received financial contributions from firms representing Saudi interests between 2016 and 2017, according to a recent investigation by the Centre for International Policy (CIP).”

“Last year, the oil-rich kingdom spent at least $24m to influence US policy and public opinion, according to disclosures to the Department of Justice made available through the Center for Responsive Politics’ Foreign Lobby Watch tool.”