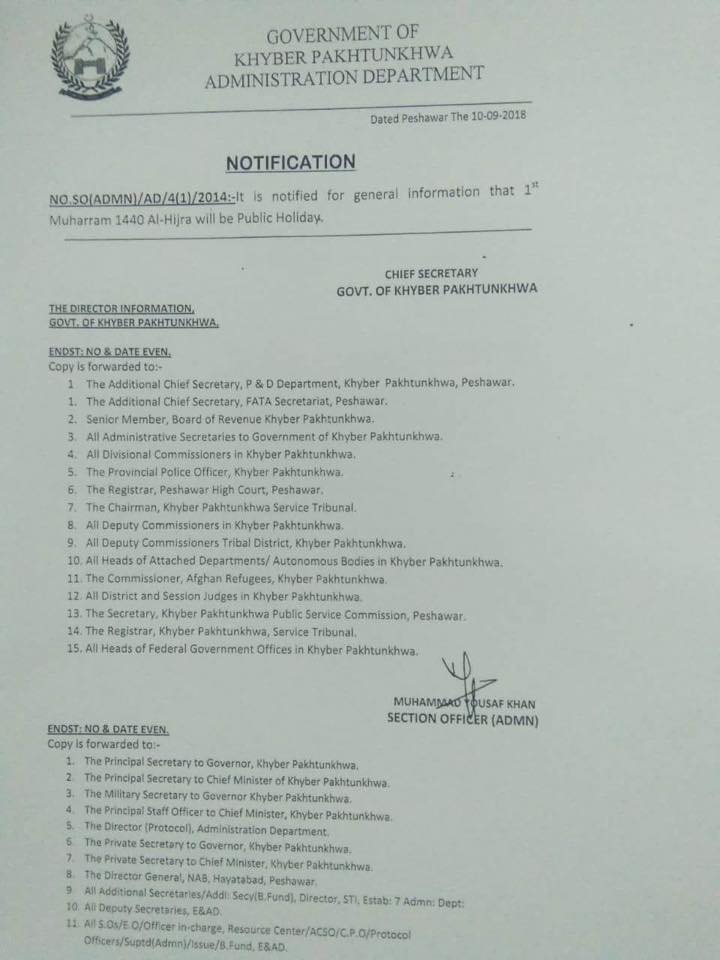 Why Public Holiday on 1st day of Muharram is Surrender in front of religious fascists?

PTI led government in Khyber Pakhtun Khawa-KPK has announced Public Holiday all over the province on the 1st day of the holy Islamic month of Muharram. Apparently this announcement has been made to mourn the day of Martyrdom of Second Caliph Hazrat Umar Farooq (RA). But fact is that 1st day of Muharram is not martyrdom day of Hazrat Umar Farooq(RA). According to all reliable sources of history his martyrdom day was 26th Zil-Hajj not 1st Muhharam.

We all know that it was the banned outfit ASWJ/SSP, which distorted the historical fact about date of martyrdom of Hazrat Umar Farooq R.A and to organize rally and public meetings on 1st day of Muharram for deepening the sectarian divide in the society and made efforts to obfuscate the importance of great martyrdom of Imam Hussain, of his family members and his faithful companions.

Takfiri Fascist elements emerged from Deobandi sect mainly are those, who always made efforts of disputing the status of Martyrdom of Imam Hussain and tragedy of Karabla. So called scholars and writers like Molvi Ghulamullah Khan founder of Jamia Taleemul Quran Rawalpindi, Molvi Abdullah father of Molvi Abdulaziz of Lal Masjid, Mahmoud Abbasi and others from these Takfiri fascist elements wrote books in 60s in which they declared Imam Hussain even ‘Rebellion of the True legitimate Islamic Caliphate’. They declared battle of Karbala a battle between two princes and they admired even Yazeed while calling him legitimate Caliph of Muslim Empire.

After formation of Sipah Sahabah Pakistan in 1984, that propaganda was started to shape in very organized manner and a book titled with ‘Syedunna Yazeed’ was written and distributed on larger scale in the country. Introduction and admiring preface were written for that notorious book were written by Molvi Abdullah chief Imam of the Red Mosque in Islamabad. Mahmoud Abbasi wrote a books denying the events happened in 61 Hijri including battle of Karbala and got admiration from SSP and other Takfiri Fascists. These books were banned after massive protests made by Sunni and Shia both.

When Takfiri Fascists of ASWJ/SSP failed to convince majority of mainstream Sunni population on Anti-Karbala and anti-Martyrdom of Hussain drive then they adopted another strategy to divide Shia-Sunni in the month of Muharram. Now this Takfiri fascist thugs innovated new history about the tragic martyrdom of Hazrat Umar Farooq R.A the second Caliph of Islam. Such takfiri Fascists began to commemorate 1st day of Muhharam as martyrdom day of Hazrat Umar Farooq Radi Allah Anhu and they began to blackmail governments and state institution to announce Public Holiday on 1st Muharram and to declare this day a Martyrdom day of Hazrat Umar Farooq R.A.

Although our central government in Pakistan never bowed down in front of demand of Takfiri Fascists but it was PTI led provincial government in KPK province, which surrendered itself in fornt of Takfiri fascists and very first time announced Public Holiday on 1st Muharram in 2016. And so in KPK today on 1st Muharram of 1444 Hijri/2018 is Public Holiday.

My point of view is that if Government of KPK wants to commemorate(and I strongly endorse it) the martyrdom day of Hazrat Umar Farooq(RA) then it should declare 26th Zil-Hajj as Public Holiday not the 1st Muharram.

SSP/ASWJ, its all supporters and sympathizers are from Deobandi Sunni Hanafi Sect and these are all against commemorating the days of death and birth of Prophets, companions of the Prophet PBUH, Ahlebait, Tabaeen , Sufi Saints and to commemorating such days is an innovation and against Islam. They never celebrate the Birthday of Holy Prophet PBUH and they never organize rallies and hold big meetings on Martyrdom of Hazrat Ammar Yasir and of many other famous Companions of the Holy Prophet PBUH. Even a Fatwa from renowned Deobandi religious seminary Daruloom Banoria Karachi declared the act of organizing mourning procession on 1st Muharram just a political stint having no legitimacy in Shariah or Islam.

State of the Pakistan has already made many compromises in the case of its writ and authority and provided friendly environment religious fanatics and bigots. That negligence has damaged badly religious harmony and interfaith and intra-faith peace. Now this has been another step taken by KPK government  in same bad direction.

Before this ECP has rejected the plea for cancellation of Rah-i-Haq Party having same office holders that were of banned ASWJ/SSP and member of ECP from KPK played main role in that rejection. KPK government last years granted millions of rupees to Darloom Akora Khatak in KPK, which is in fact symbol of Wahhabi-Jihadism and Radical Deobandism and publicly make announcement for its support for Alqaeda and TTP.

It seems that PTI-led KPK government is making compromises on question of the countering sectarianism and religious hatred in province to make happy Takfiri Fascists like ASWJ/KPK.

We have serious reservations on such controversial decision made by PTI led government in KPK and need to stop itself from making such decision in the future.