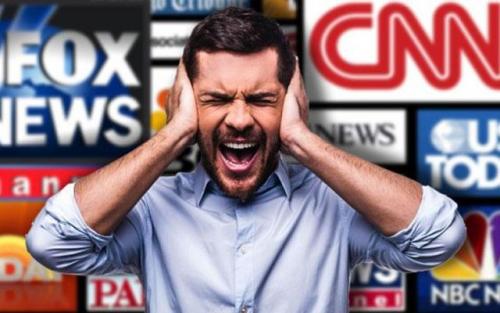 Editor’s note: “Readers should take note and observe the parallels between the Corporatist US propaganda channels and their counterparts in Pakistan such as GEO, DAWN and ARY.

That’s not only a lie; it is a very evil and harmful one, dangerously goading the US President to go even more against Russia (and Iran) (and, of course, against Syria) than has yet been done – but the ‘news’media don’t care about that evil, and that falsehood, and that dangerousness – they do it anyway, and none of them attacks the others for perpetrating this vicious war-mongering lie, that lying provocation to yet more and worse war than already exists there.

And the fact that none is exposing the fraudulence of the others on this important matter, is a yet-bigger additional scandal, beyond and amplifying the media’s common lying itself. Because they all function here like a mob, goading to more and worse invasions, and doing it on the the basis of dangerous lies – that America, and not the Syrians themselves, own Syria.

These lies simply assume that America (probably referring to the US Government, but whatever) somehow “has” or else “had” Syria (so that America can now ‘cede’ it, to anyone); and this assumption (that the US somehow owns Syria) is not only an imperialistic one (which is bad, and wrong, in itself), but it reduces to nothingness the rights (in the minds of the American public) of the Syrian people, to control their own land.

That lie is what America’s ‘news’media won’t expose, but instead they all cooperate with it, when they’re not actually participating, themselves, in spreading these lies.

What they are doing is also to slur Russia, and to slur Iran, for having accepted the request from Syria’s Government, for assistance in protecting Syria’s Government, against the tens of thousands of jihadists who had been recruited throughout the world by the Saudi-American alliance, to overthrow and replace Syria’s Government, to replace it with one that would be appointed by the Saud family (’America’s ally’), the fundamentalist-Sunni royal family who (as the absolute monarchy there) do actually own Saudi Arabia – a monarchical dictatorship, which the US Government calls an ‘ally’.

The evilness of this imperialistic assumption, which is being constantly spread by the US-and-allied ‘news’media, is as bad as is its falseness, because “America” (however one wishes to use that term) never had, never possessed, any right whatsoever to control Syria. Of course, neither does Russia possess such a right, nor does Iran, but neither Russia nor Iran is asserting any such right; both instead are there to protect Syria’s national sovereignty, against the invaders (including the US, and the Sauds’ regime). But the US-and-allied ‘news’media don’t present it that way — the honest way — not at all. Such truths are instead suppressed.

I was immediately struck by this false and evil assumption that the US owns Syria, when reading the June 15th issue of The Week magazine. It contained, under its “Best Columns” section, a piece by Matthew Continetti (“Obama Too Good for America”), which says, among other falsehoods, “Obama was wrong about a lot of other things, too, like… ceding Syria to Russia.”

That phrase, “ceding Syria to Russia” rose straight out from the page to me as being remarkable, stunning, and not only because it suggests that America owns that sovereign nation, Syria. I was especially struck by it because the CIA has several times attempted Syrian coups and once did briefly, in 1949, overthrow and replace Syria’s democratically elected President. But is that really something which today’s America’s ‘news’media should encourage the American public to be demanding today’s American politicians to be demanding from today’s American President? How bizarre, even evil, an idea is that? But it is so normal that it’s a fair indication of how evil and untrustworthy today’s American ‘news’media actually are. I just hadn’t noticed it before.

Publishing such a false and evil idea, without any accompanying commentary that truthfully presents its context and that doesn’t simply let the false and evil allegation stand unchallenged – that instead lets it be unchallenged both factually and morally – is not acceptable either factually or morally, but then I checked and found that it’s the almost universal norm, in today’s US ‘news’media.

On 17 April 2018, CBS News headlined “Lindsey Graham ‘unnerved’ after Syria briefing: ‘Everything in that briefing made me more worried’” and presented that US Senator saying, “It seems to me we are willing to give Syria to Assad, Russia, and Iran.” He was criticizing President Trump as being “all tweet and no action.” He wanted more war, and more threat of war. But when President Obama had repeatedly denied in public that only the Syrian people should have any say-so over whom Syria’s leaders ought to be, U.N. Secretary General Ban Ki-Moon repeatedly contradicted the US President’s viewpoint on this, and he said, “The future of Assad must be determined by the Syrian people.”

If the American people have become so dismissive of international law as this, then is it because the US ‘news’media start with the ridiculously false presumption that “America” (whatever that refers to) is the arbiter of international law, and therefore has the right to dictate to the entire world what that law is, and what it means? Is America, as being the dictator over the whole planet, supposed to be something that Americans’ tax-dollars ought to be funding — that objective: global dictatorship? How does that viewpoint differ, then, from perpetual war for perpetual ‘peace’ — a dictum that’s enormously profitable for America’s big ‘Defense’ contractors, such as Lockheed Martin, but that impoverishes the general public, both in America, and especially in the countries (such as Syria) where ‘our’ Government drops bombs in order to enforce its own will and demand, that: “Assad must go!

In fact, as any journalist who writes or speaks about the Syrian situation and who isn’t a complete ignoramus knows, Bashar al-Assad would easily win any free and fair Presidential election in Syria, against any contender. His public support, as shown not only in the 2014 Syrian Presidential election, but also in the many Western-sponsored opinion-polls in Syria (since the CIA is always eager to find potential candidates to support against him), show this.

On 17 December 2016, Eric Chenoweth, a typical neocon Democratic Party hack, headlined “Let Hamilton Speak: Recapturing American Democracy”, and he wrote: “Trump’s statements and appointments make clear he intends to tilt American policy to serve Russian interests: ceding Syria to Russia by ending support to pro-Western rebels; possibly lifting economic sanctions and recognizing the annexation of Crimea; proposing an alliance with Russia in the war on terror while remaining uncommitted to the defense of NATO allies, in particular the Baltic countries vulnerable to Russian aggression. Restoring American Democracy When they meet on December 19, Republican Electors who reflect on their constitutional duty should not then affirm Trump’s election.” Those “pro-Western rebels” in Syria were actually led by Al Qaeda’s Syrian branch. Without them, the US regime wouldn’t have had any “boots on the ground” forces to speak of there.

In fact, the US regime has actually been fronting for the Saud family to take over control of Syria if and when Syria’s Government falls.The Saud family even selected the people who in the U.N. peace talks on Syria represent ‘the rebels’ — the Sauds, who have been Syria’s enemy ever since 1950, selected ‘Syria’s opposition’, who were now seeking to take over Syria if and when ‘America’s moderate rebels’ succeed. Both Al Qaeda and ISIS are actually fundamentalist-Sunnis, like the Saud family are, and Assad’s Government is resolutely non-sectarian. Assad himself is a non-Islamist Alawite Shiite secularist, which virtually all fundamentalist Sunnis (such as the Sauds are) are taught to despise and to hate — especially because he’s Shiite. The US regime knows that neither it, which is considered Christian, nor Israel, which is theocratically Jewish, could practically succeed at imposing rule in Syria, but that maybe the Sauds could — so, they are the actual leaders of the ‘pro-Western’ forces, seeking to replace Syria’s secularist Government. Overthrowing Syria’s Government would be their victory. It would be the Saud family’s victory. But this fact is kept a secret from the American public, by the US ‘news’media.

Back on 17 September 2016, shortly before the change in US Administrations, Obama bombed the Syrian Government’s garrison in Der Zor, or Deir Ezzor, which is the capital of Syria’s oil-producing region. He did it in order to enable ISIS forces, which surrounded the city, to rush in and conquer it. Obama did this only eight days after his Secretary of State, John Kerry, had conceded to the demand by Sergei Lavrov, Russia’s Foreign Minister, Russia’s demand that in a cease fire, Russia be allowed to continue bombing not only ISIS there, which Kerry agreed should continue to be bombed by both the US and Russia, but also Al Qaeda’s forces — which until 9 September 2016, Obama refused to allow to be bombed during a cease-fire. But, finally, after a year of deadlock between Russia and the United States on that crucial issue, Kerry and Lavrov both signed a cease-fire agreement, and it allowed both ISIS and Al Qaeda-led forces to continue being bombed. (Russia had been bombing both, ever since 30 September 2015, when Russia began its bombing campaign in Syria.)

That cease-fire went into effect on September 12th. Then Obama, unannounced — and a great disappointment to his Secretary of State, who wasn’t informed of this in advance — broke the agreement, by bombing the Syrian outpost in Deir Ezzor — and that’s the moment when Vladimir Putin quit his efforts to get agreements from Obama, because Putin now recognized that Obama was totally untrustworthy.

Already by late September of 2015, even prior to Russia’s having been requested by President Assad to enter the war in order to speed up the defeat of what Washington still calls ‘the rebels’, it was clear that Washington (actually Riyadh) wasn’t going to take over Syria; and Americans were — and are — being taught by the ‘news’media, that this was because Obama was ‘weak’ and didn’t care enough about ‘human rights’ in Syria, and about ‘democracy’ in Syria. So, on 28 September 2015, Matt Purple at the libertarian “Rare Politics” site, headlined “Pentagon admits that the Syrian rebels it trained handed over weapons to al Qaeda”, and he wrote “Neoconservatives wail that President Obama is ceding Syria to Russia — but the reason the Russians are taking the lead is precisely because America has sidelined itself.” But the US regime hadn’t at all “sidelined itself”; it continued — and it continues to this day — its invasion and occupation of that land. Trump’s policy on Syria is basically a continuation of Obama’s — and it’s not at all “ceding Syria to Russia,” or “ceding Syria to Russia and Iran.”

Because of America’s ‘news’media, it still isn’t “ceding Syria to the Syrians” — as Ban ki-Moon and international law would. That wouldn’t be profitable for Lockheed Martin etc. (whose biggest customers other than the US Government are the Sauds, and Trump alone sold $400 billion of US weapons to them); so, it’s not done.

Syria’s sovereignty is utterly denied by the US regime, but if the US regime were to succeed, the big winners would actually be the Saud family.

Do the American people have sovereignty, over ‘their’ (our) Government? US ‘news’media effectively ban that question. Perhaps what controls the US Government is the Saudi-Israeli alliance: the Sauds have the money, and the Israelis have the lobbyists. Of course, the US ‘news’media are obsessed whether Russia controls the US Government. That diversionary tactic is extremely profitable to companies such as General Dynamics, and America’s other weapons-manufacturers, which thrive on wars — especially by selling to the Sauds, and to their allies (and, obviously, not at all to Russia).