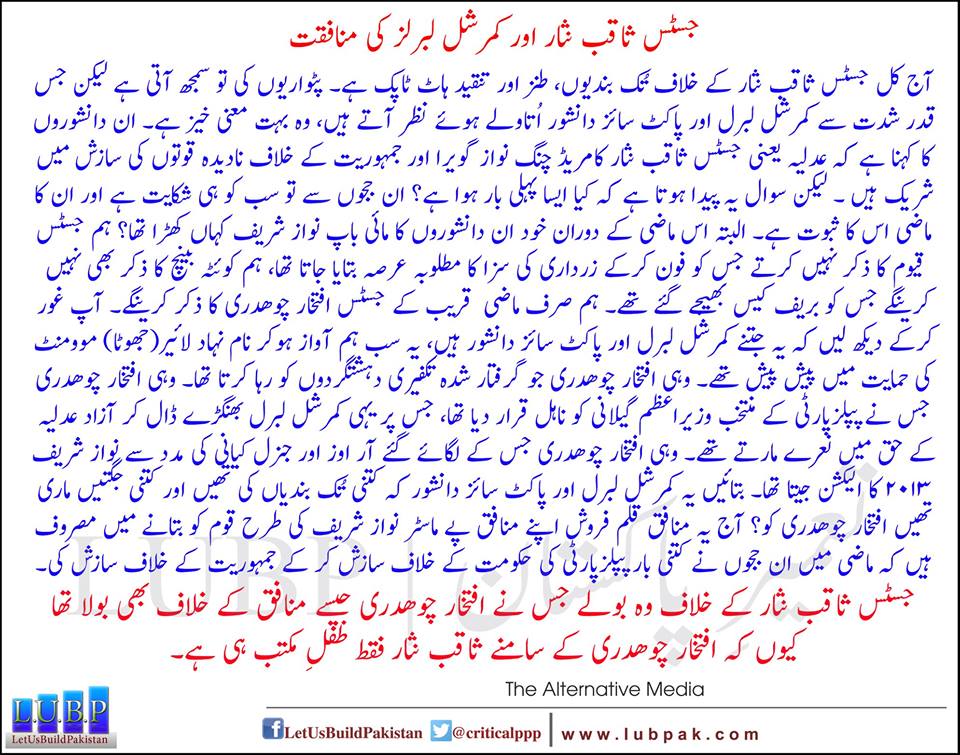 It was early 2007, Musharraf was ruling without any major problems. There was very little resistance against him in electronic media and on roads. In the electronic media there were several very popular shows including Dr. Shahid Masood, Hamid Mir and Nusrat Javed. The focus of these programs were either on the drone attacks by US and Pakistan handing over terrorists to US. Issues like Aafia Siddiqui and missing terrorists were being raised by the right wing media led by Geo. The fake liberal likes Nusrat Javed were few in the main stream media and they usually will defend in such a way that will support right wingers assertion. Most of the time “liberal” anchors focus will be in bashing Musharraf for being dictator, in a way supporting the right wing counterparts for other reasons.

They were all enjoying an unexpected but pleasant freedom of speech grant by no other than the dictator himself. In the hindsight it is not difficult to understand that the guarantors of this freedom of speech were people like General Kyani and other 3-star generals who were planning to get rid of Musharraf.

Social media at that time was still in its infancy. The channels like twitter, facebook and whatsapp were not as popular as they are now. But there were alternative channels in the shape of very popular and active web forums and blogs. The most popular among them were Pakistaniat, TeethMaestro, PKPolitics and LUBP. These were very vibrant sites where a lot of people usually living abroad had hot discussions.

Then all of a sudden 9th March 2007 happened. And the images of Iftikhar Chaudhry being ducked into a car by a policeman all across the world. And what is now known as Judicial movement was started.

This was the time when Social Media Pakistan came out of its infancy. The unknown and unexpected potential of social media was realized by the military establishment of Pakistan during those days. Incidentally this huge potential was not due to the paid social media activism, it was genuinely driven by the passionate social media activist particularly those who wanted a liberal democratic Pakistan.

I was one of the very first few social media activist. On PkPolitics and Pakistaniat I will be one of those regular contributors whose articles, comments will be shared by all and sundry. It is pertinent to note that now very popular social media activists like Raza Rumi, Marvi Sirmid, Gul Bukhari, Ali Arqam etc. will have very small footprint. Raza Rumi with his own website and also contributing on the Pakistaniat will be the most active one.

During the “Judicial Movement” , right and left had joined hands against Musharraf, there were very few people likes of LUBP (Abdul Neshapuri) who will be trying to expose how takfiri elements among both right and left are running the “Judicial Movement”. I remember engaging with him on several occasions to tell him how it is essential to get rid of the Don regardless of how we get.

It was those days when people like Marvi Sirmid, Raza Rumi will be quoting my articles and quotes against Musharraf and military in general. When Musharraf put the “media” in “chains” the people like Nusrat Javed who program was banned for few hours/days and Hamid Mir both were in the same protest with the poster “media in chains”.

Time flew, Musharraf was ousted by the sheer power of social media, even Kyani and associates had to accept Zardari the ultimate evil as the President of Pakistan. I remember back then I wrote several articles praising Zardari’s credentials as one of the best statesman and President has ever produced.

However as PPP came into power after the 2008 elections, military establishment of Pakistan had realised how much potential social media has in order to shape the opinion of “people” (those living in urban areas of Pakistan). And they turned there attention towards social media.

Twitter, Facebook and Whatsapp were added to the list as they were easy to manage while keeping the facade of being independent. Paid social media teams were created. And the voices who were going against military establishment were threatened. People like Khurram Zaki were murdered, Abdul Neshapuri and several other families were threatened. Pretty soon there were two powerful factions in social media, just like there were in Pakistan’s electronic media.

Majority of the social media activists who were looking for jobs at that time found very lucrative jobs in Pakistan. Ali Arqam got a good job in Dawn, Gul Bukhari, Raza Rumi etc all got pretty well paid jobs after 2009 and every year they kept moving up in the ladder. Just today I was watching Gul Bukari praising Nawaz Che Gavera in his “Vote ko izzat do” seminar. Raza Rumi and Marvi Sirmid have got much richer than ever. Nusrat Javed has been making good money from Dawn.

So how does “Media” gets in chain. Well here is how.

Fast rewind to 3rd November 2007, Musharraf puts a complete blackout on Geo & ARY, remember unlike 2018, both ARY and Geo had the same agenda of getting rid of Musharraf, they even had a common liking for Imran Khan being the best politician in Pakistan. Musharraf did not have many (any?) voices in media for him. His control on the channels were completely diminished as they were under the control of General Kyani.

In more recent future, 2014 Hamid was was attacked by unknown assailants in Karachi, this was the time when DG ISI was supporting IK in place of NS. Both of these two incidents are considered as the biggest attack on the freedom of expression in Pakistan.

People like Nusrat Javed in their every second program quote how they were banned by Musharraf in 2007 and how they stood up against the dictator and snatched their freedom of expression from the dictator. They count their “ultimate” sacrifices for being banned for 15 days.

In the next article, I will explain how Amir Liaquat Hussain has got more channel closed than number of days Nusrat Javed and ilk were banned by Musharraf.

I will tell you how more people have died then number of bullets fired at Hamid Mir.

Media is in chain!!!