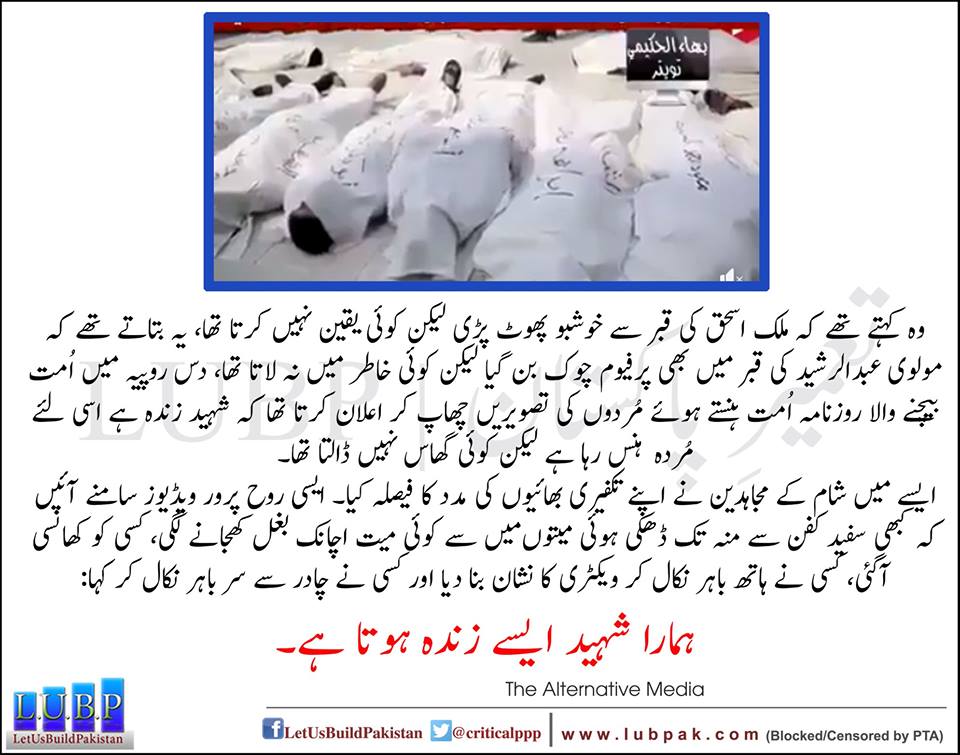 For decades, Pakistan’s liberals misrepresented the actual ground reality of Deobandi militancy against all other faiths and sects.

“Oh it is a 1400 year old war between the House of Prophet Mohammad and the House of Yazeed”. Often left unsaid was the seemingly obvious “and we support Yazeed” conclusion.

Since 1978 in particular, the SAME Takfiris who massacred 25,000 Shias ALSO killed 50,000 Sunnis ! Hindus, Christians, Ahmadis and Sikhs were not spared by these Takfiris either. In spite of clear evidence to the contrary, Pakistan’s commercial liberals and corporate leftists stuck to their dishonest narratives. They continued to obfuscate Deobandi militancy in Pakistan in increasingly discredited False Binary terms

This is a “Sunni vs Shia/Yazeed vs Hussain/Saudi Arabia vs Iran” proxy war!” chimed these liberals!

It was almost as though they wished that Pakistan’s largely peaceful Sunni majority could be goaded into violence. So far they have failed miserably in this incitement. Since the last century, an increasing number of Pakistanis have called out this dishonest narrative of False binaries. One should ask these liberals where the mythical Iranian proxies in Pakistan are and can they take on the Sipah Sahaba Taliban terrorists supported by Nawaz Sharif and to a lessor extant, by Imran Khan.

But Pakistan’s commercial liberals have learnt nothing. Or rather, they choose to remain obtuse. Now they are misrepresenting Syria and Yemen from the same pathetic sectarian prism that is a reflection of their own subconscious bigotry.

In Syria, a secular and pluralist society has been attacked by transnational Al Qaeda affiliates. The Al Qaeda affiliates massacring Syrians and using them as human shields have the financial, logistical and diplomatic backing of Saudi Arabia, United States, France, UAE, UK, Israel and Turkey amongst others. This is a reality that is completely blacked out by their apologists; who continue to spew their own sectarian neurosis onto a geo-political conflict.

Religion is not an important factor in a multi-faith country like Syria. The Syrian president is from an ancient sect and mainstream Shias don’t even agree with Alawi theology. Assad’s closest partner in Syria is his wife, a highly educated Sunni. In a hostile neighbourhood of Salafi terror groups, Assad has remained a staunch protector of Syria’s Sunnis, Shias, Druze, Alawis and Christians. Syria is the last secular country remaining in the Middle East. Russia and Iran support Syria on clear strategic basis and religion has nothing to do with their support.

When Saddam was a darling of the Wahhabi monarchies and the West, Syria was the only country that came to Iran’s aid. While Saddam boastfully used chemical weapons against the Iranians fighting a foreign sponsored invasion, Syria was the one country that stood by them. Iran is returning that favour. Similarly, Iran and Russia have publicly made it clear that they would rather defeat GCC-West backed Al Qaeda and ISIS in Syria as opposed to fighting them in the streets of Moscow and Tehran.

On the other side of this geo-political conflict are various Al Qaeda affiliates and their apologists and backers. Those in Pakistan who are framing this in terms of sectarian prejudice and only tolerate the anti-Syria propaganda of Al Qaeda, happen to come from Jamaat e Islami/Sipah Sahaba/Jaish/LeT backgrounds. They also called come from urbane backgrounds where they camouflage their sectarian prejudice under artificial liberal veneers. The second group also includes Uncle Tom Shia sellouts and the easily impressionable young Turks desperately seeking approval from more seasoned opportunists.

On the issue of Syria, It is easier to engage with the half-wit village cleric than it is with these sectarian liberals. They are simply unwilling to tolerate any alternate source that challenges the Pro Al Qaeda propaganda from CIA-infected sources such as WaPo etc.

A: “If Syria is a Sunni vs Shia war, then what why are overwhelming Sunni urban centers like Aleppo and Damascus supporting Assad? If Assad is such a sectarian, why is his Sunni wife front and centre in his public interactions with Syria’s peaceful Sunni majority. Why are Christians and other religious minorities safe under Assad? Can you show me a sectarian statement by Assad as opposed to the vicious sectarian polemics by those attacking Syria? Why have close to 1 million Syrians who are overwhelmingly Sunni returned to areas liberated by the Syrian government from the clutches of Al Qaeda? And why is Al Qaeda being misrepresented as “moderate rebels”?

Response by B: “Shut up, you Sunni Genocider! Your Khamenai and your Prophet’s family want to drink the blood of Sunni children. Assad’s wife is not a Good Sunni. She is too educated. Shias want to annex Sunni lands and dominate the World. Assad breathes chlorine and farts Sarin. Russians and Shias are habitual liars. The White Helmets are the Infallible Truth. How dare you expose the fact that the White Helmets stage their rescues and participate in atrocities perpetrated by Al Qaeda. Disgraced and terminated NHS employees of Pakistani-British origin in Idlib are a more reliable source of information on chemical attacks than Syrian journalists and MIT rocket scientists”

If you think that responses such as B are straw mans, then posting the actual vituperative attacks would be a far worse indicator of B.

Many of us who are trying to reason with Side B have heard worse arguements that are insulting not just to Sunnis, Shias, Syrians, Russians, Iranians etc. They are an insult to common sense.

Some of the most insidious obfuscations on Syria comes from some Uncle Tom Shias, desperate for acceptance and for that plum Al Jazeera posting.

The illegal foreign intervention in Syria has claimed close to half a million lives as per some estimates. Children have been the worst victims of this senseless foreign intervention. Not only have they been deliberately targeted and used as human shields in Fuah and Kafriyah by the Al Qaeda “rebels”, they have also been used as “props” to misinform the world and incite more hatred against Syria.

Many of us want this conflict to attend. Others imply want to omit the truth and incite more war.