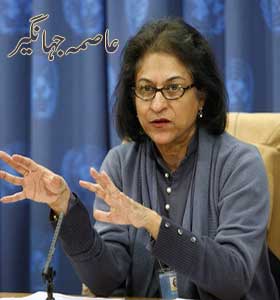 Editor’s note: Our memories of Asma Jehangir go back to the period between 1970-1999 when she stood up to the Sipah Sahaba mobs and protected their rights of our Pakistani Christian comrades.

To raise voice for victims of blasphemy and for religious minority was not easy job,which Asma Jhangir always did without fear. She faced Zia with courage and brave. I always admired her much in those days. Although in last days she extended her support to Nawaz Sharif and ignored crimes of corporate capitalists and that was big reason of my differences with her but no doubt she worked hard for peasants, bounded laborers, rape victim women. Personally i met her many times and when she contested election for President of Supreme Court Bar Association then i worked for her very closely and we refuted those reporters who were making table-news stories.

She had invited me specially after she elected President of SBA and admired me and other reporters and columnists for their support. I saw her closely during struggle for ownership of tenants in Okara and Peeruwal Khanewal. No doubt she was brave lady. I boldly showed my disagreement on many issues like issue of Shia genocide and its perpetrator’s identity and Nawaz Sharif’s fight in the name of democracy.

I mentioned her many times in dozens of tweets but she never blocked me neither she used abusive remarks. Last time i was in Lahore and i went HRCP head office where suddenly we met and at that occasion, one of my friends taunted about my tweets and Facebook posts but she just smiled,uttered nothing bad.

Fearless, bravest she was.