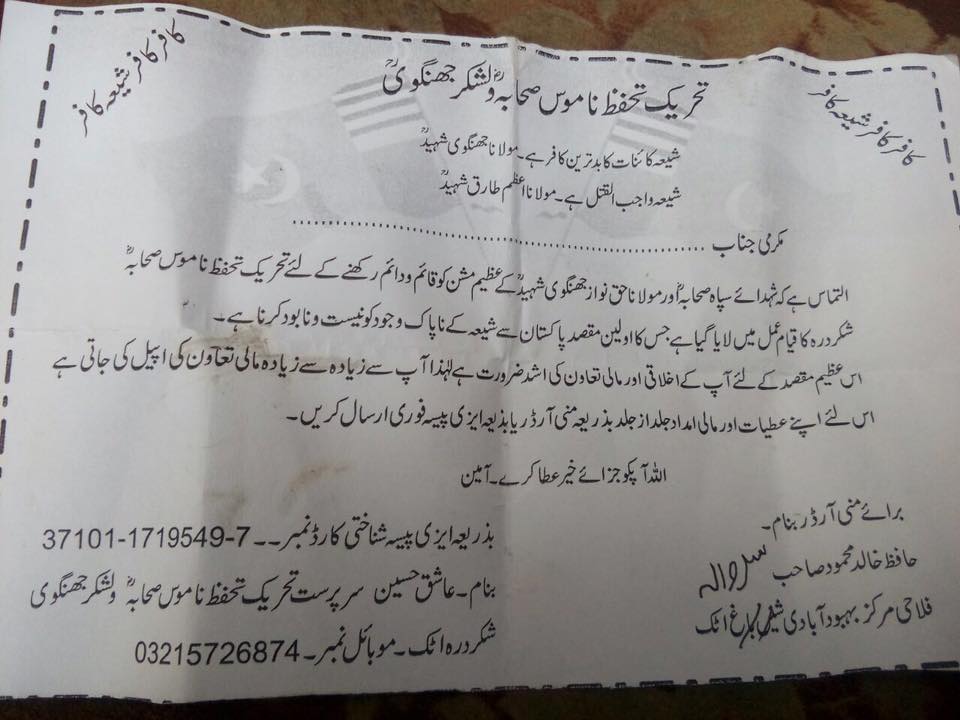 Have you seen Pakistan’s Neoliberals from the Sethi-Cyril-Beena-Asma Jehangir Mafia condemn this hate campaign by Sipah Sahaba aka ASWJ.

Just because #ASWJ is a government ally of the “liberal hope” PML Nawaz, this Mafia does not speak out clearly and without equivocation against #DeobandiTerrorism. If Sunni Barelvis had done even a fraction of what Deobandis have inflicted on Pakistan, this Mafia of commercial liberals would be working overtime. This would have been blasted all over the media.

Have you ever wondered why the (mis)use of the Blasphemy law by Deobandis never get the same coverage as the case of Mumtaz Qadri?

Mumtaz Qadri murdered one person. Deobandi terrorists of Sipah Sahaba have murdered 25,000 Shia Muslims because some Shia Muslims (out of a total population between 25-35 million) were critical of Caliph Yazeed and the Ommayad Regime.

Why does this not merit PROPORTIONAL outrage. Is it because Pakistan’s liberals and Atheists share the same sectarian tendencies as Sipah Sahaba.

It is precisely because of the hypocritical outrage against the blasphemy law by sellout establishment operatives like #AsmaJehangir and other Saudi sponsored toadies that this precedent was mainstreamed in Pakistan. The blasphemy law was established by Abu Nawaz Sharif aka General Zia ul Haq to protect the honour of his icons like Yazeed, Mao Tse Tung, Hitler, Churchill, Stalin and Kissinger. Nawaz Sharif and his toadies played a major role in making sure this law got established in Pakistan. Pakistan’s commercial liberal Mafia continues to collaborate with Nawaz Sharif in its weak, selective and cosmetic opposition to this law.

Those who have been blessed by the Divine don’t need a Sipah Sahaba terrorist squad to protect their honour. And Sipah Sahaba has proven that they are more concerned with worshipping and protecting the honour of Yazeed.