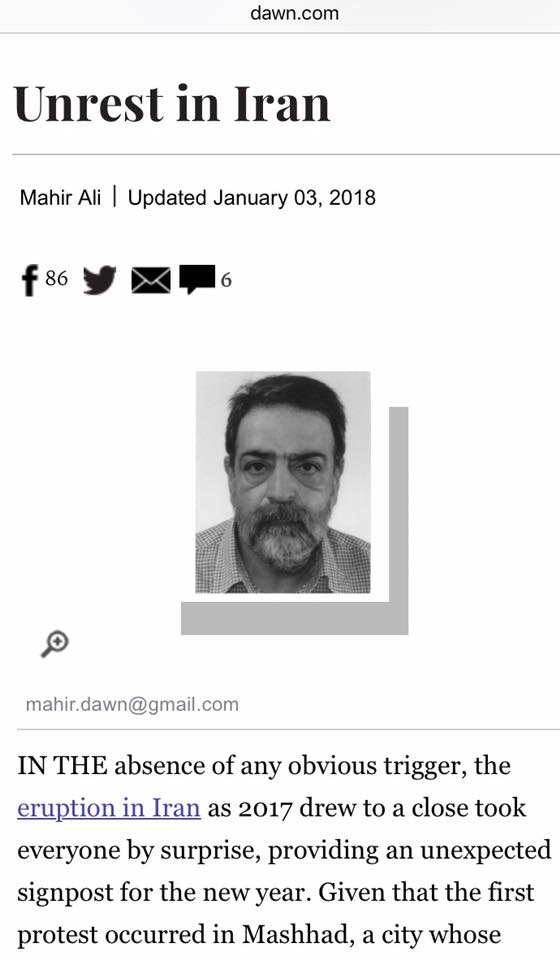 Like his brother, “Comrade” Tariq Ali, Mahir Ali reminds us that underneath the thin veneer of pseudo liberal rhetoric, significant sections of the Atheist Left in Pakistan are infected by Deobandi sectarianism.

During 2003-4, Tariq Ali obliquely justified Al Qaeda/Zawahiri’s suicide attacks that claimed the lives of thousands of Shia Iraqis. For sectarian bigots with a history of vicious anti-Shia animus, Tariq Ali misrepresented Al Qaeda as the “Resistance” to the illegal invasion by the United States. While the United States is correctly condemned for its illegal invasion of Iraq, Al Qaeda’s suicide attacks were on the basis of sect and supported by US allies in the region such as Saudi Arabia and Jordan.

Like his dodgy brother, Mahir Ali does not ONCE mention the crippling sanctions imposed against Iran by the United States which are the cause of the worsening economic climate in Iran. Most of Mahir Ali’s article (for DAWN, January 3, 2018 are literally the talking points of the CIA-affiliated Washington Post. Jeff Bezos, the owner of both Amazon and the Washington Post has received $600 million from the CIA.

Mahir Ali’s puny attempts at nuance are drowned out by a familial sectarian bias. His ludicrous conclusion that Iran’s political rivals are not encouraging further unrest is contradicted by quotes shared within his own article as well as by ground realities. The drumbeat of intervention against Iran has already been proliferated amongst the various propaganda outlets that comprise MSM in America. Various Neocons like McCain etc have publicly stated their support for elements within the MeK – a cult militant group that was on the US terrorist watchlist as recently as 2012 before being blessed by Hillary Clinton.

Pakistan’s liberals/Atheists/leftists are at best hypocrites as their Salafi-Deobandi sectarian prejudices are so easy to spot. Their opposition to the Blasphemy law does not extend to tolerating a critique of Yazeed Bin Muawiya and/or the political institution of Caliphate.

Their Atheism is limited to anti Sunni and Anti Shia traditions and does not extend to their deep and blind reverence to ancient and modern day Caliphs and Wahhabi “Reforms”. Their contempt for clergy is limited to Tahir ul Qadri or Amin Shaheedi; while their devotion runs deep for Deobandi hate clerics like Tahir Ashrafi, Ahmad Ludhyanvi and Mullah Fazlu.

There are many who disagree with elements and leaders of the Iranian clergy. But that does not mean that they want to collaborate with Neoconservatives to destroy another sovereign country. They have witnessed what has happened to Libya, Syria and Iraq and fully support Iran’s efforts in fighting Saudi-West-Israel backed Al Qaeda/ISIS in Syria, Iraq and Yemen.

If one is honest about supporting the protests in Iran, then one must first condemn the crippling economic and humanitarian sanctions imposed on Iran by the United States – often in infringement of internationally accepted multinational treaties. The sanctions form the basis of the mainstream protests.

Forget about the double standards of these sectarian bigots posing as lefty-liberals when it applies to Yemen, Bahrain and Syria. These are the same sellouts who were too busy defending Zia ul Haq spawn like Nawaz Sharif when he brutally crushed the Model Town protests and refused to even acknowledge the protests in Parachinar.