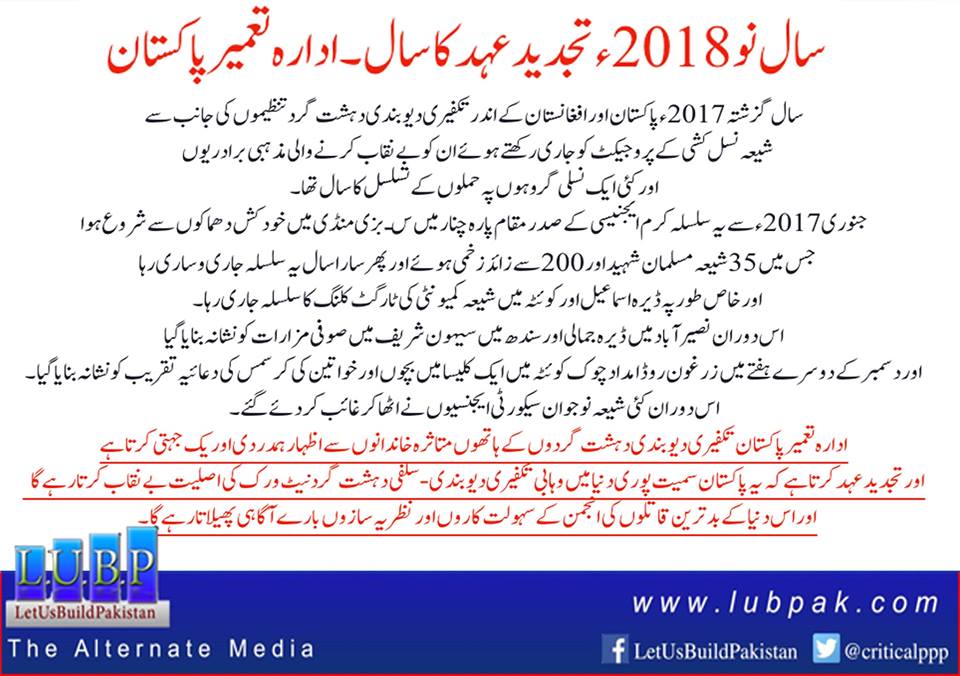 Note: This review has been compiled through considering many web-news sites and with help of those data provided Shiite news and human rights organizations.

We can see trend of obfuscation of deobandi Takfiri identity of perpetrators of slow Shia-genocide in Pakistan while reviewing faith based terrorism in Pakistan.

The beginning of 2017 saw a deadly attack in Eidgah Market in Shia majority Parachinar city of Kurram Agency. Shia Muslims had gathered to buy and sell fruits and vegetables in the agency’s major town when a powerful explosion struck leaving more than 25 Shia Muslims dead and over 60 injured.

The wounded were rushed to Agency Headquarters Hospital, but those with critical injuries had to be shifted to Peshawar as the facility in Parachinar lacked the material required for proper treatment.

However, the state of the hospital in Parachinar remained the same during emergency situations in the explosions that followed.

In February, Lahore fell target to terrorist designs when a suicide bomber detonated his explosive vest near the Punjab Assembly as hundreds of people gathered for a protest.

The Lahore blast claimed the lives of at least 14 people, including senior police officers.

The protest near the Punjab Assembly was being held by chemists and owners of medical stores against the drug rules imposed by the provincial government.

Hardly three days had passed since the Lahore incident when another powerful explosion took place in Sehwan city. On the evening of February 16, hundreds had gathered at the shrine of Lal Shahbaz Qalandar for the dhamaal – the place was jam-packed when a loud blast occurred.

The incident left at least 90 people dead and over 300 injured. Just like Parachinar, in Sehwan too, there was no proper health facility where blast victims could be treated, compounding the agony of the victims and their families.

On March 31, terror returned to yet again to Parachinar. A busy marketplace outside a Shia mosque Imam Bargah was targeted by a powerful bomb explosion, killing at least 24 Shia Muslims and leaving 90 others injured.

This time too, locals said the injured persons and their attendants were faced with difficulties at the Agency Headquarters Hospital Parachinar due to the dearth of medical facilities and staff.

In April, Lahore was once again targetted by terrorists, this time a census team, escorted by Pakistan Army was the target.

At least six people were killed and 15 others were wounded when a suicide bomber detonated its explosives on Lahore’s Bedian Road.

While speaking to Geo News, a spokesperson for the Punjab government, Malik Ahmed Khan, had said the target seemed to be the census team and the soldiers accompanying them.

In May, it was Balochistan that became the target of terror attacks not once, but multiple times in the months which followed.

On May 12, a suicide bomb blast targetting the convoy of a senior politician in Balochistan killed at least 27 people while 30 others were injured.

The incident occurred in Mastung district of the province — not very far from the provincial capital — where a vehicle carrying Senate Deputy Chairperson Maulana Abdul Ghafoor Haideri was struck by the blast.

The targetted person, Haideri, escaped the attack with light injuries but his driver and an aide were killed.
Turi Bazaar, Parachinar – June 24

For the third time in the year, another major attack took place in Parachinar, Kurram Agency.

This time, twin blasts occurred in the bustling Turi Bazaar area of Parachinar, where Shia Muslims were shopping for iftar and Eid, which was to be celebrated in most parts of the country the following day.

At least 45 Shia Muslims were killed and 300 others were wounded in the explosion. While speaking about the incident, a local official, Nasrullah Khan, had said the first explosive device detonated when the market was crowded with shoppers. He added the second blast took place when people rushed to the site to rescue the wounded. The twin blasts hit Parachinar just a day before Eid despite security arrangements being in place in the area.

In July, it was Lahore again, when an explosion in a busy vegetable market claimed lives of at least 26 people, including nine policemen.

The attack was a suicide blast, the bomber detonated his explosives amid a crowd in Kot Lakhpat Sabzi Mandi near Arfa Karim Software Technology Park on July 24.

The explosion came a few days after the Army started its operation, Khyber IV, in Rajgal Valley of Khyber Agency in the Federally Administered Tribal Areas.

After Eid celebrations were marred by violence, an attempt was also made ahead of Independence Day, with a huge suicide explosion targetting Pakistan Army personnel in Quetta.

At least eight army men were martyred and seven civilians killed in the blast that took place in a vehicle at Pishin bus stop on August 13.

The subsequent fire caused by the explosion took the surrounding vehicles into its folds.

After a month’s lull, the people of Balochistan witnessed terrorism once again, a suicide blast at Fatehpur shrine in Jhal Magsi district of the province on October targeted worshippers as they visited a Sufi shrine.

At least 20 people were killed and 33 others were injured when a suicide bomber blew himself up after he was intercepted by police guards on duty outside the shrine.

It was said that the shrine was packed with people at the time of the incident – many had gathered to attend the anniversary celebrations of Syed Cheezal Shah.

As the year neared its end, a students’ hostel was targeted in Peshawar, leaving nine dead and more than 30 injured.

Early in the morning on December 1, Directorate of Agriculture Extension on University Road, Peshawar was attacked by terrorists.

SSP Operations Sajjad Khan said five attackers wearing suicide jackets reached the compound in a rickshaw.
They were said to be wearing burqas in the rickshaw so as to avoid detection.

The police official said the attackers’ first target was the security guard of the premises, following which they made their way inside towards the students’ hostel of the Agriculture Training Institute, attacking whoever crossed their path.

A church in Quetta was attacked in the week leading up to Christmas, killing nine and injuring at least 50 others.

Bethel Memorial Methodist Church was hit by terrorists when a service was underway with at least 400 people in the hall for prayers.

Although the security personnel managed to stop the terrorist from wreaking havoc inside the church, families who lost their loved ones were left devastated regardless, not being able to celebrate Christmas the way they would have wanted to.

According to daily Pakistan Today,on 25 February,2017, At least three shia persons became victims of target killing in a village of Dera Ismail Khan on Sunday morning.

The violent act occurred at the village Ghosar in tehsil Parwa. In reaction, people of the area blocked the Indus highway for traffic. Police official said that three friends namely Ali Zafar, Saqlain and Jamil were on a walk to fields late on Sunday morning when they were ambushed by unknown armed persons.

The armed persons opened indiscriminate firing killing all three on the spot, and the assailants succeeded in escaping on a motorbike.

Mukhtiar—father of Saqlain; a leading figure of Shia community—had also been a victim of target killing. This act is considered a continuation of Shia genocide by #ASWJ aka #SSP aka #LeJ in DI Khan.

On 11 August,2017, Another Shia notable of Dera Ismail Khan embraced martyrdom due to firing of proscribed ASWJ terrorists on Sunday. The Shia Muslims’ martyrdom toll in this district of Khyber Pakhtunkhwa rose to 3 in three days as two Shia policemen were gunned down on Friday.

On November 21,2017, A prominent local Shia poet was gunned down here on Tuesday in Dera Ismail Khan-KPK
Terrorists of Takfiri Deobandi organization #ASWJ aka #SSP aka #LeJ opened fire on Sabir Hussain Sabir, a poet and narrator who spoke at religious gatherings, when he was sitting at his shop near Chodwan Morr in Parwa tehsil. His funeral prayers were offered at the Cha Syed Munawar Imambargh in Dera Ismail Khan. During the last one week, three persons belonging to the Shia sect were target-killed in the district. The fresh incidents of target killings have created a sense of fear among the people.

Shia Target killing in Islamabad in Month of November, 2017:

On 28th November 2017, at least three Shia people were killed and five injured in firing by Takfiri Deobandi terrorists outside in Shia mosque in Islamabad.

Surprisingly South Asia Terrorism Portal’s official website did not mention this attack on mass under category of ‘sectarian attacks on mosque in Pakistan’. Its chart shows only one incident of sectarian attack in mosque which had occurred in Lahore where Takfiri Deobandi terrorist organization opened fire on a car in Sabzazar colony area in Lahore but that was not attack on Ahmadiyya worship place.