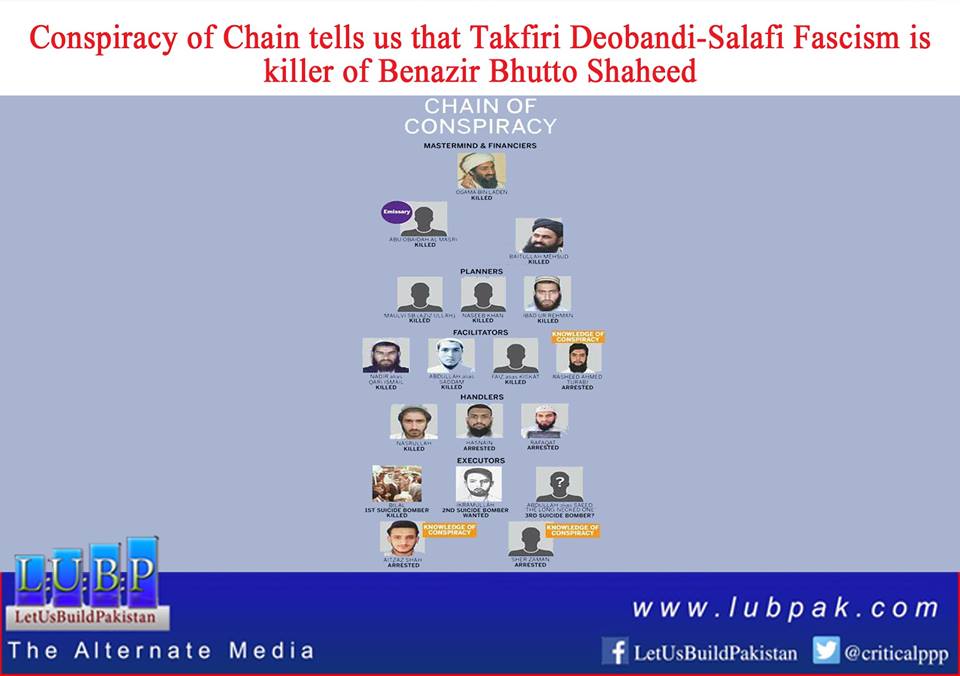 Talking heads create confusion by deflecting away from the Taliban and by talking about the establishment as if the two (Taliban and establishment) are separate entities. The logical response should be : Is there really a difference.

“None of these talking heads have pointed out the simple fact that during his presidency, Zardari could not even determine samosa prices – let alone determine the outcome of the most delicate investigation in the history of Pakistan”

To see Pakistani media bias against the Bhuttos and their surviving heirs is a hard task. The sheer level of dishonesty and a constipated smug quality takes a lot of patience. It is nearly as bad as sitting through the marginally more suave propaganda of CNN and BBC.

Last night, on the 10th anniversary of Benazir Bhutto’s murder, Naheed Khan was given an unchallenged platform to spew her dishonesty and bitterness. FYI, Naheed Khan was the controversial former secretary of Benazir Bhutto who immediately betrayed the party after Benazir’s death. She has been accused of misusing her position to create divisions within the PPP on behalf of the establishment. No one has seriously challenged her on why she never stopped Benazir Bhutto from emerging from the sun roof of the car to greet her supporters. There are unconfirmed reports that Naheed herself goaded Benazir to do so, thereby resulting in her death. With Benazir and Amin Faheem, the other occupants of the car now departed, there is no one to question Naheed Khan.

The fact that Benazir’s adult kids want to have nothing to do with backstabbing traitors like Naheed speaks volumes. As does the fact that all the major channels as well as Express Tribune (a rabidly Pro Nawaz Sharif right wing rag) use her as a source for their attacks on Bhuttos and the PPP.

Then there was Kashif Abbasi and Shafqat Of PTI. Kashif has perfected the constipated smug look to dismiss and interrrupt differing viewpoints. Not that there were any in last night’s typically fixed panel. Shaafqat has pimped himself to every political party, including but not limited to the PPP, PML N, Musharaf, “civil society” and now PTI. A career turncoat.

And then of course, there was the spineless Murtaza Solangi who instead of challenging the dishonesty of the prejudiced panel and host, simply hemmed and hawwed his surrender through the routine propaganda points. And this person had been given a plum job during the last PPP government – a serious disability of the party to not recognise and hold to account those who regularly harm its interests such as Murtaza Solangi, Cyril Almeida, Sherry Rahman, Najam Sethi, Wattoo etc.

The central point of contention was that the last PPP government was solely responsible for not solving Benazir’s murder. There was little to No mention of not one but two independent investigations ordered by Zardari when he and the PPP approached both the Scotland Yard and the United Nations.

When Benazir was killed, the head of State was Musharaf and the Judiciary was under the ISI and Nawaz Sharif. The first priority was to ensure a transition to Democracy; precisely so that Musharaf could be held accountable at the right instance. Contrary to the delusions of Pakistan’s chattering classes, this was not the Deep South of the Jim Crow era or more correctly, those responsible for Benazir’s murder control the Pakistani State and include thousands of Saudi-sponsored Deobandi terrorists.

The PPP is unfairly blamed for providing a State exit to the former president Musharaf. What else were they supposed to do within the Law?? Of course, no one is willing to state the fact than General Musharaf was actually provided amnesty by the “anti establishment” Nawaz Sharif!

There are dual standards here that only damage those who use them. For instance, even in death, Benazir is not spared the abuse, mockery and slander by Pakistan’s chattering classes. This is the class of people who have blind faith in the gossip peddled in elite drawing rooms and by the dishonest shills of the Pakistani media.

So those who blame Asif Zardari for “not doing enough” and utilise the most absurd conspiracy theories in the process are exposed when they are silent or supportive of Musharaf and the Taliban. None of these talking heads have pointed out the simple fact that during his presidency, Zardari could not even determine samosa prices – let alone determine the outcome of the most delicate investigation in the history of Pakistan.