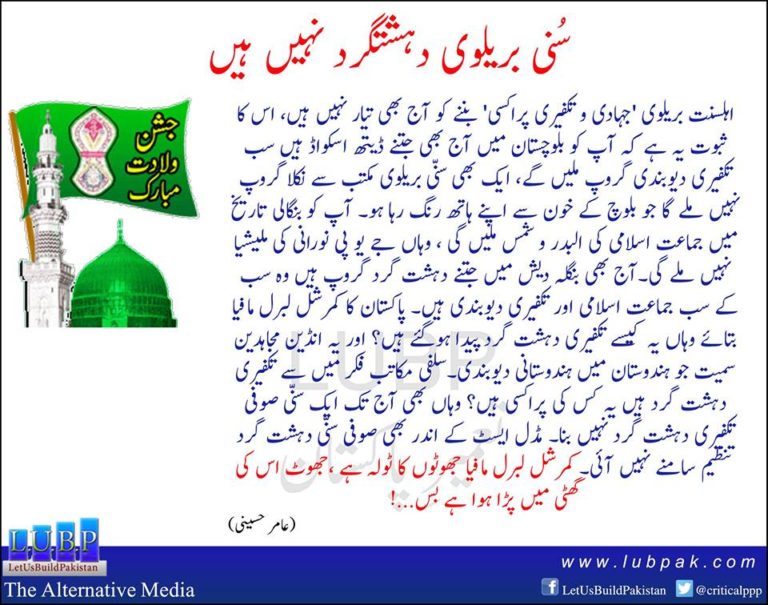 Some from left to liberal turned writers in Pakistan have contract killers of the history. They always express biased views about Sunni Barelvis,whenever they got chance.They are doing this dirty job without fear and shame. Recently such ideological former leftists but today’s liberal got chance to spread their fallacies about Sunni Barelvis due to uprising of Threek Labaik Ya Rasool Allah- TYYR,a minority section among Sunni Barelvis,which doesn’t represent majority of Sunni barelvis. Such biased and cheater contract killers of history know well, their readers are those in majority, who have very poor knowledge of history and geography, so they do this daringly.

Such contract killer of history is Nadeem Farooq Paracha,who writes a feature for Sunday edition of daily Dawn titled with ‘Smoke Corner’. Recently he writes a feature titled under headline: Theological Crossfire.
Summary of this biased article, we can determine by sub-headline: Smokers’ corner: Barelvi politics no longer supports Jinnah’s vision of Pakistan.

Nadeem F.Paracha mentioned here support of Sunni barelvis for Jinnah and All India Muslim League’s Movement for Pakistan under banner of All India Sunni Conference. But he did not mentioned vision of main leaders of Sunni Barelvis present there in All India Sunni Conference-AISC. Intellecual honesty was that,he would mention declaration passed in the said conference,which clearly tells us about understanding of Sunni Barelvi clerics and Pirs of AISC about Jinnah’s vision of Pakistan.

Nadeem F.Paracha knows well that readers of his distorted writings did not know about manifesto of All India Sunni Conference and he knows also ignorance of his majority readers about background of formation of AISC. So he make sophistry easily about vision of Sunni Barelvi clergy and Pirs and then wrongly tells us that leaders of AISC‘s vision had very similar which our liberals in majority calls vision of Jinnah about Pakistan.

Background of AISC:
A number of Sunni ulema at the meeting at Jami’ah Na’imia, Moradabad on March 16–19, 1925 set up an organization by the name of Jamiyyat-e-Aliyah-al Markaziah commonly known as All India Sunni Conference (AISC).

Aims and mission of AISC were:

**** Counter of Shuddhi Movement (Purifying/Cleansing Movement)
**** Combating Sangathan Organization
**** To combat conspiracy of banning Azan in the name of Hundu-Muslim dispute
*** Against demolition of Mosque
***Against Blasphemous movement against Quran and Prophet صلی اللہ علیہ وآلہ وسلم
*** Against bloodshed of poor Muslim Community
*** Against Ghanaian Mirage of freedom in the name of Sawraj
*** Against main decisive role of Gandhi in Caliphate Movement
*** To aware Muslim about destructive and decaying nature of Non-Cooperation Movement and Migartion Movement
*** Against Politics of Hindu-Muslim assimilation to curb their religious and national identity
***Against enmity of Muslim sub-organizations of All India Congress
(https://ia902302.us.archive.org/…/Khutbat-All-India-Sunni-C…)

So we can say that vision of Sunni Barelvi clergy and Pirs of All India Sunni Conference was never at all Secular,liberal,inclusive for all vision on question of Muslim Nationality and Muslim Nationhood. But keep in mind our so called secular nationalist Deobandis of JUH or MAIH were also not secular nationalist when they would deal with Shia,Sunni Barelvis and Ahmadis.Main attack was on their sect identity in campaign(run by Darl-uloom Deoband,Hussain Ahmad madani, Attaullah bukhari and others) against All India Muslim Leage and its leadership. They call Jinaah Kafir-i-Azam ( biggest apostate) due to his Shiite identity, attacked on Sir Zafarrulah while targeting his Ahmadi Identity.

But our fake intellectual Nadeem F.Paracha neither revealed existence of theological vision on Question of Muslim Nationhood and state of Sunni Barelvi clergy and Pirs of AISC,nor he pointed out sectarian and religious hatred campaign of Congressite Deobandi clergy of JUH and MAIH.

Why he obfuscated but totally blacked out manifesto, mission statement of AISC? Because he falsely constructed premises about Sunni Barelvis Politics in British era on communal question. He himself supposes that Sunni Barelvi clergy and Pirs supported Mr.Jinnah because his alleged secular-liberal inclusive for all vision of Muslim nationhood and non-theocratic vision of state. Historical facts and evidences doesn’t support his claim. Even he cannot present a single statement of any Sunni Barelvi cleric from Maulana Hamid Badauni to Maulana Shah Ahmad Naurani,which supports his claim.

Clergy and Pirs of Sunni Barelvis supported Mr.Jinnah and his demand for separate country for Muslims because according to their theocratic politico-religious ideas not for those ideas which liberals attributes to Jinnah.

Sunni Barelvi clergy and Pirs always think that Jinnah’s dream was to set up an Islamic state based on Islamic constitution. They still have same views. You can say that there are some difference among them on nature of that Islamic state. Majority clerics and Pirs are more inclusive in orbit of theocratic stae ideology and some are more rigid like Khadim Rizvi and Sarwat Qadri of TLYR and Sunni Tehreek respectively.

But when they deal with Deobandi Politics then they first try to paint role of Deobandi organization JUH as Secular nationalist party and never talk about its sectarian and religious hatred based role before partition and post partition era under banner of JUI. They try to equate organized Takfiri Terrorist fascism emerged from Deobandism with extremist minority trend in Sunni Barelvi which never remained involved in mass murders of Shia, Ahmadis and other communities. In other word they try to equate single individual act or terrorism made by Mumtaz Qadri to those who murdered 70000 Pakistani people after 9/11.

In the said article Nadeem.F Paracha did not mention Tahirulqadri and his organizational network,which every body knows that is working ideologically and practically against Takfirism and Jihadism and even Tahirulqadri condemned every time extremist and narrow minded and extremist beahviours and trends exiting in Sunni Barelvi clergy. In fact we can say that Qatari’s intellectual and practical efforts are first of all against those Sunni Barelvi clergy and Pirs who spread hate and narrow-mindedness among Sufi Sunnis.

Nadeem.F Paracha never will tell his readers about life membership of late Baenazir Bhutto Shaheed of Tehreek-i-Minhaj-ul-Quran International. Because SMBB’s membership proves that She had though religious ideas of Tahirulqadri were not based on extremism excluding majority of Muslims from orbit of Islam.