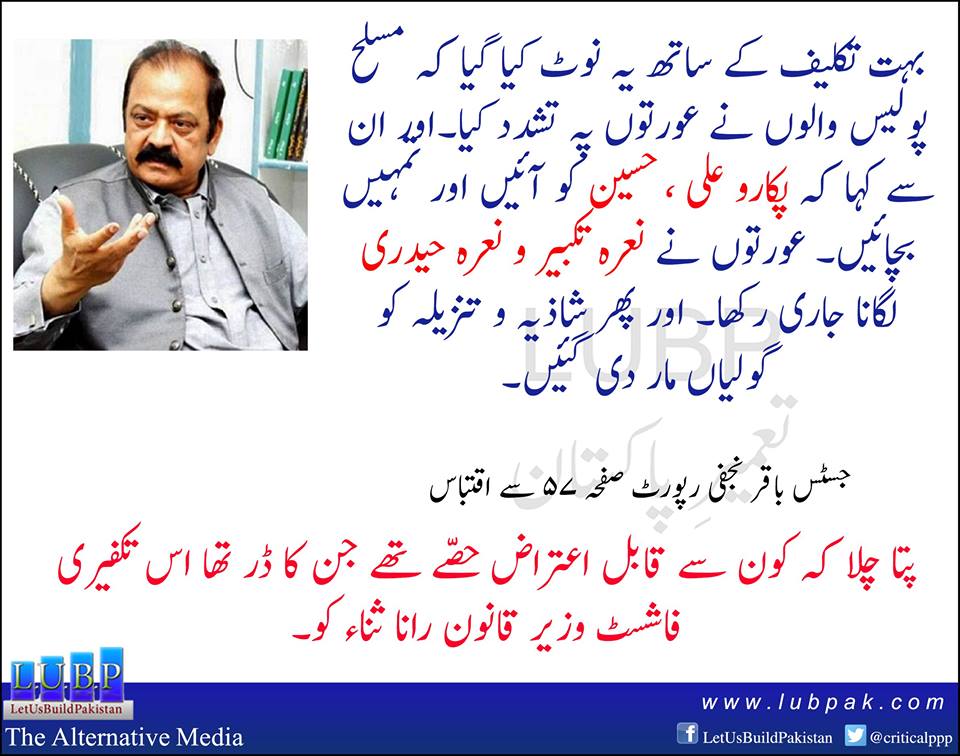 In the recently emerged Justice Baqar Najafi report on the Model Town massacre on the orders of Shahbaz Sharif, the sectarian bigotry of the murderers has been highlighted. The police who had been directed by Rana Sanaullah to use excessive force were engaging in typical Deobandi Salafi obscurantism. As they shot dead unarmed women (in the manner of Ummavi/Ummayad traditions), they taunted the victim’s with:

“Ask your (Hazrat) Ali and (Imam) Hussain to save you”!

Some of our friends find this part of the Justice Najafi Model Town report incredulous. Don’t.

When Benazir Bhutto wore the “Ya Ali Madad” Sufi amulet, it was educated and upper middle class urbanised Pakistanis who spewed sectarian invective against her. When Benazir was assassinated, it was not just the Lal Masjid terrorists who celebrated the death of this brave woman leader. It was also sections of Pakistan’s educated Upper-Middle class, urbanised and Deobandised civil society that also (mutedly) cheered her murder.

The British supported and sponsored Calvinist obscurantism movements in Hejaz (Wahhabism) and South Asia that buttressed political Islam in the 20th and 21st century. These strains are responsible for the Takfeer-inspired violence that have claimed the lives of 70,000 Pakistanis. And it was these Calvinist strains that motivated Shahbaz Sharifs murder squads to utter their vicious sectarian bigotry as they shot unarmed women at point blank range.