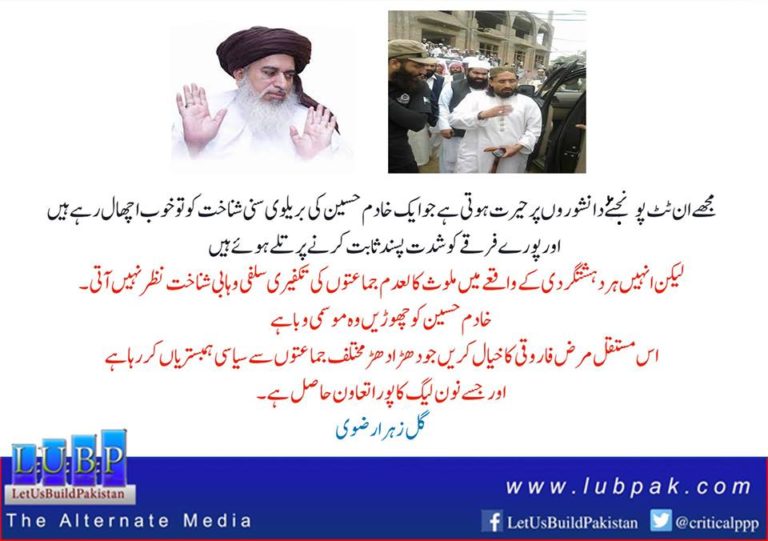 Before you read the rest of this article let me show you how Taliban military establishment works and how shameless creatures like Nusrat Javed are afraid of even remotely referring to Takfiri extremists.

Yesterday when I watched this show at 9th minute, Nusrat Javed talked about without even naming or identifying Sipah-e-Sahaba in Jhang and claimed that Peer Sialvi is becoming same. I have full paragraph on this little later. But look how Dawn News removed that from their video. If you want to watch the censored part watch here.

Nusrat Javed Abbasi is one of the key non-state actor of Taliban military establishment. Over the years he has establishment himself at the level of Ansar Abbasi, Imtiaz Alam and Orya Maqbool Jan. Taliban military establishment of Pakistan creates these touts in print and now electronic media (and now even in social media), who have to maintain a certain image in the eyes of their fan club according to the ideology they adhere too. For example Ansar Abbasi regardless of his political opinion, association with Geo or his social interactions, in his primarily Deobandi/Wahabi Islamists fan club he ensure that he keeps on raising issues like “Interest (Sood)”, “Fahashi (Vulgarity)” and “Islamic punishments”.

Same goes with Orya Maqbool Jaan who fan club is primarily non-deobandi/wahabi right wing population.
Imtiaz Alam and Nusrat Javed are those ISI touts who have been recruited during Pervez Musharraf’s regime and play the same role as Ansar Abbasi and Orya Maqbool does. In this article I will talk about one of successful strategy both of these groups have used over the years to deceive people of Pakistan. Nusrat Javed is one of the best practitioner of this strategy and in this article, I will prove from his recent talk show.

My readers know that I have described in detail the doctrine-of-best-deception which is used by the takfiri Islamist scholars to deceive muslims and non-muslims alike.

Let me set the context of this talkshow, Justice Ali Baqar Najfi is a sitting judge of Lahore High Court, whose report on Model Town incident was released recently. On the day this talkshow was aired all the electronic media anchors were discussing this report in detail. Let us keep in mind that Model Town incident (Saniha – I will explain the word Saniha shortly), was about the killing of 10 (important to note this number 10 as calling it 14 could nullify the whole incident) people by opening direct fire on them by the Lahore police.

2:20: Nusrat Javed Abbasi opens the talk show in a suspenseful manner, talking about the announcement from Donald Trum to declare Jerusalem as the capital of Israel. One must remember that Nusrat Javed portrays himself as the “liberal” of old days when cause of Palestine was considered sacred by the liberals. However after the demise of USSR, and insurgence of Jehadists in Palestine, the sanctity of Palestine cause was compromised in the eyes of desi liberals. Over the years on the so-called Youm-ul-Quds when Jamat-e-Islami and other takfiri jehadi organisations demonstrate in cities of Pakistan, Nusrat Javed has been highly critical and in usual manner mocked those molvis. But listen again how Nusrat Javed in a very serious tone declares the announcement that has not even yet happened a “Saniha”, this wording is important to understand something which I call acute lack of sense of proportion syndrome. Nusrat Javed has deliberately used this word for a non-event in order to ensure that this word can not be used for Model Town “Incident”.

3:40: This one is very important, the change of tone, very carefully selected sentences. Let me give an example, Justice Shaukat Aziz of Islamabad High Court, is a known takfiri judge who had a track record of supporting terrorists including Molvi Abdul Aziz of Laal Masjid. Now listen to this

Compare how respectfully Nusrat Javed utters the name of that Takfiri judge and ensure that he leaves a certain good image that judge in the minds of his audience despite perfectly knowing the history of Shaukat Aziz. On the other hand see how disrespectfully he talks about “Najafi” , Najafi commission. I will tell you that these are very carefully selected words, he deliberately avoids mentioning that Justice Ali Baqar Najafi is a sitting judge of Lahore High Court. (Keep that in mind I will show you why he did so).

4:10: Those who have read the report know that Justice Ali Baqar Najafi has raised his objection on the one line terms of reference of the judicial commission. He also ensured that he remains within the terms of reference of the commission. Nusrat Javed deliberately tries to portray that the Terms of Reference were only to give the government “recommendations” to “avoid such incidents”, which is outright lie. He also tries to suggest that Justice Baqar Najafi instead of giving “good recommendations”, wrote a “lambi choori” report without giving any recommendation.

Nusrat Javed is such shameless creature that he would not tell the listeners that the “recommendation” given by Justice Baqar Najafi is not because government asked for that, he gave his recommendation because due to non cooperation of Lahore Police Officers and because Punjab government has not given him the required authority to probe & investigate, he could not fix the responsibility to a single person. Which led to his recommendation that a law could ensure that the order of opening fire rests with a single person so that in such cases responsibility can be easily fixed.

4:40: The doctrine of best deception in practice can be seen here. Remember Justice Ali Baqar Najafi recommendation has nothing to do with the Magistracy law of the British time, the recommendation was only limited to the power given to Magistrate to pass the order of opening fire so that such responsibility lies on one person. Nusrat Javed cunningly brings Musharraf into this as well, this is very important just like Ansar Abbasi will bring Hazrat Omer (R.A) or Abu Bakar Siddiqui (R.A), in his arguments to give himself credibility in the eyes of his religious minded fan club, Nusrat Javed ensures bringing in Musharraf (and rarely General Zia) in his argument in order to establish his democratic credentials and gain credibility in the eyes of urban liberal fan club.

And also notice how he twisted the issue to portray as if it was some procession or protest which police could not manage properly. He did not mention that it has nothing to do with crowd management, police was not there to control the crowd it was there to remove the obstacles at 3am in the night.

6:25: This is they key to understand the relationship between Ansar Abbasi clan and Nusrat Javed clan. You will find that both of these groups are fed by the same General Goebbels. This sentence “iski qanooni aitbar se koi value nahin hai”, (this report has NO legal value). It is not just the words used in this sentence but the delivery of this sentence, pitch of the voice on word “Koi” and gestures of hands etc, you can actually hear this sentence from every single ISI tout and ISI politician not just from Rana Sanaullah, but Munib Munna to Kamran Khan and you will notice how well trained they are.

6:40: Let me remind you again that report is about Model Town incident (don’t use the word Saniha which is reserved for Jerusalem as capital of Israel), in which 10 (again don’t forget it is ONLY 10) people were killed by the direct fire from Lahore Police. You would notice that Nusrat Javed and I can assure that if you read or hear any other ISI tout talking about Model Town “incident” you will never hear that there any people killed in that incident. It will appear to you from their talk it was some minor incident in which Police did baton charge and those victims have raised hue and cry.

Also notice how he utters the word “Qadri and his cousins”, remember the tone and manner this will be important to compare it later on.

7:00 – Remember military generals don’t pay to these touts. Military establishment does not have enough money to pay anyone, they beg for themselves from US, they snatch bread from poor. So the pay comes from bloody civilians. And here come Sharif brothers. It is not pain of Jamhooriat, military establishment was doing much worse against Zardari, but at that time these liberal democrats had no pain while in case of Nawaz Sharif it is the labour pain for them.

And see how he mocks Qadri, let me remind you that once in his life he tried to mock Molvi Tariq Jameel in the same manner and after only one night (I don’t know what Tariq Jameel’s goons did to him … but for those who know Nusrat Javed favourite gali (abusive word) will know what they did to him). He has never said a bad word about Tariq Jameel after that.

9:00 – This is the most glaring one. First let me tell you that Nusrat Javed here could have taken the name of Ludhuanvi and Sipah-e-Sehaba (& their “core constituency” Deobandi/Wahabi), but he CAN NOT take their name. He would not even dare say anything about them, he would immediately refer to Afghan Jihad and then quickly switch to “actual message”. Let me talk about the “actual message”, in the past few months a consistent mantra (in fact a narrative, favourite word of our ISI touts). The narrative they are building is that Bralevi extremism is on the rise and it is dangerous as other terrorism (please note they never utter word deobandi).

I would write a separate article on this narrative, but for now let me tell you that this narrative is out of frustration. Please note that Pakistan military establishment has been trying hard over the last 3 decades to recruit extremists from Bralevi and Shia sects. They have used every trick in their bag, they have tried Kashmir Jihad, they have tried bombing them so that they can get arms in anger, they have used target killing. But it is not a surprise that Bralevi and Shia sects have not taken arms it is about ideology. The ideology that differs from Deobandi/Wahabi ideology. And after all the failures they had they have now in frustration tried to create a facade to show the people that Bralevis are also extremists. The issue of Khatam-e-Nubbawat was carefully planned to create that facade. And people like Nusrat Javed with the help of General Goebbels doing their best to spread this narrative.