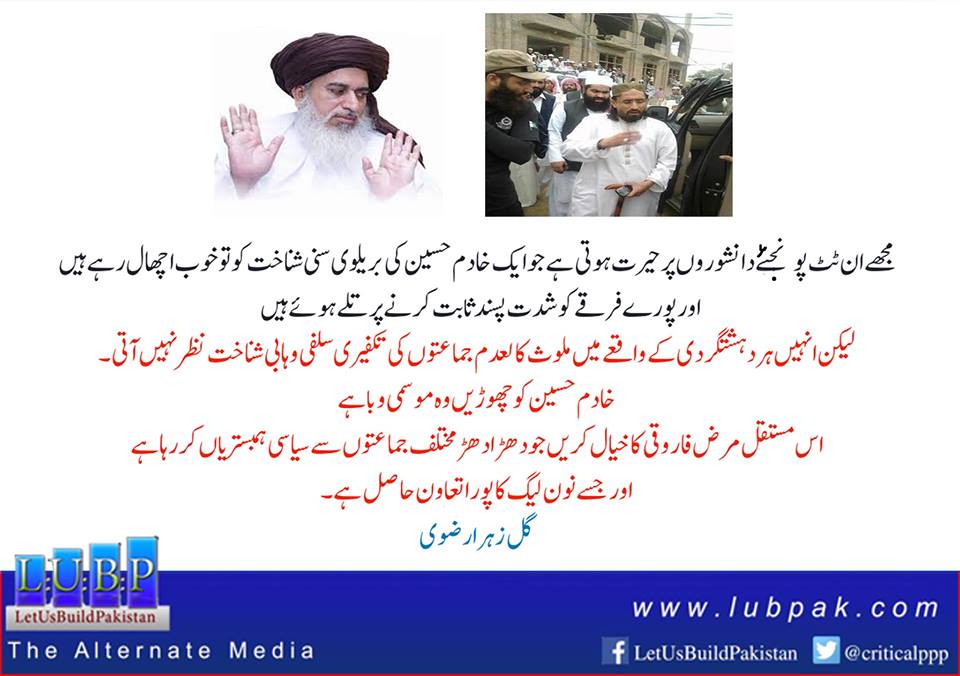 For 40 years, and perhaps to a lessor extant, maybe 70 years, the State has favoured Deobandis. Jinnah’ official funeral in 1948 was handed over to a typically anti-Shia Deobandi Mullah, Usmani. Jinnah was not allowed his official funeral rights as per his declared Shia Isnashari beliefs (the document is freely available online).

However, since General Zia ul Haq took over in 1977, he misused the State to promote Deobandi Takfeerism. When the Saudis and the US stepped in, the State patronage for Deobandis went into overdrive.

For decades, Sunni Barelvi leaders sacrificed their best to take on the Deobandi terrorist takeover of Sunni mosques.

Who can forget Saleem Qadri’s assassination in 2001 by Sipah Sahaba/Jaish terrorists. Or the wipeout of Sunni Barelvi leadership in the 2006 Eid Milad Massacre in Nishtar Park. Or the suicide attack on Mufti Naeemi in 2009-10. Or the massacre and wounding of 100+ anti Taliban Sunni activists of PAT by Shahbaz Sharif/Nawaz Sharif in 2014 in Model Town.

The problem lies with the prevailing narratives being peddled by Pakistan’s commercial liberal Mafia.
For these dishonest hypocrites, 70,000 Pakistanis from all faiths being massacred was not worthy of mention.

For them, morons and thugs like Khadim etc who have stepped into the Sunni leadership vacuum serve an important purpose. They provide a cover to right wing plutocrats like Nawaz Sharif and they also provide a deflection away from the far more dangerous Deobandis.

Few have mentioned how Khadim Rizvi, Afzal Qadri were being used by Nawaz/Shahbaz in their hate campaign against Taseer in 2010-11 – a campaign in which Tahir ul Qadri and Hamid Saeed Kazmi did not take a part in.

And is it any surprise that Deos from JUI and JI are supporting Khadim and Mumtaz Qadri types.