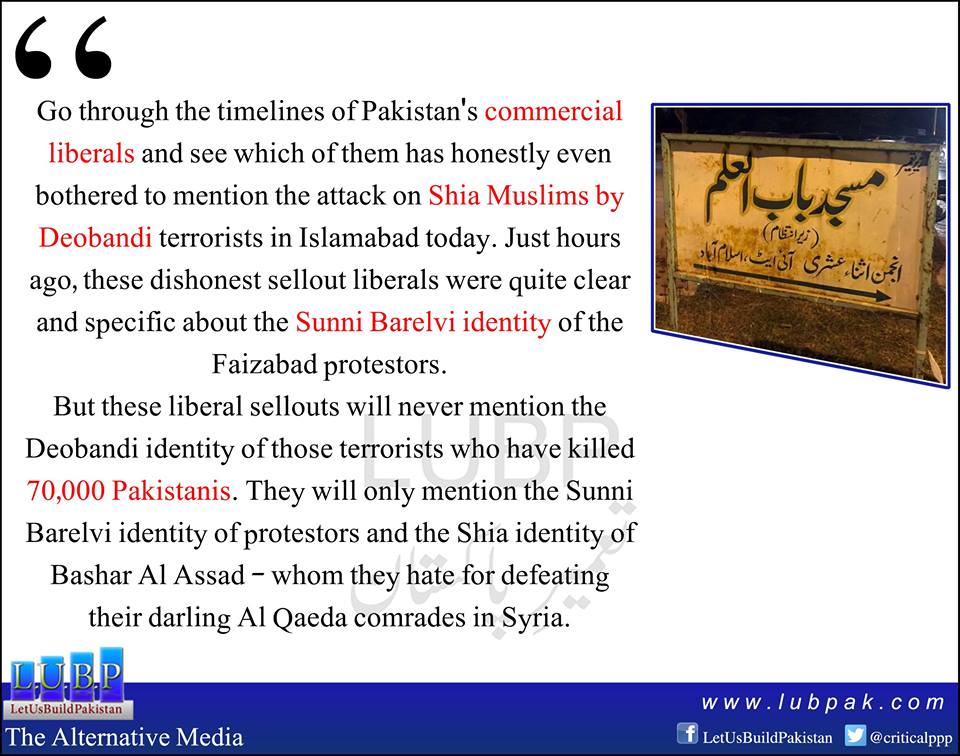 Some people, often sycophants and opportunists, want to absolve this commercial liberal Mafia of their harmful role in misinforming the public.

This commercial liberal Mafia has no roots in the masses of Pakistan and cater mostly to upper-middle classes. Since they dominate (or used to before LUBP) the English press, they misrepresent and misinform about Pakistan to the world as well.

For instance, while they were specific about the Sunni Barelvi identity of the abusive thug Khadim Rizvi and and his protestors, they have been lying about and concealing the identity of Deobandi terrorists who have murdered 70,000 Pakistanis. Instead, they typically blame the Shia victims of violence and/or obfuscate on this issue as well as on other issues.

Obviously, the commercial liberal Mafia did not create a nuisance, confront the police or obstruct public thoroughfares in Faizabad. Their contribution to the current mess is much more dirty and insidious.

For decades, they collaborated with Deobandi and Salafi hatemongers and clerics like Tahir Ashrafi, Ghamdi and Mufti Mahmood. They completely obfuscated and misrepresented decades of Sunni Barelvi resistance to Deobandi fascism. This resistance has obliterated the moderate Barelvi leadership who have been murdered by Deobandi terrorists.

With their intellectual dishonesty, opportunism and hypocrisy, this commercial liberal Mafia collaborated with the establishment and their right wing spawn (like Nawaz Sharif) to marginalise and murder the Sunni Barelvi moderates. This has directly lead to the rise of abusive thugs like Khadim Rizvi who are telling the Sunni majority that the only way to get counted in Pakistan is to emulate the hate and fascist tactics of the Takfeeri Deobandis.

In 2013, Deobandi terrorists attacked their own hate mosque on Ashura. The Deobandi leadership of Pakistan then joined these terrorists to falsely blame Shia Muslims. Pakistan’s commercial liberal Mafia backed the lies of the Deobandis and justified the violence and pogroms faced by Shia Muslims all over Pakistan. Yesterday’s attack on the an Islamabad Imambargah is a continuation of that violence and destruction unleashed by Takfiri Deobandis and supported by the Commercial liberal mafia.