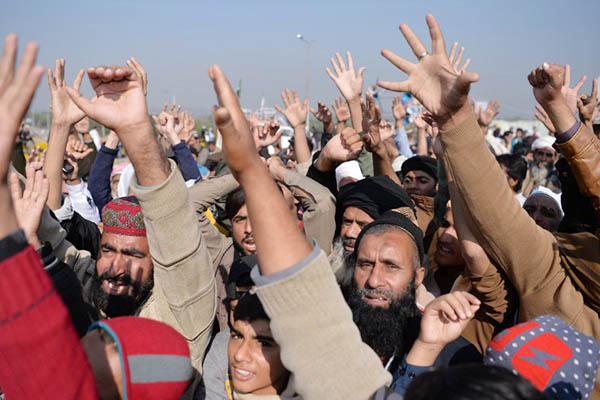 These are two must watch programs from the team of ‘Zara hut kay’ but before I discuss the content of these two programs. Let me set the context and give background of the hosts and the events discussed in these.

Pakistan’s liberal section consists of several categories of liberals, a very apt name given to one group of these liberals is “commercial liberals”. Even this category can be subdivided into multiple subcategories from the careerist hopefuls to the internationally recognised professional liberals. One of these subcategories is the one which consists of “highly respectable anchor-journalist-cum-intellectuals”. These people are usually associated with international media outlets like BBC/VOA/CNN. Unlike our local liberals their jobs and income is not dependent on the local resources.

To put it more bluntly these people do not rely on income as an ISI tout (although they don’t refuse any extra income if ISI pays them). Instead their funds comer from international NGOs, think tanks, Saudi Arabia & even UN/US. This gives them a lot of liberty and freedom to speak on certain taboo topics. The team of Zara hut Kay consists of such intellectuals.

Let me also set the context of these two programs. In order to understand the contents of these programs let me outline some basic axioms of doctrine of best deception.

a) One of the key objective of doctrine-of-best-deception is to create a smoke screen such that not only the common people amongst Muslims but the non-muslims living in West take extremism as a necessary evil of religion. Which means that the extremism stems from the religious doctrine shared by all the sects particularly in case of Islam.

b) As a consequence of the above, there are two very important strategies, number one when discussing the terrorism by Taliban & other takfiri groups never identify them with their sects. They are Muslims who have been deluded by the religious doctrine shared by all the Muslim sects.

c) Number 2, when discussing religious extremism by non-takfiri sects like Bralevis, & Shia, it is important to identify their sects by name. This makes sure that people understand that it is not just a specific sect in Islam or a certain religious doctrine but the religion as a whole that is the root of extremism.

Keeping these axioms in mind let us discuss the two talk shows.

First show is about the conclusion of Faizabad Dharna. It is not just funny to watch this talk show, it shows the mind of our liberals how they twist the facts and spin the stories even if it looks completely absurd.

I will quote few example here.

The reporter Muhammad Asghar deliberately confuses the unwillingness of police with demoralisation which are two completely opposite effects. He mentions why the police was unwilling to use the force in view of Model Town incident but deliberately ignore to tell what the model town incident was. Remember in Model Town police killed 14 unarmed people including women by opening direct fire on them. The police in Rawalpindi was “unwilling” to do the same, and they refused their seniors to accept the orders of opening fire on the civilians. Although Muhammad Asghar mentions twice why police was unwilling to open fire yet the group insists that the protestors were highly trained equipped with sophisticated tear gas shells and masks. They quote unnamed police officers.

Check how this Einstein wonders that he “thought” that protestors snatched the tear gas shells from police (which btw may really be the truth). Look at the expression from another Einstein that how terrifying is that these protestors had those teargas shells. Keep this in mind when comparing it with the second talk show in which they cursorily talk about the lethal weapons of Taliban.

Listen to this how Muhammad Asghar dramatised by telling that those protestors wanted to lynch these policemen and they forgave them only when these policemen begged them to leave them. And then he tells how these protestors beat these policemen by “plastic wires”. Do keep this dramatisation in mind when you watch the second show. We are comparing this with the people who would play football with the heads.

Now this one is very interesting one of the Einstein relates the supply of food with the supply of “teargas shells”. They try to refer to intelligence report to spin that there may be some other group (army) providing the food to these protestors. Even though the reporter kept insisting that it was common people who were sending food.

This one is the most important one, comparing TTP, Taliban terrorist with these people is the key objective of the doctrine of best deception. Just see how Naik Muhammad , Ahsanullah Ahsan and others are compared with Khadim Rizvi and the protestors. I call it acute lack of sense proportion syndrome.

This talk show discusses only for 20 minutes confessions of Ahsanullah Ahsan. They do not want to spend more then 20 minutes on this terrorist although they spend two completed programs on Faizabad Dharna. First thing you will notice is how serious they sound while discussing this. No cheap excitement, very carefully selected words. No shouting, no cross talking and very respectful language. Just watch the tone of this program.

How respectfully they utter the name of Mullah Fazlullah, Khalid Khurasani. This is not just funny. Compare this with the previous video how they ridicule Khadim Rizvi and other Peers.

Remember Wasatullah Khan tries to be sarcastic, but in this case this is not sarcasm, this is a very deliberate attempt and carefully selected words. Particularly how he says “innocent Ahsanullah Ahsan”. And how Zarar Khuro covers that up by pointing that it is sarcasm.

This one is the key, just see how Wasatullah Khan brings the question of “rule of law” , compare this with his insistence on opening fire against those protestors in Faizabad and his casual reference to Model Town incident. This is the ugliest face of these liberals. I keep insisting that they are hand-in-gloves with takfiri terrorists. It is hard to find a difference between Ahsanullah and Wasatullah.

Just see how Zarar Khuro covers up the smiling face of Ahsanullah Ahsan. He also tries to reassure people that Ahsanullah may be given death sentence. But the fact is they were just lame assurances.

This is the key, “its a “shadow war” , this is unfortunate.” as if assuring people that there is nothing wrong with forgiving this terrorist.

I hope these two programs will make you understand how our commercial liberal mafia provides the cover and facade for the takfiri extremists.