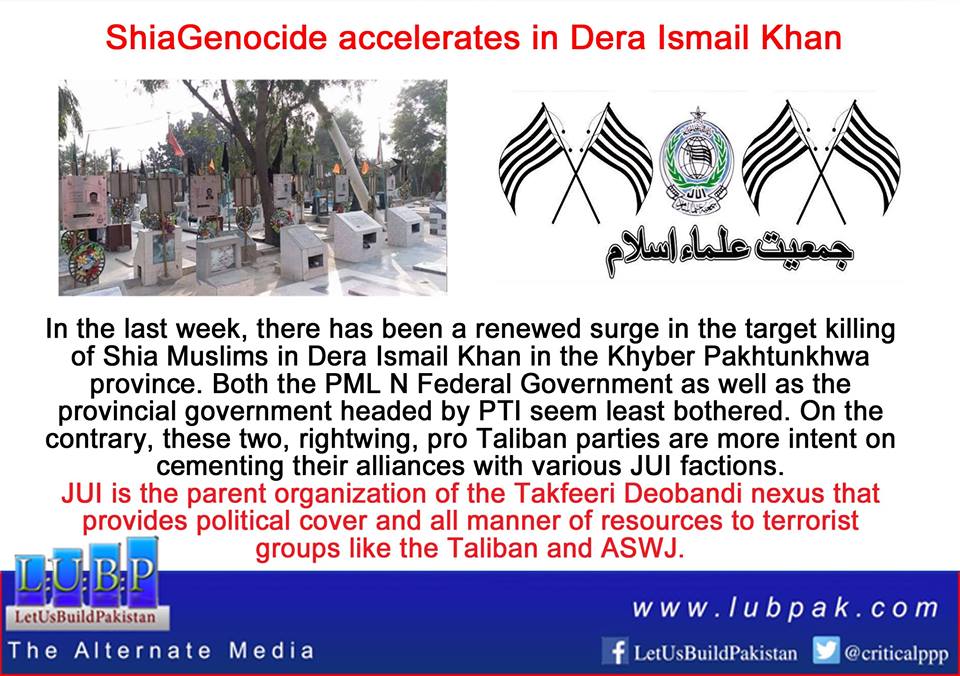 In the last week, there has been a renewed surge in the target killing of Shia Muslims in Dera Ismail Khan in the Khyber Pakhtunkhwa province. Both the PML N Federal Government as well as the provincial government headed by PTI seem least bothered. On the contrary, these two, rightwing, pro Taliban parties are more intent on cementing their alliances with various JUI factions. JUI is the parent organization of the Takfeeri Deobandi nexus that provides political cover and all manner of resources to terrorist groups like the Taliban and ASWJ.

The target killing of Shia professionals, poets and civilians has gone on for decades in Pakistan. Several doctors, lawyers, poets, elegy writers and reciters, professors, laborers and business owners have been callously murdered in DI Khan, just as they have faced a similar situation all over Pakistan. Their only fault is that they belong to the Shia Muslim school of thought.

The liberal intelligentsia in Pakistan has also contributed to this state of affairs. Out of their sectarian tribal sympathies and their general tendency to obfuscate those issues where financial opportunities are lacking, the liberal elites of Pakistan have purposely either ignored Shia Genocide or misrepresented it deliberately in false binary terms.

The Afghan “Jihad” of the 1980’s that was lead by the ISI, USA and Saudi Arabia had a profoundly destructive effect on D I Khan as it did on the rest of Pakistan. Dera Ismail Khan has a large population of Seraiki speakers as well as those who belong to Shia and Sunni Sufi sects. The social fabric of D I Khan represented pluralism in culture, linguistics and religious thought. This sort of pluralism is anathema to ISI-Saudi-US backed Takfeeri Deobandi militants that are churned and facilitated by the post 1977 political order in Pakistan.

The Seriaki and Pashtun Shia communities of D I Khan has been decimated to the extant that after 2009 (insert image provided here), the list of the victims of Shia genocide has not been updated.

The recent murder of Sabir Hussain, an intellectual who composed the rich traditional genre of Nohas has been a devastating loss to both his family and his fans across the globe. His murder by the ISIS-affiliated Takfeeri terrorists of the Sipah Sahaba Taliban (aka ASWJ-LeJ) creates a further gap in the intellectual tradition of Shia gnosis.

The same Takfeeri terrorists also killed a ranking Pakistani military officer just yesterday. If only Pakistan’s State, its fickle establishment spawned political leaders like Nawaz Sharif and Imran Khan and its jejune liberals had understood the gravity of the situation instead of supporting it across many decades, this would not have happened.

Shia Muslims in Pakistan and their defiant practice of Azadari has been the first line of defense against Takfeeri terrorists. Azadari is what threatens their Takfeeri Salafi and Deobandi ideology. Elitest and vacuous events like fashion shows, (il)Literacy festivals and pompous Beinnales do not represent any resistance to this Takfeeri menace. On the contrary, these NGO events provide escape and seclusion to Pakistan’s pseudo liberal elites. The real resistance to Takfeerism and bigotry is the blood of the martyred poet Sabir Hussain.