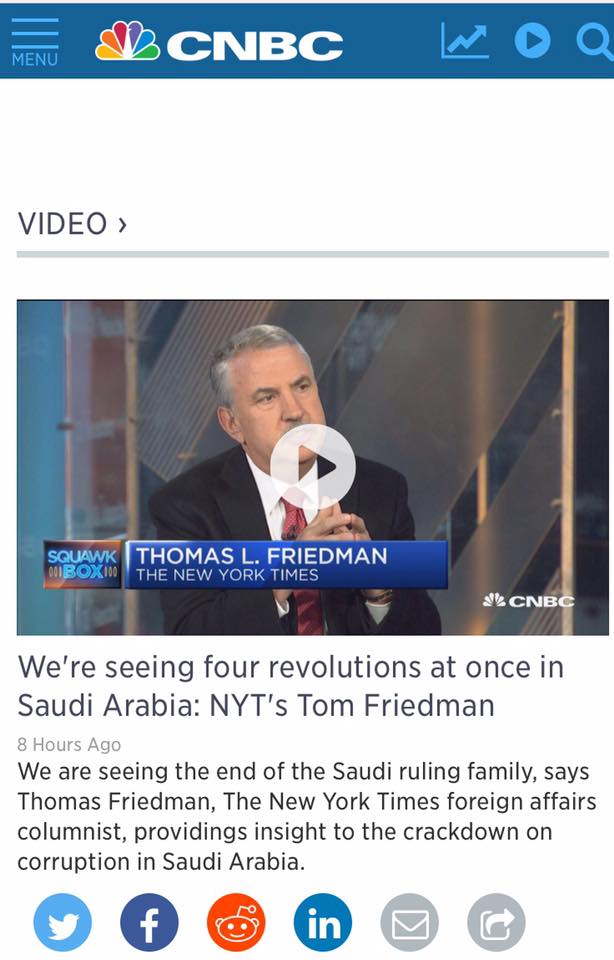 There is no difference between establishment Democrats and Republicans in sucking up to Saudi despots. Before watching Thomas Friedman sucking up to the palace coup of Ibne Salman, make sure you have a puke bucket ready.

– No mention of Saudi Arabia’s horrific anti-humanitarian aggression against Yemen that is actively supported by the US and U.K.

The rest of the clip is the typical apologist nonsense that is being peddled by #NYT and #WaPo via their sellout propagandists such as #ThomasFriedman and #DavidIgnatius. Ignatius literally acts as the mouthpiece of UAE embassador Otaibi who has been lobbying for IS for the last two years at least.

IS is now being whitewashed as a “reformer” who is leading four “revolutions” on the ideological, political, social and financial!

Yep, this is how Friedman describes IS’s failed and costly aggression against Yemen and his active role in fomenting sectarian hatred against Christians, Shias and Non-Wahhabi Sunnis. This is how Friedman performs as a pathetic apologist for Saudi complicity in backing and sponsoring ISIS and Al Qaeda against Syria.

Like his fellow liberals, Friedman mostly dodges the central fact that Saudi Arabia STILL shares the same ideology as ISIS and Al Qaeda. He uses typical obfuscations such as “Islamists” to deflect attention away from the specific Wahhabi/Salafi ideology that governs the Saudi ruling monarchy.

In one instance, he dodges this issue by absolving the last few decades of Saudi monarchy with liners like this
“The were not following Wahhabism but actually the only ideology they were aware of was Alzheimers” (paraphrased)

This begs the question then. If the last few decades of Saudi despots were mentally unfit, what does it say about US presidents and SOS’s like Bush, Clinton, Obama, Kerry and Hillary who were so close to them!

Trump is simply a lightening rod and a buffoonish distraction. When it comes to Saudi Arabia, the establishment in the United States speaks with one voice – values and rights be damned.