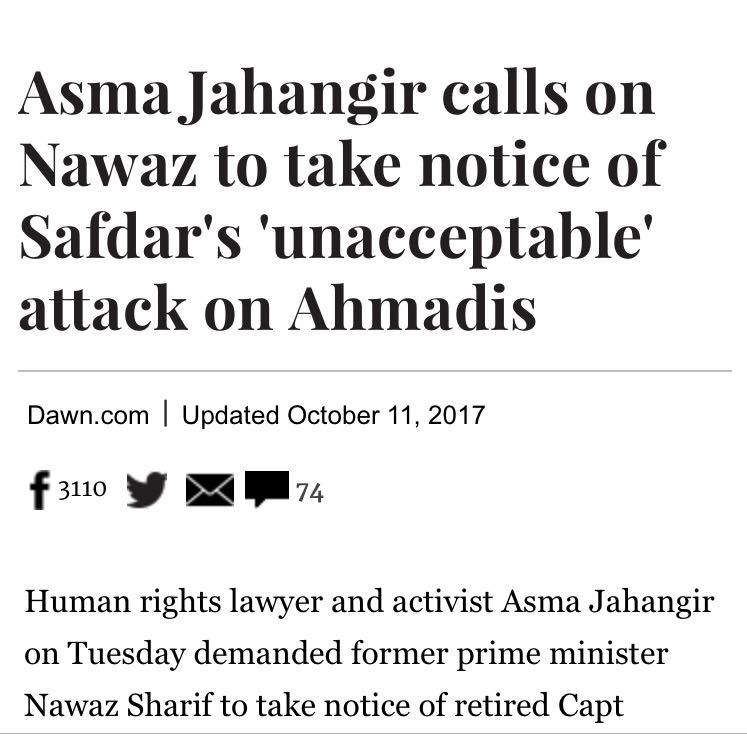 Why is Ms Jehangir asking Nawaz Sharif to just take notice?? Has he been sleeping so far? Isn’t Nawaz Sharif paying for Maryam and Safdar’s BMWs, Mayfair apartments and 5-Star lifestyles from his ill gotten wealth.

This is another pathetic attempt at deflection by Ms Jehangir. If she had any integrity, she would have called out Nawaz Sharif himself.

Captain Safdar is a nobody! He is a Ghar Damad – brought and kept by Nawaz Sharif and derives his power from the Sharif dynasty. The responsibility of this bigotry lies with Nawaz Sharif who enabled such thugs and bigots.

Within hours of Nawaz Sharif’s disqualification for corruption, forgery, money laundering and perjury, Asma Jehangir had issued a dozen tweets, interviews and editorials in his support. When 100+ Pakistanis were massacred in Parachinar by Nawaz Sharif’s ASWJ-LeJ/Taliban allies, it took 6-7 days for Ms Jehangir to issue a single cosmetic tweet.

This “calling out” is not just insufficient; it is an insult to the cause of human rights. Asma still has not bothered to respond to Captain Safdar’s cheerleading for the murderer, Mumtaz Qadri.

Why can’t she and the bunch of pathetic sellouts who follow her blindly not call out the fountainhead of this bigotry, i.e. Nawaz Sharif.

Asma Jehangir, like many of Pakistan’s sellout liberals derive their employment, influence and favours from the Sharifs. In 2010, Shahbaz Sharif publicly claimed solidarity with the ASWJ-LeJ terrorists who massacred 100+ Ahmadis in Lahore. In 2014, Jehangir and other “liberals” not only denied justice to the scores of Dead and maimed PAT workers; they continued to mock them and advocated in favour of the murderers, Nawaz and Shahbaz.

Now these Fake liberals are reading from the same Script: “absolve Nawaz and blame Safdar and allow Nawaz to protect Safdar”.