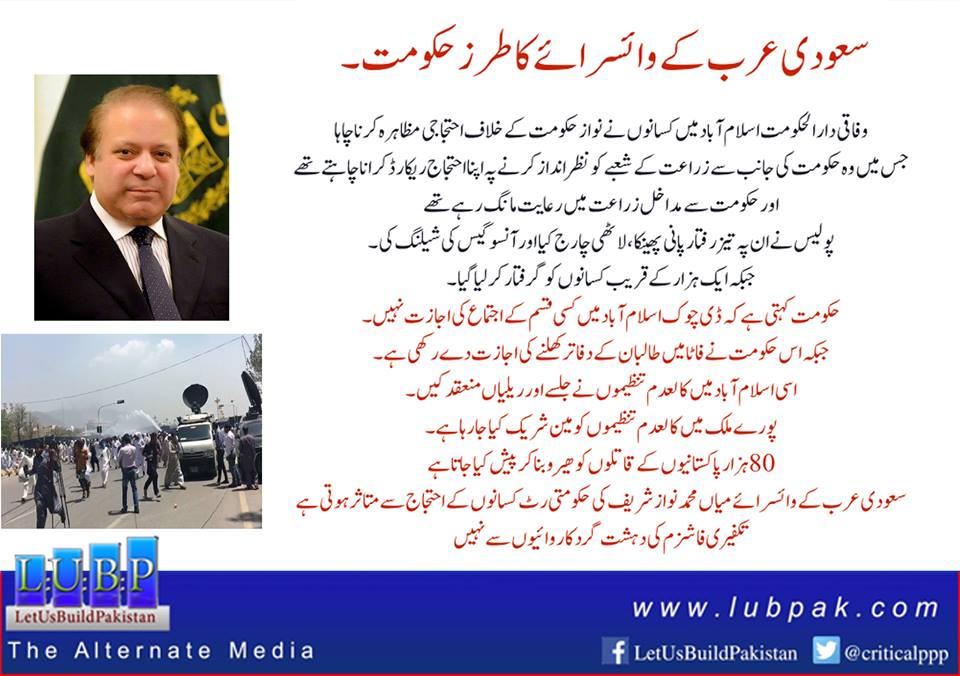 Excerpt: “This is the Fake Liberal Mafia who feel that Democracy in Pakistan originates out of the posterior of contemptuous Saudi despots”

One is quite amused to see the Fake Liberal Mafia come out to protect a corrupt, Saudi stooge Prime Minister Nawaz Sharif. The apologist arguments being peddled by sellouts and hacks like Hamid Mir and Nusrat Javeed can be easily contradicted by facts. The irony is that these same opportunists like Hamid Mir and Nusrat Javeed had an entirely different standard for the previous elected PPP government. During the last tenure, Mir and Javeed exalted the prejudicial statements of compromised judges like PCO Chaudhary. Today, they want us to disregard the verdict of the Supreme Court! What a bunch of hypocrites.

Lets start with Hamid Mir, a vicious Deobandi sectarian who made a career out of eulogising terrorists like the Burqa clad mullahs of the notorious Deobandi Lal Masjid. Hamid Mir went one step further and actually collaborated in the murder of a informant planted in the Taliban for which he never had to face any accountability.

By showcasing the ISI-backed Liars movement, Hamid Mir, like many other sellouts and opportunists, created “capital” with disgraced and compromised judges like PCO Chaudhary and never really had to face any charges for his role in the murder of the informant.

Hamid Mir is peddling the typical lies of the Fake Liberal Mafia. The main theme is to bemoan why Nawaz Sharif has to answer about his corruption, nepotism and dirty money trails to an investigative panel appointed by the Supreme Court! As per our Mafia, this is a first. What Hogwash!!

PPP Prime Ministers have had to face worse. Bhutto was subjected to a sham trail where one of the judges who decided against him later admitted that the Courts engaged in the “Judicial Murder” of the elected and independent prime Minister, ZAB!

His daughter Benazir and her family were constantly dragged through the courts and dismissed on far flimsier charges that those levelled against Nawaz Sharif. Nawaz should know as from 1979-present, he has sat in the laps of many an Army and ISI chief and played a central role in making politically motivated cases. In 1990, Nawaz Sharif even took money from the notorious Osama Bin Laden and collaborated with the ISI to overthrow the elected government of Benazir Bhutto.

The last elected Prime Minister before Nawaz Sharif had to face far worse. Yusuf Raza Gillani appeared before the Supreme Court on multiple occasions and was finally dismissed by the courts for following the Constitution. The Contempt of Court Ordinance that was used to illegally dismiss Gillani was inserted into the Constitution by the dictator General Musharaf!

The same dictator whom these corrupt and compromised judges pretended to be against!

The next lie being peddled by this Mafia of Fake liberal sellouts like Nusrat Javeed is that Musharaf was not subjected to the Courts. And Guess who is responsible for that?

None other than the spineless Nawaz Sharif! Nawaz refused to try General Musharaf for the latter’s military coup against his own government in 1999! That coup allowed General Musharaf to establish a military dictatorship for the next 8 years during which time the judiciary even allowed him to change the Constitution to his liking.

And what did Nawaz Sharif do?

He cut the first deal that he could with Musharaf and ran away to his sugar daddies in Saudi Arabia like the coward that he is.

Asma Jehangir accused PTI’s Ali Zaidi of being “disrespectful” simply for asking her a question related to the case against Nawaz Sharif. He should have also asked her about Nawaz Sharif being her legal client and the ethical issue of her defending her client on national media. We wish Asma Jehangir was as concerned and displayed as much outrage about the Blasphemy law and capital punishment when it came to Pakistan’s Shia Muslim community as she did to a simple question concerning her client’s corruption! Citing her past accomplishments to justify her current chauvinist support for Nawaz Sharif does not constitute a valid position.