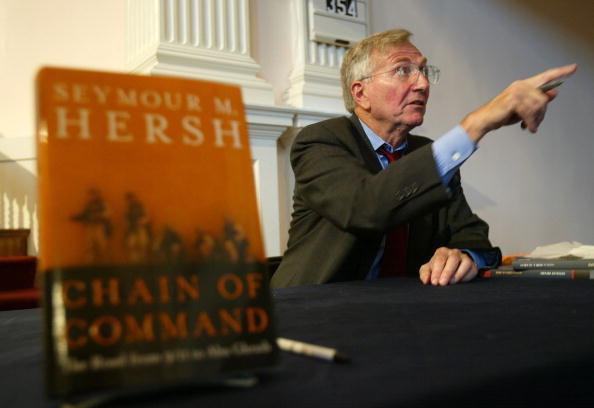 Pulitzer Prize-winning journalist Seymour Hersh believes that Hillary Clinton approved the sending of sarin gas to Syria. At a time when Clinton is trying to secure the 2016 democratic presidential nomination, Hersh is coming forward with allegations that the democratic presidential front-runner and former Secretary of State Hillary Clinton was a go-between the Obama Administration and the leaders of Middle Eastern nations (namely Saudi Arabia, Qatar, and Turkey) to set up a horrific sarin gas attack and place the blame on the shoulders of Assad. Why? So that the U.S. could invade Syria and blame Assad.

“By the terms of the agreement, funding came from Turkey, as well as Saudi Arabia and Qatar; the CIA, with the support of MI6, was responsible for getting arms from Gaddafi’s arsenals into Syria.”

Hersh didn’t elaborate as to whether the “arms” he referred to encompassed the chemical precursors for creating sarin gas, which Libya stockpiled. However, multiple independent reports have independently confirmed that Gaddafi of Libya did, indeed, possess such stockpiles. Additionally, the The Free Thought Project reports, the much-touted U.S. Consulate in Benghazi, Libya was operating as a “rat line” for Gaddafi’s weaponry while Hillary Clinton was at the helm.

Seymour Hersh isn’t the first or only reporter to publicly call out the Hillary Clinton/Syria connection. Christopher Lehmann said on October 7, 2013 that top U.S. (and Saudi) officials were responsible for the chemical weapons being used in Syria. Interestingly, Lehmann’s sources were completely different than Hersh’s.

The headline of Lehmann’s article? “Top US and Saudi Officials responsible for Chemical Weapons in Syria.”

“The US Government’s Interpretation of the Technical Intelligence It Gathered Prior to and After the August 21 Attack CANNOT POSSIBLY BE CORRECT.”

As one news outlet reports, “Obama has clearly been lying.

However, for the first documented time, Hersh has now pointed the finger at democratic presidential front-runner Hillary Clinton. Indeed, during an interview with Aternet.org, Hersh said that during the Hillary Clinton Secretary of State/Obama Administration, the Benghazi role was to “collect weapons from Libyan stockpiles and send them through Turkey into Syria for a set-up sarin-gas attack, to be blamed on Assad in order to ‘justify’ the US invading Syria, as the US had invaded Libya to eliminate Gaddafi.”

“That ambassador who was killed, he was known as a guy, from what I understand, as somebody, who would not get in the way of the CIA. As I wrote, on the day of the mission hewas meeting with the CIA base chief and the shipping company. He was certainly involved, aware and witting of everything that was going on. And there’s no way somebody in that sensitive of a position is not talking to the boss, by some channel.”

According to Hersh, this was (in fact) a large part of the Hillary Clinton State Department’s operation in Libya. While Hillary Clinton was running the show, her job description reportedly included doing to Syria what had already been done successfully in Libya.

Hersh ultimately wrote a book, The Killing of Osama bin Laden, in which an ex-U.S. intelligence official says that the Hillary Clinton White House rejected 35 targets because they were “insufficiently painful to the Assad regime.” Later, the Hillary Clinton White House put forth a target list that included, among other things civilian infrastructure.

“What would the toll to civilians have been if the White House’s proposed strike had been carried out?”

In response, Hersh said that he U.S. “tradition” had been to ignore civilian casualties, and he presumed that the tradition would continue under Hillary Clinton.

“U.S. attacks are okay or even desired (so as to terrorize the population into surrender) – not an ‘issue’, except, perhaps, for the PR people.”

When asked why Obama and Hillary Clinton are so “obsessed” with replacing Assad in Syria, the answer was not forthcoming.

“Nobody could figure out why. Our policy has always been against him [Assad]. Period.”

This White House policy came long before Hillary Clinton. Indeed, since the Ba’ath Party in 1957, Assad’s party has been the subject of a CIA coup. Why? To enable an oil pipeline for the democratic (and Hillary Clinton) favorites, the Saudi’s through Syria. Before Hillary Clinton’s decades-old plan could come to fruition; however, a multitude of Syrian coups took place.

Despite the efforts of the Hillary Clinton State Department and the Barrack Obama White House, the Trans-Arabia pipeline still doesn’t exist.

However, Obama, via Hillary Clinton, is the first U.S. president to serious tried to push for the long-anticipated Syrian regime change that would be required for the pipeline to come to pass.

The issue has drawn Russia into the most substantial conflict with the U.S. since the Cold War, all under Hillary Clinton’s leadership of the State Department.

“The US is allied with the Saud family (and with their friends, the royal families of Qatar, Kuwait, UAE, Bahrain, and Oman). Russia is allied with the leaders of Syria – as Russia had earlier been allied with Mossadegh in Iran, Arbenz in Guatemala, Allende in Chile, Hussein in Iraq, Gaddafi in Libya, and Yanukovych in Ukraine (all of whom except Syria’s Ba’ath Party, the US has successfully overthrown).”

Maybe Hersh was incorrect to proclaim that “nobody could figure out why” Obama (and previously Hillary Clinton) were so obsessed with overthrowing Assad. According to Hersh, they have all been hired to do specific jobs. Jobs that remained the same after the Warsaw Pact was disbanded.

“Hersh then said that Obama wanted to fill Syria with foreign jihadists to serve as the necessary ground forces for his planned aerial bombardment there, and, ‘if you wanted to go there and fight there in 2011-2013, Go, go, go… overthrow Bashar!’ So, they actually pushed a lot of people [jihadists] to go. I don’t think they were paying for them but they certainly gave visas.”

However, Hillary Clinton’s America is not required to ally so closely with her Middle Eastern allies.

Rather, the support of the U.S. government to the Syrian rebels is solely at the behest of Hillary Clinton and her friends. If things go right, the Hillary Clinton-supporting aristocrats in the U.S. will be both supplying salaries for jihadists and walking off with a substantial profit.

As CNN reports, Ted Cruz dropped out of the 2016 presidential race tonight. It looks like it’s going to be a contest between Donald Trump and Hillary Clinton. Do you really want a U.S. president in 2017 that is conspiring with our enemies, as Hillary Clinton is reportedly doing?