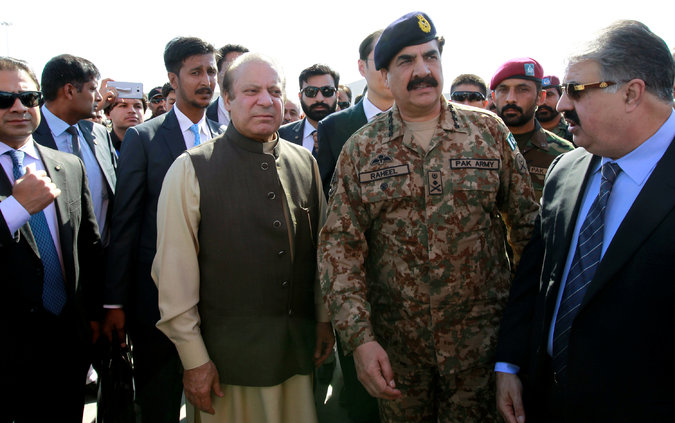 ISLAMABAD, Pakistan — The appointment of a popular Pakistani general to head a Saudi-led alliance of Muslim countries has set off a furor in Pakistan, amid fears that the move could exacerbate sectarian tensions at home.

Pakistan’s government last week approved the appointment of a former army chief, Raheel Sharif, to lead the Islamic Military Alliance, a posting announced by Saudi Arabia in January. The alliance includes several dozen mainly Muslim countries with the professed aim of countering terrorism, although it has taken no significant military actions, least of all fighting the Islamic State in Syria or Iraq.

Saudi officials have argued that the alliance’s Muslim identity will make it more effective in combating Islamic extremists, while sending a powerful message that Muslim countries reject their ideology.

But critics note that the alliance does not include predominately Shiite states like Iran and Iraq, making it more of a Sunni military alliance than an “Islamic” one. Still, the appointment of Mr. Sharif would give the Saudi-led alliance a more international sheen. Saudi Arabia has also been seeking support from Pakistan for its campaign against Houthi rebels in Yemen and may be hoping Mr. Sharif’s appointment could bolster that effort.

The Pakistan Tehreek-e-Insaf party, led by Imran Khan, has been at the forefront of opposing the decision, saying it could widen the Sunni-Shiite divide in Pakistan and upset Iran, its majority-Shiite neighbor to the west. The party says it will raise the issue in the next session of Parliament later in April.

“We strongly advocate the policy of impartiality as far as conflicts in the Middle East and Muslim world are concerned,” Mr. Khan said. “We under no circumstances should fall into any conflict and hence be watchful of the impacts of every decision or choice we make.”

And on the country’s rambunctious political talk shows, guests have been vigorously debating the appointment of Mr. Sharif, who was hugely popular for his successes against Taliban militants before retiring last year, with many expressing criticism and apprehension.

Pakistan is a predominantly Sunni country, like Saudi Arabia, but Shiites make up about 20 percent of the population and have often been targeted by extremist Sunni militants.

Saudi Arabia is a major donor to Pakistan and maintains close ties with its civil and military elite. It has appealed to Pakistan for military help with its campaign in Yemen against the Houthi rebels, who are aligned with Iran and belong to the Zaydi Shiite sect.

But Pakistan has so far stayed out of the operation, which is being conducted by Saudi Arabia and a smaller coalition of Arab countries. Egypt, too, has turned down requests for help in Yemen despite receiving considerable financial aid from Saudi Arabia.

Pakistan’s Parliament passed a resolution in 2015 urging the government to stay neutral in Yemen, where more than 10,000 people have been killed, mainly in airstrikes, since Saudi Arabia began its campaign.

So far, the government has complied, but its inability to rally support behind the Saudi military effort has been embarrassing for Prime Minister Nawaz Sharif, who lived in exile in the Saudi city of Jidda in the early 2000s. (Mr. Sharif, the prime minister, is not related to the former army chief.)

Now, the former army chief’s presence at the head of the Islamic Military Alliance could signal a change in policy, analysts say.

Mr. Sharif’s appointment “is a bit of a departure from Pakistan’s more-or-less neutral position on the Iran-Saudi regional war,” said Arif Rafiq, a political analyst. “As a result, it’s been opposed by even the mainstream, nonsectarian political voices in Pakistan.”

Mr. Rafiq said the impact on sectarian relations in Pakistan was still uncertain.

If the alliance “confronts Iran or Iranian-supported groups in places like Yemen, then it could trigger protests inside Pakistan,” he said. “On the other hand, if it is merely a symbolic coalition that limits itself to Saudi territory or focuses on combating ISIS, then the negative impact would be minimal,” he added, referring to the Islamic State, which is also known as ISIL.

Mr. Rafiq said the retired general might see himself more broadly as the leader of a military force defending the Muslim holy sites of Mecca and Medina against the Islamic State, which might be more acceptable for most Pakistanis.

“For Pakistanis, to have one of their own leading, it would be a great honor,” he said.

The establishment of the Islamic Military Alliance was announced in December 2015 by Saudi Arabia’s deputy crown prince and defense minister, Mohammed bin Salman. It had 34 state members at the start and has since acquired several others. The coalition fighting in Yemen is a smaller group of Arab countries.

Pakistan’s approval of Mr. Sharif’s appointment two months after its announcement suggested some hesitation by the government.

For Mr. Sharif, the controversy has taken some luster off the popular image he enjoyed after a successful campaign against Taliban militants that began in 2014, clearing militant strongholds in northwest Pakistan.

The general’s popularity overshadowed that of the civilian government, which has been troubled by corruption allegations. He was widely perceived as influencing foreign policy decisions and relations with neighbors, and indirectly pressuring government over political matters.

Last year, there were widespread calls for the general to take over the government instead of retiring when his term expired in November.

Since the news broke of his future job, he has maintained his characteristic silence, frustrating critics who wonder what his appointment means and the objectives of the military alliance.

“As a retired military chief seeking a high-profile job that will likely involve a great deal of shuttle diplomacy, why is General Raheel not seeking the government’s approval to address the media and respond to the misgivings in person?” an editorial in Dawn, the country’s leading English daily, asked on Tuesday. “Surely addressing the nation’s concerns ought to be the priority.”

The newspaper said the “clandestine manner” in which the government handled the general’s appointment had created the impression of a “secret deal.”

Nasser Janjua, the Pakistani national security adviser, said last week that Mr. Sharif would play a visible, proactive role in the military alliance. Mr. Sharif will “use his experiences and knowledge to remove internal misunderstandings among Muslim countries,” Mr. Janjua was quoted as saying by local news media. He did not elaborate.

Pervez Musharraf, a former army chief who ruled Pakistan as president from 2001 to 2008, was hugely popular as a general but faced a backlash once he shed his uniform and dabbled in politics. Mr. Sharif’s predecessor, Ashfaq Parvez Kayani, was also highly regarded, but became a figure of controversy after he extended his military term as corruption allegations swirled around his family.

Mr. Sharif, on the other hand, remains untainted by charges of corruption or nepotism.

“I think Raheel Sharif will be forever remembered in Pakistan as the man who boldly took on the Pakistani Taliban,” Mr. Rafiq, the analyst, said. “Many Pakistanis feel that he literally saved the country and restored its morale. This new position is unlikely to change those sentiments.”