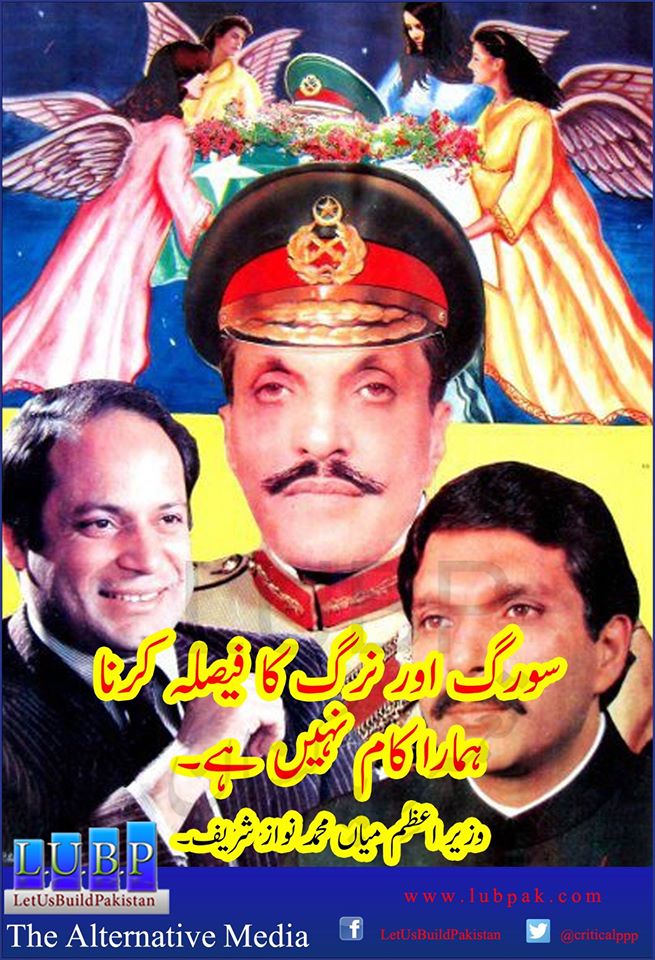 Prime Minister of Pakistan Mian Muhammad Nawaz Sharif reached Karachi on March 14, 2017 and he made a speech there in a ceremony on eve of Holi.He said:

“Agenda of those giving verdicts about heaven or hell won’t be allowed to succeed; Pakistan was created to stop clash of religions.Our government stood for complete religious freedom of all communities without discrimination. Some people have been trying to do judgement in this world regarding award of hell or paradise to people but we will not allow agenda of such people to succeed.”

We have heard from our Prime Minister such views in Lahore at Jamia Naeemia ,an old hand historical religious seminary of Sufi Sunni community where he was invited as Chief Guest at seminar on Unity of Muslim World.In that seminar he Said:

Things uttered by our Prime Minister in representative gatherings of Hindu and Sufi communities respectively are correct. But here question arises that in Pakistan in which forces and groups are responsible for distorting religious narrative of Islam? Who has agenda of distorted concept of Jihad and who is preacher of Takfir? And most important question is that who is patronizing the forces having ideology of distorted concept of Jihad and Takfir?

We know well that this was regime of General Ziaulhaq who had hired Deobandi and Salafi clerics to get manpower for militant training for waging war against armies of Soviet Union and socialist Afghanistan in 80s.Pakistani Deobandi and Salafi clerics bought Saudi Wahhabi Ideology of distorted concept of Jihad and misguided religious narrative created during this process. In that era our Prime Minister Mian Nawaz Sharif was enjoying power in Punjab and he was lovely boy of Zia regime. He then came very close to Saudi regime also. In that era SSP was founded by Deobandi cleric Haqnawaz Jhangvi and a Takfiri movement against Shiite community was started on the pattern of anti-Ahmadiyya Movement in Pakistan.That was the era in which persecution of all religious minorities get the speed and it became fast and fast but more violent. In Punjab dozens of Deobandi and Salafi Jihadist and Takfirist organizations started their hatemongering and violent work against Shiite,Sufi Sunnis,Christians,Hundu,Ahmadis. Mian Nawaz Sharif was Chief Minister of Punjab in 80s and he did not take any single step to stop such things leading toward totally distortion of religious narrative of Islam in Pakistan.

In fact Mian Nawaz Sharif made an alliance when election in 1988 was held with all those political and religious forces which were supporter of distorted concept of Jihad and misguided religious narrative. IJI was brain child of lobby of Ziaulhaq and Mian Nawaz Sharif in fact favorite horse of this lobby. Nawaz Sharif opposed every move (in direction of replacing distorted concept of Jihad and misguided religious narrative)made by newly elected government of PPP and he managed to form his provincial government in Punjab with the help of powerful lobby of Ziaulhaq in establishment. He took money from Osama bin Laden, chief and founder of Salafi global terrorist organization to destabilize PPP government. In fact Mian Muhammad Nawaz Sharif and his party used Takfiri and pro distorted jihadi ideology against his political rival PPP.

When Mian Nawaz Sharif got 2/3 majority in Parliament through biggest engineered election of Pakistan’s political history in 1997 and formed his government then he developed more process of Deobandization and Saudization in Pakistan. He made more strong his relations with Saudi royal family and their lobbies in Pakistan. Even when he was ousted by military in 1999 and he took refuge in Saudi Arab after efforts made by Saudi government he handed over himself completely to Saudi Whhabi regime. And his total surrender in front of Saudi Royal family led him to total patronage of pro Saudi Deobandi and Salafi lobbies in Pakistan.

We can see from 2008 to till this time he and his government is supporting and patronizing all such forces who are facilitator, ideologue of Jihadists and takfirist elements in Pakistan. His party made alliance with Takfiri terrorist deobandi organization ASWJ and his government is getting full support from JUI-f which is providing cover to all Takfiri Deobandi and pro Saudi Deobandi faces in Pakistan.

Mr. Nawaz Sharif thinks that he can build his liberal, progressive and enlightened image through making some wishful speeches in front of victim communities of Jihadism, Takfirism and his paid commercial liberal mafia can promote this through massive propagation of his such speeches and he can continue pro Saudi policies in Pakistan while making assure of obfuscation,denial and other clever tactics to control mainstream media and putting some sanctions on social media.

On one side Nawaz government used Deobandi Takfiris and Jihadists to manage his control on Punjab and on other side he has given free hand his some touts in Barelvis to spread fear in anti-retrogressive circles who are using Blasphemy as weapon to kill their resistance.

Reality is that Nawaz Sharif hired some big guns of commercial Liberal journalist,anchors and even some media owners who put all blame of distortion of religious narrative and current expansion of Takfirism on military establishment or on Judicial establishment and try to put impression that military establishment is trying to topple Nawaz government or to make ineffective because of liberal and enlightened stances of Mian Nawaz Sharif. But facts and ground realities deny such claims made by our commercial liberal mafia sitting in mainstream media.

If Nawaz Sharif uses religious fundamentalists like JUI-f,ASWJ,Pakistan Ulema Councils, Jamiat AhleHadith, patronizes Tablighee Jamat and makes alliance with ASWJ/SSP and backs Saudi funded Deobandi religious seminaries in Pakistan along with patronizing commercial liberal mafia and some groups in Baralvis at same times to obfuscate his links with Jihadism and Takfirism then Military establishment to obfuscate its Takfiri and Jihadist proxies in and out of Pakistan uses some its stooges in Sufi Sunnis,Shiite communities also. Military establishment now-e-days is using blasphemy weapon to counter those elements who were putting all blame on military establishment while dealing with question of faith based violence in Pakistan and directly or indirectly is busy in fake liberal image building of Nawaz Sharif. In fact forces from political,judicial,media and army (although it seems that support for Nawaz Sharif in Pakistan army is weak) who are either with Nawaz Sharif or with Anti Nawaz Sharif are using distorted and misguided religious narrative of Islam and both camps also have hired some liberal,Sufi Sunni,Shia,Hindu,Christian faces to obfuscate their relationship with Jihadism and Takfirism.

If Nawaz Sharif has Najam Sethi,Cyril Almaida, owners of Geo-Jang media group,Dawn Media group and others to obfuscate his relationship with Jihadists and Takfirists then Military Establishment has Bol Media group, ARY media group, 92 media group and others.This anti-Nawaz Sharif but pro Jihadist and Takfirist lobby in military establishment is using some liberal faces to misguide international community like Sherry Rahman, Mushahid Hussain syed,Maliha Lohdi. And to attract support from Shiite,Sufi Sunnis for narrative of Military establishment hired people like Faisal Raza Abidi,Mufti Muneeb-ur-Rahman,Hamid Raza Qadri and others are active in field. We need real,solid and not for sale progressive,secular, plural left oriented camp supporting south Asian brand of Islam not fake and commercial liberal camp of Nawaz Sharif or fake camp of pluralistic Islam created by Military establishment.