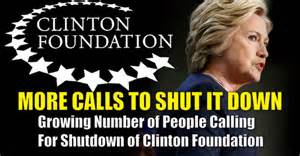 The Clinton Foundation’s pay-to-play days are over now that the Clinton family’s political ambitions are in disarray.

The Clinton Foundation is dying. Now that Hillary Clinton lost the election, donations to the foundation are drying up. Lack of donations and allegations of corruption has led it to close its global initiative program known as the Clinton Global Initiative, or CGI.

During the 2016 race for the presidency, the Clinton Foundation saw an upsurge of donations to its various departments across the world. The foundation was known for many of its crooked deals in its pay-for-play schemes as outlined by the Washington Times. Particularly noteworthy were the foreign donations made to the foundation, which included Western countries like Australia and Norway. The latter is reported to have donated $20 million just in 2015. What was especially concerning among these foreign donors was the involvement of Arab dictatorial monarchies from the Persian Gulf. Take, for instance, what Glenn Greenwald wrote for the Intercept back in the summer of 2016:

The claim that this is all just about trying to help people in need should not even pass a laugh test, let alone rational scrutiny. To see how true that is, just look at who some of the biggest donors are. Although it did not give while she was secretary of state, the Saudi regime by itself has donated between $10 million and $25 million to the Clinton Foundation, with donations coming as late as 2014, as she prepared her presidential run. A group called “Friends of Saudi Arabia,” co-founded “by a Saudi Prince,” gave an additional amount between $1 million and $5 million. The Clinton Foundation says that between $1 million and $5 million was also donated by “the State of Qatar,” the United Arab Emirates, and the government of Brunei. “The State of Kuwait” has donated between $5 million and $10 million.

Theoretically, one could say that these regimes — among the most repressive and regressive in the world — are donating because they deeply believe in the charitable work of the Clinton Foundation and want to help those in need. Is there a single person on the planet who actually believes this? Is Clinton loyalty really so strong that people are going to argue with a straight face that the reason the Saudi, Qatari, Kuwaiti and Emirates regimes donated large amounts of money to the Clinton Foundation is because those regimes simply want to help the foundation achieve its magnanimous goals?

Yes, the Saudis, known for chopping off the heads of witches, banning women from driving and brutalizing its Shia minority somehow wants to help the cause of women, democracy and human rights around the world? Let’s take a closer look at how Saudis treat women and their fellow residents if they are unlucky enough to be non-male, non-Saudi, non-Sunni, non-Muslim…

You have to be insane to believe that somehow Saudi Arabia wants to promote democracy and human rights in the world. The UN is one of those unique delusional institutions that believes it for why else would it give it the UN Human Rights Council seat despite Saudi Arabia maiming and killing helpless children in Yemen? Well, maybe they know Saudi Arabia doesn’t deserve it, but the UN is mired in corruption and merely does the bidding of its donors of which Saudi Arabia is one.  Saudi Arabia, for example, blackmailed and threatened to withdraw its funding from the UN if it did not remove it from the blacklist of children’s rights violations. The UN naturally complied, prompting outcry from human rights groups.

With the Clinton Foundation, there was obviously a tit for tat that went on, that is, a you scratch my back and I scratch yours kind of deal. The Saudis were rewarded generously for their contributions to the Clinton Foundation, including a $29 billion worth of F-35 sales which was even cause for concern for the Israelis, resulting in a formal complaint to then  U.S Secretary of Defense Robert Gates.

Bahrain was also one of those murderous monarchies that participated in this pay-for-play game with the Clinton Foundation. In one report, the International Business Times reported the following:

Salman has directed $32 million to a Clinton Foundation program, and the Kingdom of Bahrain has donated up to $100,000 more. As Bahrain money flowed into the Clinton Foundation, State Department documents showed that between 2010 and 2012 the Clinton-led State Department approved $630 million worth of direct commercial arms sales to Salman’s military forces in Bahrain. That was a 187 percent increase from the period 2006 to 2008, and the increase came as Bahrain was violently suppressing uprisings.

But now that the Clinton dynasty’s political ambitions have come to an end, so are the donations. RT, for example, has recently reported that Norway cut its donations from $20 million in 2015 to a mere $4.2 million now. Australia, which gave the Clinton Foundation $88 million over ten years has ended its partnership with the foundation. This drop in donations brought about the shut down of the Clinton Global Initiative (a branch of the Clinton Donations) due to the lack of funds that helped sustain it. This shut down also came with the realization that there is no point in keeping it as the tit-for-tat game is over now that the Clinton dynasty’s political aspirations are now dead.

Although the Foundation has helped many of the poor across the world, the drying up of donations may be a breath of fresh air for those oppressed minorities in the world who suffered and continue to suffer under weapons which then Secretary of State Hillary Clinton granted to murderous Arab regimes, including the Bahraini, Qatari and Saudi royals whom Hillary Clinton knew were directly funding ISIS. The women and children who have had their lives destroyed by ISIS and these murderous monarchies may now find some relief.