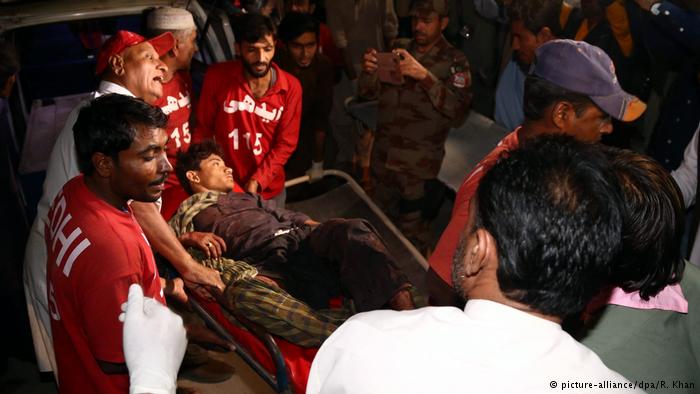 The attack took place at the famous Shah Noorani shrine, in the Lasbela district of the volatile Baluchistan province.

It happened as worshippers performed the dhamal – a mystical dance – paying tribute to the famous sufi preacher Hazrat Baba Shah Noorani. His shrine, where followers of mystical Islam regularly gather, is more than 500 years old.

No group has yet claimed responsibility for the attack, but Taliban militants have been known to attack shrines in the region in the past.

Pakistan is facing a protracted separatist insurgency in the southwestern Baluchistan province. But hard-line Islamist groups are also active in the area and have regularly attacked minorities and followers of other Islamic denominations.

In October, Islamist militants killed more than 60 people, mostly cadets, in a police academy in Quetta, the capital city of Baluchistan. In August, a suicide bombing on a hospital in the same city killed 73 people, many of them lawyers mourning a colleague who had been fatally shot. Both “Islamic State” (IS) and a faction of the Pakistani Taliban claimed the attack.

“The security situation in Baluchistan is extremely bad. A number of militant groups are fighting in the province – the Baluch separatists, the Lashkar-e-Jhangvi and IS,” Hassan Sheerazi, a journalist associated with Pakistan’s Dawn newspaper, told DW.

“Mystical Islam brings together people from diverse ethnic, religious and cultural backgrounds. That is the reason why Islamist militants target shrines. A few years ago, the extremists attacked the Abdullah Shah Ghazi shrine in the southern Pakistani city of Karachi,” Sheerazi added.

An attack on pluralism

The militants – most of whom belong to the Saudi-Wahhabi sect of Islam – have attacked a number of Sufi shrines in many Pakistani cities in the past, killing scores of devotees, who mostly belonged to the minority Shiite Islamic group or the majority Sunni Barelvi sect.

Historians say that both Shiites and Barelvis believe in a wide cultural interpretation of Islam and seek inspiration from the Persian and Arabic saints, who played a role in spreading Islam throughout the Indian subcontinent. Many Shiites and Barelvis also revere mystics of Indian origin and regularly visit their shrines which are spread throughout India and Pakistan. These Muslim saints are equally loved by Hindus, Sikhs, Christians and Jews in South Asia.

The Wahhabis, which are a relatively small group among the Sunnis, believe in “puritan Islam” and consider pilgrimages to shrines outside of the Islamic faith to be against the teachings of Islam’s prophet, Muhammad.

“Wahhabis are against any cultural pluralism, so they attack shrines, music festivals and other cultural centers that are not Islamic in their view,” Dr. Mubarak Ali, a renowned Pakistani historian, told DW. The influence of Saudi Arabia had seeped into the psyche of many Pakistanis, causing an “Arabization” of their many traditions, he added.

Many Pakistani analysts, including Ali, say that the zealot Wahhabi groups and political parties not only frown upon pilgrimages to non-Islamic shrines, they also endorse the demolition of historical Muslim sites, and emulate Saudi Arabia in this regard.

Shoaib Ashraf, a lawyer and human rights activist in Karachi, told DW that Islamist militants were bent on destroying the diverse cultural fabric of Pakistani society. “Pakistan cannot afford this kind of extremism. It is facing several crises at the moment but this is going to do an irreparable damage to the country. Pakistan will not survive if a minority forcefully imposes its extremist agenda on the majority,” he warned.

Attiya Dawood, a writer and peace activist, told DW that the love for saints ran deep in hundreds of thousands of people in Pakistan and that a big number of Pakistanis went to the shrines and listened to qawwali, or Sufi music. “The Taliban want to create fear among the people by attacking their sacred places in order to restrict their social mobility and freedom,” she said.

Many Pakistani analysts think that political rather than religious reasons are behind the attacks on shrines and followers of the saints, since mystical Islam provides a counter-narrative to extremist Islam and is probably the biggest ideological threat to the Wahhabis. Some believe that mystical Islam could be more effective in defeating the Taliban than any military operation.

Experts, however, say that the policies of the Pakistani state are not in favor of the proponents of Sufi Islam and are thus emboldening extremists. “As long as the Pakistani state and security agencies continue to use Wahhabism as a dominant state narrative, attacks on shrines and their devotees will not cease,” warned Ashraf.

Historian Ali also pointed out that Wahhabi groups and organizations enjoyed state patronage and flourished at the expense of other groups, which in the past had been snubbed by the government. “It is a bit strange, because Wahhabism is a minority Sunni sect in Pakistan,” Ali said.

The frequent militant attacks in Pakistan have angered the public. Many people now question the military’s claim that its ongoing operation against Islamists along the Afghan border has been a success. The army says it has killed 3,500 terrorists since the launch of the Zarb-e-Azb military campaign in June 2014.

“The attacks show that the military’s much-touted Zarb-e Azb operation and the National Action Plan to eradicate terrorism from Pakistani soil have been failures, despite Pakistani army chief Raheel Sharif’s claims of victory,” Arif Jamal, a US-based expert on security and Islamism, told DW. “The terror infrastructure is intact in the country and the militants intensify their attacks on the Pakistani state whenever they want to,” he added.

Peace activists demand that the Pakistani government not only abandon its support for zealot Wahhabis, but also promote pluralistic Islam. This, they say, would not only be beneficial to Pakistani society in the long run, but would also improve the international community’s image of Pakistan.