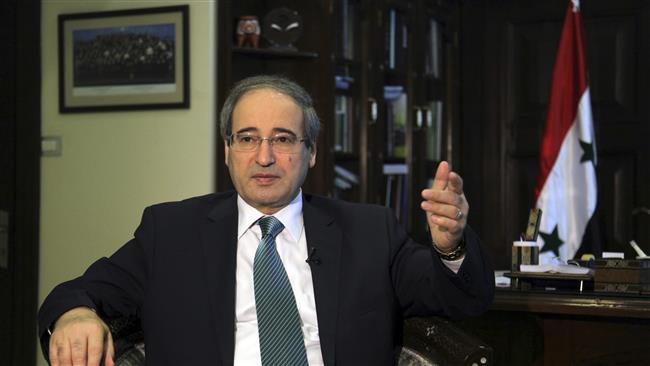 A senior Syrian official has roundly rejected as part of “a campaign of lies” recent allegations by Western media outlets that the Damascus government is using chemical weapons in its anti-terror operations across the Arab country.

“The multitude of accusations, made in some Western circles without any tangible evidence, as to the responsibility of the Syrian government in cases of use of toxic chemicals are but a part of a coordinated and repeated campaign of lies,” Syrian Deputy Foreign Minister Faisal al-Mekdad said at the annual conference of countries belonging to the Organization for the Prohibition of Chemical Weapons (OPCW) in The Hague on Monday.

He further rejected reports by the Joint Investigative Mechanism — a panel set up by the UN — that Syrian forces are responsible for three chemical attacks between 2014 and 2015, stressing that the accounts were made on “the basis of inaccurate and unconvincing findings,” adding that the report “undermines the credibility of the OPCW.”

The Syrian government turned over its entire chemical stockpile under a deal negotiated by Russia and the United States back in 2013. The OPCW has overseen operations to remove the chemical arsenal from Syria.

The deal came after hundreds of people were killed in an August 2013 chemical attack in the Ghouta suburb of Damascus. The rockets used in the assault were reportedly handmade and contained sarin gas.

While the Syrian government denied involvement in the deadly attack, it agreed to have its chemical stockpiles dismantled.

This comes as Daesh has frequently used chemical weapons both in Syria and Iraq, where the Takfiri terrorist group is mainly active.

On October 30, at least 35 people were affected after foreign-sponsored Takfiri terrorists launched a barrage of shells loaded with poisonous gas against government-held Dahiyat al-Assad and Hamdaniyah neighborhoods in Aleppo.

The victims were quickly transported to Aleppo University Hospital and al-Razi Hospital to receive treatment for sickness, shortness of breath, mydriasis, muscle spasms and numbness.