Home  »  Newspaper Articles   »   An obituary of The New York Times 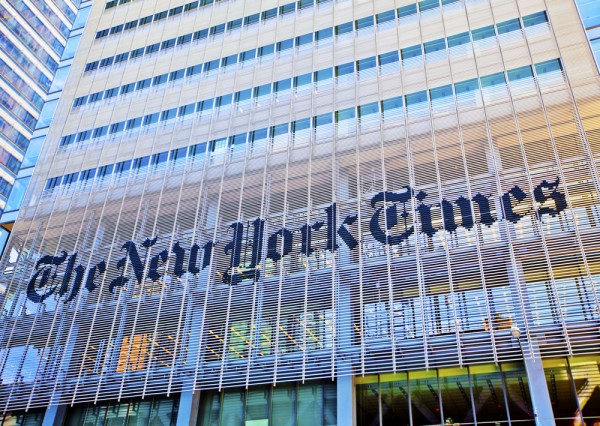 Working with the government to suppress stories, covering up election fraud in the ruling party and ruthlessly campaigning against the main US opposition leader, The New York Times has sentenced itself to wither away into irrelevance. Remembered only in history books as a relic of the Cold War, much like its sister newspaper Pravda of the Soviet Union. The New York Times R.I.P.

A few years ago I had the pleasure of meeting Arthur Sulzberger, Jr. and Bill Keller at The New York Times building on Manhattan. Keller was the long time editor in chief of the newspaper and Sulzberger its proprietor. We met at what must have been the 50th floor of the company headquarters, on 8th Avenue. I write company headquarters, instead of newspaper, because this part of the building was accessible only through a separate elevator-system and was strictly off-limits for the regular New York Times reporters. We spoke for about an hour and a half for the film Mediastan that I was shooting at the time, and now in hindsight, I’m both grateful and surprised by how honestly the administrative and real heads of the enterprise described the nature of their work. Grateful, because the degree of openness they exhibited is a rarity in the backrooms of journalism. Surprised, because what they were doing wasn’t journalism, at least not in the sense that I had been taught in journalism school in Sweden. No, the work that Keller and Sulzberger were describing was something entirely different, and as such it was a shame that this part of the building was off-limits to the journalists of their own newspaper. Because, as I would soon realize, the upper levels of the New York Times building was a place where a variety of important political decisions were negotiated and taken. A space, ironically, very far from scrutiny of the pubic eye.

The walls of the meeting-room were I sat down with Bill Keller and Arthur Sulzberger, Jr. were adorned by signed portraits of important people that had visited this off-limits place. The editor at the company proudly explained that this was the “Hall of Fame”, and that The New York Times was like an embassy for important people from across the world. There was also the obligatory centrepiece – I had filmed the same thing so many times in the Middle East and in the Central Asian republics, but I must admit that I was surprised to see it here – at the head of the table was a framed and signed photograph of the president. The handwritten message on it said: “To Arthur- thank you for a memorable editorial board meeting. Barack Obama”.

This off-limits part of the building was not only where the president would sit in on editorial board meetings, it was also the place where Libyan leader Muammar Gaddafi was received when he successfully negotiated to be removed from “The Axis of Evil” list after 9/11. At that point in time The New York Times was still considered perhaps the most important publication in the world, and what it wrote was thought to have a direct impact on the life and death of nations. Because of this, many powerful people would put a lot of effort and money into gaining preferable coverage from The New York Times. These floors, Bill Keller told me, was where the proprietor and the editors of the newspaper would meet with and negotiate deals with powerful visitors. In retrospect, whatever “deal” that Gaddafi struck with The New York Times, the exonerating article penned by Judith Miller didn’t save his life, nor did it save his nation from the might of the US air force.

Despite the brutal fate that Gaddafi came to face, the assumption that The New York Times was capable of making meaningful deals with governments was not entirely unfounded. Bill Keller spoke of how he successfully negotiated to freeze the NSA warrantless wiretapping-story uncovered by Eric Lichtblau for two years until after the re-election of George W Bush. This top-floor was also where the Iraq WMD evidence was concocted with the help of the Pentagon and handed to reporter Judith Miller to pen, later letting her hang when the wind changed. This, Keller also told me, was where the CIA and State Department officials were invited to take part in daily editorial meetings when State Department Cables were published by WikiLeaks. I would personally witness how this was the place where Sulzberger himself oversaw the re-election coverage of president Obama. And this was much later where the main tax-evaders of the US would make their cases so that the Panama Papers on their tax records would never reach the public eye (which at the time of writing, they have yet to be).

As a Swedish journalist, educated in large part on Anglo-Saxon literature, I had together with many of my peers seen The New York Times as a guiding star in standards of journalism. Its feat in publishing the Pentagon Papers- the proof that the United States had fabricated the reasons for going to war with Vietnam- was something that we read about in school, and it inspired me to want to work in the profession and uncover the dirty deals of my own government. Imagine my surprise when I saw that the very same paper had these special floors, off-limits to journalists, where the dodgiest deals with the dodgiest figures were being brokered, and that the heads of this newspaper were not even embarrassed about it. Rather, quite the contrary, they seemed to gloat.

After meeting with Keller and Sulzberger at The New York Times, I felt a heavy sense of sadness about what I had witnessed. I felt sad for the staff of the newspaper, many of whom had gone through great risks for their profession and their audience. I felt sad for my generation of journalists who had been robbed of a role-model in journalism. And I felt sad for the American readers, many of whom still had no idea of what was happening on the top floors of The New York Times Building on 8th Avenue.

Since the last few months I am however no longer sad about any of this, for during the current election cycle in the United States, The New York Times has so clearly abandoned all rudimentary standards of journalism and alienated its readership so badly, that it has sentenced itself to wither away into irrelevance. Remembered only in history books as a relic of the Cold War, much like its sister newspaper Pravda of the Soviet Union.

As a Swedish reader of The New York Times, I may be surprised that the paper has ignored election rigging in the governing party of the United States serious enough to cause its top five officials to resign. But it doesn’t really matter, since I can read the source material on it via WikiLeaks. As a foreign journalist I may be surprised that the paper has chosen to downplay the political bribes of the Clinton Foundation, but it makes little difference because the Associated Press has made the investigation available for me to report on. As a citizen of a western democracy I may be surprised that The New York Times so clearly campaigns against Trump and for Clinton, rather than reports on the policy issues of the candidates, but I can ignore this since I can read and listen to what they say themselves, while I can get a variety of more enlightened and entertaining campaigns all over the blogosphere. If I were a US citizen however, I would be more than just surprised.

And this is where The New York Times has lost it. By dropping its veneer and abandoning its self acclaimed standards of journalism, it has sentenced itself into irrelevance. Because even if the newspaper has steadily been outflanked by many blogs when it comes to audience size, it was until recently considered to be an important platform from which the US elites formed their world-view. But a newspaper with such a small reach, that is no longer taken seriously even by the main presidential candidates of its own country, a newspaper that doesn’t abide by the most fundamental journalistic standards, namely publishing rather than hiding newsworthy, correct information, has very little to offer either any powerful people or its own readers. Because even propaganda has to be good, for it to have any value.

The only question that now remains, is how history will remember the journalists of The New York Times. Will they be judged leniently as people that just did their jobs, not knowing what they were doing? Or will they suffer the same fate as the thousands of Soviet journalists who lost their jobs when the charade at their communist mouthpieces ended? I much suspect that it will be the latter. But I also suspect that much like the heads of the Soviet newspapers quickly adapted to the new rules and new rulers of the game while regular journalists were sentenced to life of unemployment, so will Sulzberger and Keller adapt to whatever will come while the staff of The New York Times will be sentenced to their very own “Hall of Shame”, much like already happened to their colleague Judith Miller when her services on propagating for war with Iraq was no longer required.

I enclose as a small eulogy the following email exchange with a couple of editors from The New York Times. The emails are significant if only as examples of how the newspaper stopped living up to the most basic elements of journalism towards the end of its life. In them editors Bruce Headlam and Isvett Verde explain that The New York Times does not correct mistakes, does not grant the right of reply, and does not, as a matter of policy, publish material about its own censorship.

If you have any other documents pertaining to the demise of The New York Times, please email them to me or send them to WikiLeaks. One of these days I will collect them for a proper obituary.