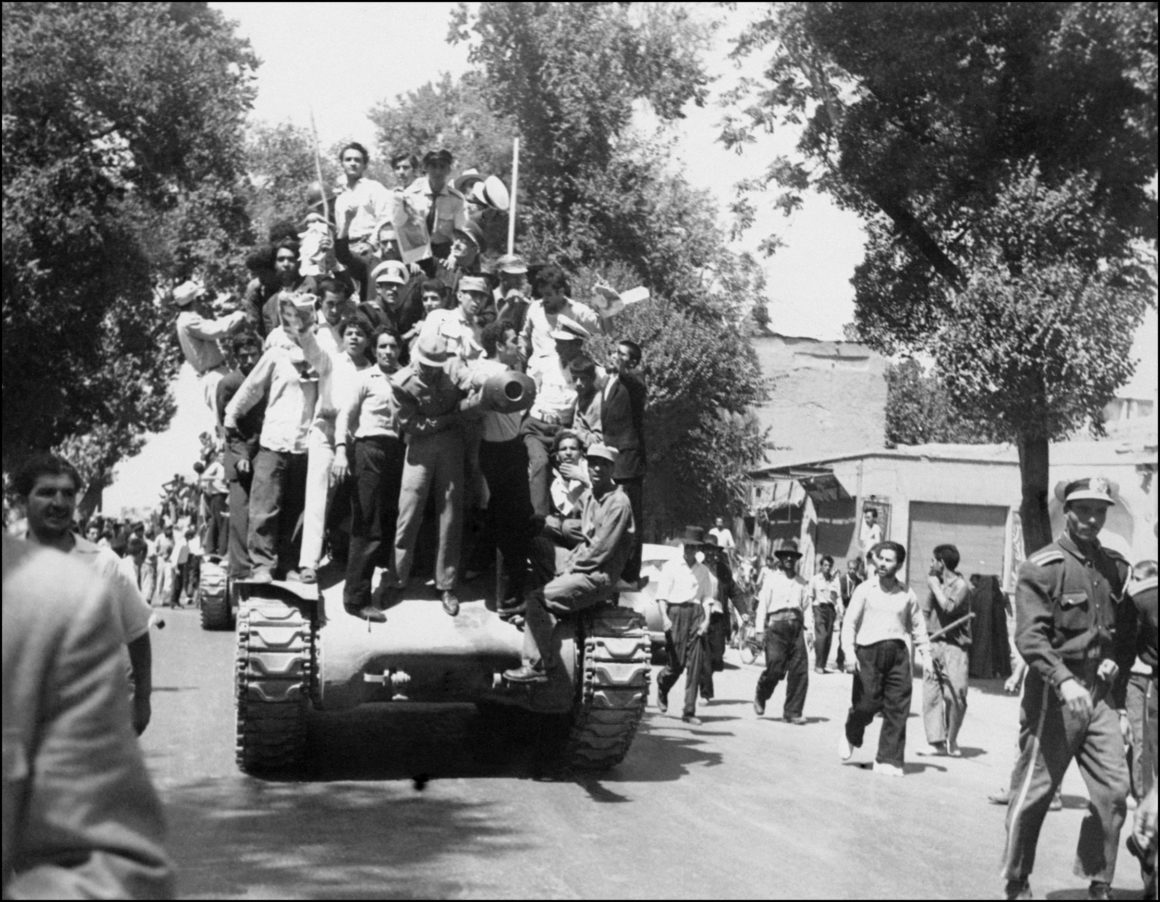 Sixty-three years ago, the CIA and British intelligence fomented a coup d’état that toppled the prime minister of Iran, restored a cooperative shah and strengthened a regional buffer against possible Soviet aggression. It also unwittingly set Iran on a course toward dictatorship and helped inject the 1979 Iranian revolution with an anti-American cast that continues to animate hardline elements within the current regime.

More than six decades later, the coup against Mohammad Mosaddeq and its aftermath are still haunting U.S.-Iran relations. Yet amazingly, Americans do not have access to the full historical record of U.S. involvement in the event, even though much of that record (at least the parts the CIA has not destroyed, by its own admission) is unclassified.

Most recently, John Kerry’s State Department, which has shown real acumen in dealing with Iran, has decided not to release its long-overdue official compilation of internal documents on U.S. diplomacy covering the coup period, basing its reasoning on a concern for the fragility of relations with Iran.

The desire to protect the hard-won 2015 nuclear accord is fully understandable, but this decision appears to be based on misperceptions about the risks — and a disregard for the potential benefits — of releasing this important historical material.

Specifically, the State Department is declining to publish the relevant volume in its venerable series, Foreign Relations of the United States (FRUS), the “official documentary historical record” of U.S. foreign policy, according to the State Department’s web site. The series has already endured one major public scandal over its Iran coverage. In 1989, the State Department published a volume on the early 1950s that deliberately airbrushed out any trace of American and British authorship of the coup.

Scholars called it a fraud, and Congress was sufficiently outraged to pass legislation requiring FRUS to present a “thorough, accurate, and reliable documentary record” of American policy. The State Department Historian’s Office promised a make-up volume, which it painstakingly compiled several years ago and expected to publish in 2013. In other words, as the Department’s own historical advisory committee noted in its latest annual report, it is finished and ready to go. But it has yet to appear.

Rioters armed with staves are chased by Persian soldiers during riots in Tehran, August 1953 | AFP via Getty Images

Numerous excuses for refusing to publish documentation on the Iran coup have surfaced over the years. A standard rationale invoked by the intelligence community on a wide range of subjects has been the need to safeguard “sources and methods.” Protecting individuals from harm is praiseworthy, though arguably less meaningful in cases such as this when every major participant is deceased. Protecting methods is also perfectly reasonable in theory, but CIA claims deserve some scrutiny when the agency has used similar assertions to keep World War I-era techniques like the use of invisible ink classified until almost a century later — far beyond the method’s usefulness.

Besides, a 200-page internal CIA history of the coup that leaked to the New York Times in 2000, as well as two other agency histories that have been partially declassified under the Freedom of Information Act, have almost certainly revealed every method the agency utilized in 1953.

Another basis for State Department and CIA interest in blocking access to these records has been the desire to honor a British government request to keep a lid on their part in the coup. The problem with this rationale is that the lid has been off for years. For example, Kermit Roosevelt, who ran the operation in Tehran, published an entire memoir about it in the late 1970s — with CIA consent — and it included references to British involvement. Furthermore, the 200-page CIA history mentioned above contains extensive detail about the British role in planning the operation. In the extraordinarily unlikely event that there is specific information that still deserves protection, government declassifiers can always excise the particulars while leaving the larger picture intact.

In recent years, the CIA appears to be placing less stock in some of these older excuses when it comes to Iran in 1953. To its credit, in 2011 the agency finally declassified part of an internal document confirming its coup activities, and its historical staff reportedly cooperated well recently with their State Department counterparts in compiling the FRUS volume. Other parts of the government have become more candid as well. Two presidents, Bill Clinton and Barack Obama, have broken with precedent and publicly owned up to the U.S. role in the coup.

But now, the State Department has latched on to another reason for officially denying public access to the full historical record: the fear of a harsh reaction from Tehran. This concern first came up in connection with the FRUS series as early as 1978, when one of State’s leading experts on Iran warned his British For­­eign Office counterparts that documents were about to be published with “possibly damaging consequences” for London and the Shah. (Ironically, that discussion and subsequent British efforts to suppress the publication are described in detail in records that are freely available in the British archives — even though the underlying history of the coup is still draped in secrecy.)

The problem with this rationale is that, so many years later, the administration’s anxieties over lasting damage coming from the Islamic Republic have simply not been supported by experience.

The Iranian people, it turns out, have been pretty well informed for years about the U.S. role in the mid-century coup.

Previous coup revelations, whether leaked or official, have indeed met with sharp responses from Tehran, in the form of Friday Prayer speeches, media articles or even parliamentary resolutions. But in every case, the story soon dies and politics return to what passes for normal in Iran, regardless of whether the country is in a state of revolution, reform or retrenchment.

The Iranian people, it turns out, have been pretty well informed for years about the U.S. role in the mid-century coup. In 2000, when I participated in a conference in Tehran on Mosaddeq and the oil nationalization period, a few weeks after the New York Times published the CIA’s still-secret history of the coup, conference-goers — and the Iranian press — were plainly unimpressed at what they saw as old news about U.S. interference in their affairs — something they had long taken as a given. They were much more absorbed by discussions about the roles various Iranians might have played in Mosaddeq’s overthrow.

The fact is that if hardliners want to mount a campaign against the nuclear deal — as they have before and undoubtedly will again — they will find an excuse. They don’t need anyone else to provide one.

Just as exposing fresh evidence about the 1953 coup has not demonstrably hurt U.S. interests, experience shows that blocking its release has not provided any notable benefit. American and British officials back in 1978 wanted to spare the Shah from the “embarrassing things” they expected to find in the pending FRUS volume. But their alarm over that prospect now seems pathetically misplaced given that the entire monarchy was swept from power by the revolution just a few weeks later.

Then — as now — far greater political, economic and social forces were at work inside Iran. In the coming months and years, if the nuclear deal sinks or President Hassan Rouhani fails to win reelection in 2017, it will be because of the actions of very powerful actors inside the country looking out for their own tangible, personal and institutional stakes — not because of yet another round of putative “revelations” about an event decades old.

Instead of holding onto the past, the State Department has an opportunity here. The consensus of Iran experts I have spoken with in recent weeks is this: Why not deny hardliners once and for all the benefits they’ve been reaping from this propaganda gift? Claim the high road by throwing open the available record even on our most awkward episodes. Identify this for what it is — a gesture of respect to the Iranian people — and call on Tehran to act in kind by acknowledging that both sides have historical reasons to claim grievances against the other.

Looking beyond Iran, releasing the FRUS volume would contribute to other worthwhile goals. It would give a boost to the president’s lofty commitment to greater openness, a part of his record that has come under fire from his supporters in recent years. More importantly, it would at last provide the American people access to a chapter of their recent history they have every right to see. It would even strike a blow for the currently unfashionable principle of judging our past — and our elected officials — on the basis of historical fact rather than self-serving partisan invention.

Malcolm Byrne runs a project on U.S.-Iran relations at the nongovernmental National Security Archive based at The George Washington University. The views presented here are his own.