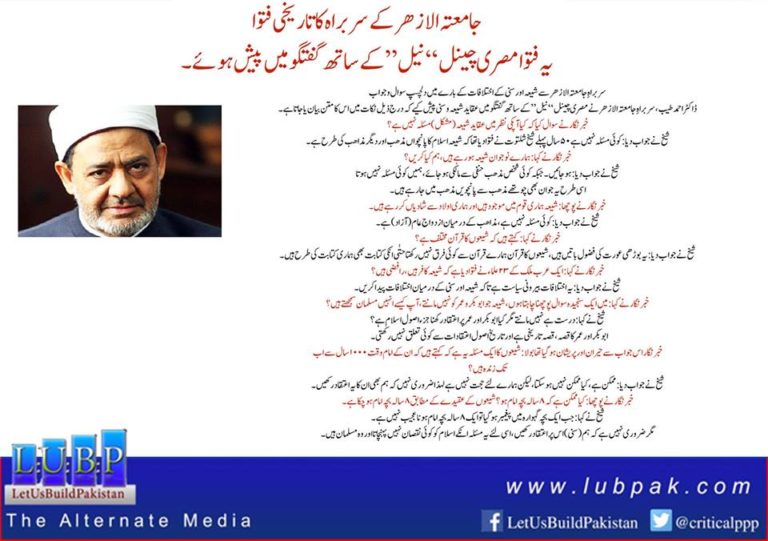 Q. In your opinion, isn’t there any problem in Shia Beliefs?

A. Never, 50 years ago Shaikh Mahmood Shaltoot, the then Chancellor of Al Azhar, had issued a fatwa that Shia School is the fifth Islamic School and as like as the other schools.

Q. Our children are embracing Shia Islam, what should we do?

A. Let them convert and to embrace Shia School. If someone leaves Maliki or Hanafi Sect, do we criticize him? These children are just leaving fourth school and join the fifth.

Q. The Shias are becoming relatives with us and they are getting married with our children?

A. What is wrong with this, marriage between religions is allowed.

Q. It is said that the Shias have a different Quran?

A. These are the myths and superstitions of the elderly women. Shia Quran has no any difference with ours, and even the script of their Quran is like our alphabet.

Q. 23 clerics of a country (Saudi Arabia) issued a fatwa that the Shia are infidels, heretics (Kafirs)?

A. Al-Azhar is the only authority to issue fatwa for Muslims; therefore the above said fatwa is invalid and unreliable.

Q. So what does the difference – being raised between the Shia and the Sunni – mean?

A. These differences are the part of the policies of foreign powers who seek conflict between The Shia and the Sunni.

Q. I have a very serious question that “the Shia do not accept Abu Bakr and Umar, how you can say they are Muslims?

Q. (The reporter surprised by the response, asks) Shia has a fundamental problem and that is ”they say that their Imam the time (امام العصر) is still alive after 1,000 years”

A. He may be alive, why is it not possible? But there is no reason that we – as Sunni – should believe just like them.

Q. (Referring to Imam Mohammad Taqi al-Jawad AS, (the 9th Imam of Shias) the reporter asked) The Shias believe that one of their Imams was just eight-year old when he became Imam; is it possible that an eight-year-old child be the Imam?

A. If an infant in a cradle can be a prophet (Issa AS), then why an eight-year-old child can not be the Imam? It is not strange. Although we may not accept this belief as we are Sunni. However, this belief does not harm their Islam, and they are Muslims.