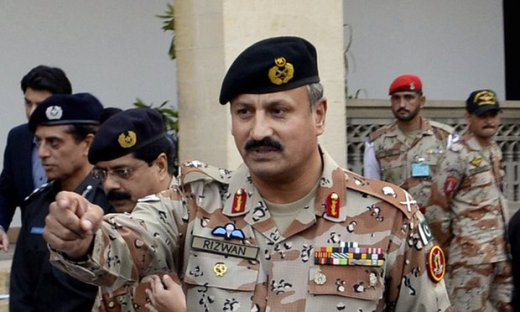 God of Liberal Commercial Mafia Surrendered himself in front of Bootwals and saved his skin on Monday. Cyril Almeida a poor guy from Journalist community is new scapegoat. His name is on Exist Control List. And PM directed that those responsible should be identified for stern action”. Shall this fake liberal God take actions against those who were responsible for helping Osama bin laden in taking refuge in Abbottabad near garrison?

In Pakistan now we are seeing another Drama of curbing the freedom of Press,which already has been near to death in the case of criticism on policy of military establishment. On this time victim is Dawn Media group and its renowned journalist Cyril Almeida.

A report filed by Cyril Almeida appeared in daily Dawn on Thursday, 6 Oct, 2016 with headline: Exclusive: “

“As a result of the most recent meeting, an undisclosed one on the day of the All Parties’ Conference on Monday, at least two sets of actions have been agreed.

First, ISI DG Gen Rizwan Akhtar, accompanied by National Security Adviser Nasser Janjua, is to travel to each of the four provinces with a message for provincial apex committees and ISI sector commanders.

The message: military-led intelligence agencies are not to interfere if law enforcement acts against militant groups that are banned or until now considered off-limits for civilian action. Gen Akhtar’s inter-provincial tour has begun with a visit to Lahore.

Second, Prime Minister Nawaz Sharif has directed that fresh attempts be made to conclude the Pathankot investigation and restart the stalled Mumbai attacks-related trials in a Rawalpindi antiterrorism court “, reported in that story.

This exclusive news story became viral on social media and our some liberal pro-Nawaz Sharif analysts started to tell us that Prime Minister Nawaz Sharif and his younger brother Shahbaz Sharif are not now in mood of surrendering in front of military establishment and civilian government is going to throw policy of strategic depth in dustbin. But Alas! Once again they proved wrong and we realized that they are living in a mirage. PM office not only rejected report filed by Cyril Almeida in Dawn but called it against state and national interest of state.

“The participants expressed concern over the publication of a “fabricated news story” in Daily Dawn pertaining to security issues purportedly discussed in a meeting of National Security Committee last week.

The statement said, “the participants were unanimous that the published story was clearly violative of universally acknowledged principles of reporting on National Security issues and has risked the vital state interests through inclusion of inaccurate and misleading contents which had no relevance to actual discussion and facts”, said in statement released after   a meeting of the top civilian and military leadership on Monday,10,2o16.

“The participants felt that it was imperative that Print and Electronic media refrained itself from speculative reporting and issues of national security and interests of the state”, said in that statement issued by PM Office.

According to the statement, “Prime Minister took serious notice of the violation and directed that those responsible should be identified for stern action”.

Statement issued by PM office shows that Prime Minister of Pakistan and his other civilian comrades are not in mood to resist military establishment, so our so called very democratic and anti-military establishment PM and its brave comrade collapsed in front of Bootwals ( Military Establishment). This statement exposed those persons in our liberal circle who were busy to tell masses that Mian Muhammad Nawaz Sharif and his comrades have separated themselves with militaristic policies and Mian Nawaz Sharif is now completely changed leader having strong inclination toward liberal, enlightened and progressive policies on question of our foreign and national Policy.

Path which adopted by PM office on Monday tells us that Military Establishment is on driving seat not Civilian government on Question of Afghan Policy , Kashmir Issue , of Jihadist and sectarian organizations.

Cyril Almeida is included in those journalists who always remain on side of democracy and want supremacy of civilian elected leadership in state system. I follow Cyril Almeida tweets, read his analysis and report. I feel that he was wrong when he was expecting from PM Nawaz Sharif and our other civilian political elites to show some solid resistance against their War-Mania based strategic policy. Our contemporary political elites cannot do this. Case of Hussain Haqqani during Memogate Saga strengthens my view. Pakistan Peoples Party although protected Hussain Haqqani fully and former Prime Minister showed courage while keeping him in PM House in Islamabad and made a bravest speech in Parliament on that issue while saying that we shall not bear state in state but end result was that Hussain Haqqani were forced to resign and another puppet of military establishment was appointed Ambassador of Pakistan in US and we saw surrendering of PPP government.

I met former Prime Minister Yousaf Raza Gailani at his residence and made an interview with him. During our discussion I tried much to know things happened during his premiership on the record but he was not ready. There were gossips in his closed circle of friends in those days that he and his family members were being threatened by those militants who were enjoying supports from those spy masters who are running our policy on Afghanistan and Kashmir. This is also impression in his friends that former Prime Minister was punished due to his strong stance during Memogate Saga or Darama in Pakistan and kidnapping of his son was also part of this punishment.

“Puzzled, saddened. Had no intention of going anywhere; this is my home. Pakistan”

“I feel sad tonight. This is my life, my country. What went wrong?”

“Was a long-planned trip, for at least several moths now. There are certain things that I will never, ever forgive”

These are tweets appeared on tweet account of Cyril Almeida and these tweets supports my impression about his wrong expectations with our political elites particularly with PM Nawaz Sharif.

Liberal Section which was falsely busy in image building of Mian Nawaz Sharif as military establishment liberal politician now is busy in controlling damage after issuing statement against Dawn media group and its reporter Cyril Almeida. Head of this group Najam Sethi’s tweet appeared as comment under tweet of Cyril this;

Najam Sethi and his comrades in fact running a project of image building of Nawaz Sharif as anti-establishment statesman for many years due to those perks and privileges which they are getting from Nawaz Sharif. They obfuscated his and his Brother CM Punjab’s links with Takfirists Deobandi terrorist organizations like ASWJ aka SSP, JUD, Jaish-i-Muhammad and others. They never exposed their relation with Hafiz Saeed and JUD.

According to former President of Pakistan Asif Ali Zardari that was younger brother of Mian Shahbaz Sharif CM of Punjab who leaked information about expected action of  seizing accounts of JUD from federal government. Nawz Sharif’s links with Saudi Arab and his cliental role also never came under discussion in writings and TV talk shows of these commercial liberal mafia led by Najam Sethi.

This section is obfuscating criminal silence of their so called liberal God Nawaz Sharif on plight of Baloch people. They never told their reader and audience that on Mega projects discourse of civilian political leadership is not different with military establishment. To speak or write differently from state’s official stance on CPEC is against state and national interests.

Therefore we see no change in policies on Baluchistan in era of rule of PMl-N. Enforced missing , kidnapping , picking up , torturing and finding of mutilated bodies of Baloch community , Sindhi Nationalists are continuing. Government of Nawaz Sharif is not taking it as serious issue. Wahid Baloch a harmless poet and writer was picked up by intelligence agencies on 26th July,2016 and then on 6 October,2016 Shabir Baloch a campaigner against CPEC and spokesman of BSO-Azad was also kidnapped by security forces. These two persons like other thousands of people from Baluchistan were not still produced in front of any court and no FIR has been registered against them. Such issues are not big issues in eye of Liberal God of Najam Sethi and others.

Hafiz Saeed is roaming freely, his JUD and welfare projects for recruiting more and more young person for waging so called Jihad in Afghanistan and Kashmir are growing , Jaish-i-Muhammad is fully active and its Jihadi Guys are making Jihad not only in Kashmir but they are busy in cleansing Shiite, Ahmadis, Hindus, Christians and Sufi Sunnis. Every move made in UN to declare them terrorists was deflected with help of China (Who used veto power against such move in UN Security Council). Banned (In papers only) ASWJ and Deobandi seminaries under its control are freely disseminating Takfirist Ideology among young Deobandi all over the county. Shiite professionals are being targeting to death and their religious freedom is in under attacks by Takfirist Deobandis. These are not big issues require strong actions from government side.

In fact actions taken by provincials and district administrations against Shiite community show that big Issue is religio-cultural duties of Shiite and Sufi Sunni communities during Ashura. FIR are being registered against those people who organize mourning meeting for martyrs of Karbala and against those who were organizing traditional mourning processions in their areas from before partition but their mourning meetings and processions are not registered. Fact is that local administrations are not ready to register these mourning meetings and not issuing licenses to these traditional processions.

You are not allowed to hoist black and red flags of Ghazi Abbas (Martyr brother of Imam Hussain in Karbla) on roads and you cannot allowed to make a walk along with such flag toward Imambargah without permission of local authorities. And such permission is now just dream because this is not granted due to objections and threat of creating chaos by Deobandi Takfirist. It means your religious freedom is bounded now with consent of Takfirist. Such liberalism is on rise in Pakistan and Nawaz Sharif is dynamic force of such liberalism.

God of Commercial Liberal Mafia Collapsed In front of Bootwals