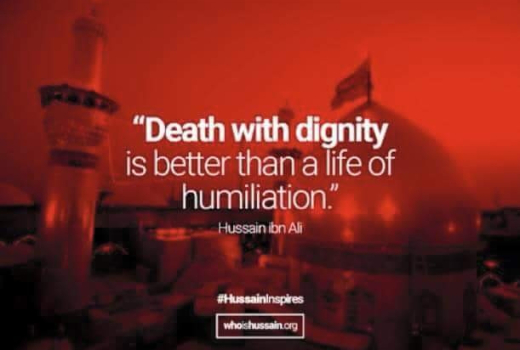 This process fully groomed in Pakistan during Zia era and now a powerful lobby in corridors of Pakistani state institutions and mainstream Pakistani media outlets directly or indirectly supports this mono-culture. A new powerful medium social media introduced some new initiatives to develop more this process in Pakistan particularly. Radicalized Deobandism with massive funding from gulf states and with oxygen from still ongoing policy of strategic depth policy of military establishment is targeting all those communities who are inclined more to composite culture and oppose mono-culture.

Culture of Ashura is also target of radicalized Deobandism not only in Pakistan but all over the world. But here in Pakistan not only open sectarian, Radical Deobandi Takfirist clergy is targeting culture of Ashura but many Deobandis having secular, liberal , left masks on their faces are excluding Ashura and its rituals from composite culture of Indian subcontinent. Hindus , Christians, Sikhs, Sufi Sunnis of Indian subcontinent have no problems with Ashura and its cultural components, These communities not only respect Ashura but participating fully to commemorate this culture in memory of martyrs of Karbala.

Sufi Sunnis of Indian Subcontinent think that there is no danger or threat for Islam in commemorating Ashura but this is Deobandism and Salafism funded by Saudis which is crying that Islam is in danger due to culture of Ashura. On other side Takfirists disguised in masks of Atheism, secularism, liberalism or Marxism says that culture of Ashura is hurdle in enlightenment of Pakistani society and Muslim communities.

They do not find any enlightenment, progressiveness, and revolutionary germs in tragedy of Karbala. Some contemporary Marxists or liberals think that to commemorate culture of Ashura is fall in well of retrogressive, sectarian ideology but they have no answer, when we tell them attitude of many renowned Marxists and very enlightened personalities toward Ashura and its cultural soul. From Josh , Firaq to Faiz Ahmad Faiz and then from Sajjad Zaheer to Kaifi Azami there was not a single progressive, enlightened literary person denying importance of culture of Ashura and they all see this a healthy and pro-people activity. They took it as metaphor of revolution, revolt against suppression and exploitation. They never think it as alien component for their cultural tendency. Ashura is part of composite culture of our society.

The society in India has had the most dramatic impact due to the commemoration of Imam Husayn’s sacrifice every year. The majority of the population in India is non-Muslim. It is curious to see those non-Muslims participating in the many colorful ceremonies during the month of Muharram. Also, it has affected the rich and the poor alike.

The most famous of them all was the Rajah of Gwalior, a state in central India. The Rajah used to go barefoot with the procession every year on the day of Ashoora, holding a replica of Imam Husayn’s mausoleum.

The following new-item was published recently on the INTERNET:

By Sanjay Sharma in Bhopal Hindu families have been taking out the Tazia procession on Muharram for more than 120 years in some districts of Madhya Pradesh. The ritual began in 1882 when the Raikwar family of the Vidisha town began preparing and taking out Tazias on the ninth day of Moharram. Since then, the Raikwar’s Tazia leads the procession of mourners on Muharram, and moves ahead of the long line of replicas of Hussain’s tomb and flags along the streets. Like several Muslim families across the globe, the Raikwar family members, too, set aside their daily chores to grieve for the grandson of Prophet Mohammad, Hussain, and his 70 companions who were brutally killed on the banks of the river Euphrates in Karbala (Iraq) in AD 680. “Hussain is everybody’s hero, the embodiment of virtues of piety, courage and self-sacrifice. He did not seek power.

“He represented the authentic voice of Islam and, for that reason, boldly challenged the un-Islamic practices of the Umayyad ruler, Yezid,” a member of the Raikwar family said. They also march, as they do year after year, through the lanes and by-lanes in fervent lamentation chanting, “Ya-Hussain, Ya-Husain”, rhythmically beating their chests, self-flagellating, carrying replicas of Husain’s tomb. “Hussain laid down his life but did not compromise with a bloody-minded tyrant,” says the head of the Mishra family of Sehore, another Madhya Pradesh town where a Hindu family takes out the Tazia procession. “The practice is over 100 years old for our family. We have also secured a place for `Bade Baba Sahib’ in our house where hundreds of Hindus and Muslims visit during Muharram to seek Husain’s intercession to cure the diseased, avert calamities and even procure children,” says Dinesh Chandra Mishra, present head of the family. “Every age brings forth a new Yezid, but resistance to tyranny, as is illustrated by Husain’s legendary example, is incumbent upon every man of faith”, he says.

Syed Husain Ali Jaffri, who has been a visiting zakir during Muharram in Kashmir, writes that there is a Brahmin tribe by the name of Mohyals who take part in Muharram observance with great devotion and fervor. They believe that their ancestors fought with Imam Husayn at Karbala and later, avenged Imam Husayn’s killing by fighting the Umayyads. There is historical evidence that Mohyals travelled back to India over the centuries via Afghanistan. A branch of Mohyals ruled in Afghanistan during the period 860-950 A.D. The Mohyals in Afghanistan are called Diwans. As a tradition, Sayyids (the descendants of Imams Hasan and Husayn) have great respect for the Mohyals of Kashmir and vice-versa.

Muslims generally abstain from any merry-making during the months of Muharram and Safar, which are the official months of mourning. The mourning ends on the day of Arba’een, or the fortieth day after Ashoora.

EFFECTS ON LANGUAGE AND LITERATURE

Hundreds of thousands of verses have been composed in a number of languages, describing the various episodes at Karbala and eulogizing Husayn.

Both Rawzeh Khwani in Iran and Iraq and Majlis and Zakiree in India and Pakistan gave rise to new standards of scholarship in the study of the religion. Thousands of books have been written.

In the middle of the nineteenth century, a new development took place in the cultural and literary circles of India. A yet-unimportant and not-so-popular form of poetry came into extensive use. This was MARTHIA, in Urdu. Marthia is a collection of sestets (stanzas of six lines each with the rhyming patters – aaaacc). It consists of full historical accounts of actual episodes at various occasions, mainly Karbala. The striking feature of this institution was the recitation, which was done with extensive imagery and acting in front of the Majlis. This created the actual scenes in the minds of the audience and thus enhanced the beauty of the poetry.

Mir Babar Ali Anees was one such poet. He was born in Lucknow, in the northern province of India, in or about the year 1805. The genius of his poetry lies in the fact that he has described the historical facts with unparalleled accuracy for a poet, and still maintained the poetical beauty and mastery of language.

( Efforts have been made in translating Anees’s poetry into English. Two significant names come to mind: S.M.Amir Imam of Mamoodabad, and Professor David Matthews of the School Of African And Oriental Studies, London. Matthews has translated the famous marthiyya of Anees which begins – JAB QATA KI MUSAFAT-E-SHAB AFTAAB NE. Matthews has maintained the rhyming pattern of ababcc, in his translation. The work has been published in India by Rupa & Co., Delhi, 1994, under the title:THE BATTLE OF KARBALA.

The problem with this task is this. Anees’ poetry is that of emotions, sentiments, feelings and states of mind. While it is easy to translate ideas and notions from one language to another, it is very difficult to transform feelings and state of mind from one language to another, because these are closely associated with culture and civilization which create a unique temperament for each language.)

Anees composed about 200,000 lines of verse during his life-time. In one of his marthias, he is describing the scene of the morning of Ashoora, where Husayn’s son Ali is reciting the AZAN for morning prayers. The metaphor he has used is: It was a nightingale singing in the garden of Apostleship.

We give below that one stanza in its original and Matthews’ translation:

He reads from the Qur’an; what majesty!

His grandsire once for speaking held the prize.

Ah, may his voice remain eternally!

The strains of David, who was called the wise!

A nightingale chirps in the Prophet’s bower!

In another marthia, Anees describes the desperate battle fought by Abbas, when both his arms have been severed and he is holding the water-skin between his teeth, warding off the arrows. The simile he has used is that of a lion holding its prey in its jaws. The true beauty of this similitude goes beyond the apparent similarity of the two situations. The lion is known as the king of the jungle. No other measly beast dares come near it. But there is one animal which can actually kill the lion. It is the wild

dog, which follows a lion in packs from a distance, until the lion has caught its prey. And then the whole pack attacks the lion trying to snatch the prey away. The lion is so proud that it does not want to let its prey go and also, because it is holding the prey in the jaws, it has lost the most effective weapon to ward off the wild bunch. The wild dogs attack the lion from all sides and eventually kill it. The simile of a proud lion holding its prey with the wounded Abbas is perfect in that he was trying to save the water-skin from the arrows of the enemy soldiers and eventually gave his life for it. Similarly, equating the enemy soldiers with a bunch of wild dogs shows implicitly, their mean, greedy and vicious nature and it also shows how contemptible they are held in Anees’s view. The beauty of the simile is further enhanced when we consider the fact that the word ‘Abbas ‘ in Arabic means `an angry lion’.

This article was taken from:

Culture of Ashura is part of Composite Culture of Indian Subcontinent