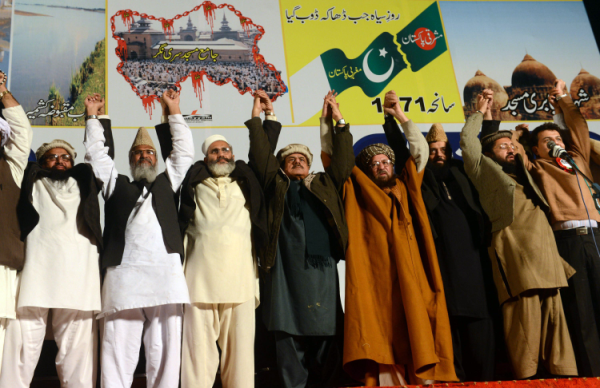 For years I was unable to solve a riddle. It was so hard that I would spend nights thinking about this puzzle and torment myself about it is possible. From my college days when question of God and religion used to be hotly discussed topic and when a lot of bright minded young friends who would be well-read of most of the philosophy and literature about religion and atheism to the age of social media where I would see middle aged ‘successful’ men/women turning to secularism/atheism instead of Islamism, I always noticed this pattern and could never find the reason.

So fast rewind to 90’s here is young bright youth a Marxist discussing Voltaire and his atheism, enthusiastically ripping apart the stupid arguments of religious discourse, condemning in harshest terms the socio economic impact of religious bigotry. Which all made sense to me, in fact I myself would contribute my bit in this discussion. And while we are talking how Islamists terrorists have spread terrorism in Afghanistan and elsewhere in the world, how the slaughter men and women in the name of religion and how their ideology could bring the downfall of the human civilization, my good friend will all of a sudden point out how ridiculous these Hindus are drinking cow’s pee and having such disgusting rituals. I would be dumb founded and would not understand that how slitting the neck of a human by the Islamists be compared to drinking cow’s urine. But then I won’t be able to refute him either that such rituals are probably laughable.

Let’s fast forward to this age, age of internet, Facebook and twitter. Where you will find hundreds of seemingly reasonable seculars/atheist. Here is a lady, declaring herself atheist or secular, posting pictures/videos, condemning in harshest terms the Islamism. They will be posting the images of women being beaten by Mullas, kids being trained as suicide bombers and condemning them in harshest possible terms and then all of a sudden you will see an image of Ahmedi Khalifa giving sermon to his followers and they will condemn in the same words that how these mullas have groomed cults around themselves. And how condemnable such Muslims are.

One more example here is a social media activist talking about everything on earth, making most sense. Condemning Taliban in Afghanistan, ISIS in Iraq/Syria, brutality of Islamists in Pakistan. Declaring himself atheist, talking about follies of the religion. And then he would condemn in the same words that how these stupid bralevis go to Shrines are perform such disgusting rituals.