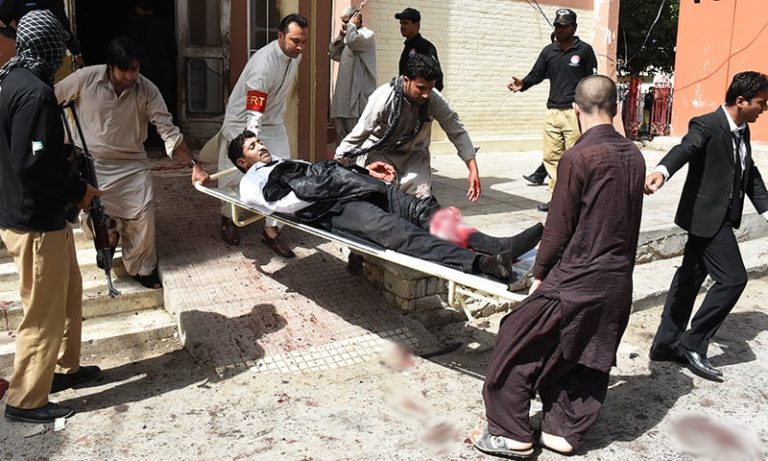 Here is a typical synopsis of an average size bomb blast in Pakistan.

Blast (obviously), splash of blood, loud cries and wailing, charred bodies, tears, condemnation hurricane from anybody above grade-17, volley of sweeping statements within first hour after the blast, without any investigation implicating every hostile spy agency like RAW, MOSAD, CIA, Black Water, ‘Breaking News’ breaks that the higher ups have ordered to intensify operations against anti-state element, few mourning songs, followed by more patriotic songs and finally announcement of cash disbursement for the bereaved families and the injured. That is all! Few days later in the national media it seems like nothing had happened until a new blast rips apart some more. This loop executes again and again.

Yes, it seems very heartless, to talk in the mocking tone and apparently acting as ‘not a big deal’ while real humans who had families got killed. Indeed, this is not how it should be spoken or depicted, but honestly how else, it should be described? If a lot of anger or disgust is shown, would that help the matters? Or if a lot of cold facts and statistics is provided accompanied by a ‘super-cool’ analysis, would that serve any insurance that no further blood-shed would happen? Answer, is certainly, no.

The deceased when given the title of ‘Shaheed’ by the media or by any government dignitary, doesn’t come back. Their grieving families find no solace when this title is told to them. They miss their loved ones. The loved ones, who left their home to earn something for the family and not to get Shahadat. This tradition serves as the catharsis which diffuses the anger for their killers. Without getting into the religious interpretation, let people know that their dead were killed by the heartless people and channelize their energy in getting to lodge protest with the state and demand the justice for their loved-ones.

The other most disturbing fact after every episode of carnage is to shift the blame to imaginary enemies. The enemies that you cannot apprehend right away. How on the earth it is established by the media or by the others within first hour, without investigation that the responsibility lies with any foreign spy agency, mostly Indian RAW. If we are this efficient and true to our word, why foreign office doesn’t summon the envoy of that country and lodge a protest? Because if that is true, then PM should come on national TV and issue direct warning to that country. The COAS should mobilize the troops to the border and reflect a real show of force to that hostile neighbor. That would do the trick and might deter the enemy. But the issue here is that this blame game is ensued to direct the anger to an unattainable culprit and thus getting ourselves absolved of any responsibility. Until this practice of blaming somebody outside the borders is not shun, we would never be able to fight this menace of terrorism.

It is a reality that every Pakistani knows, who has been carrying all these crime against humanity. We know them, they accept the responsibility but somehow it has become a tradition to overlook the real and apparent enemy, who is shouting at the top of its lungs “It is me”, but we say, “No it is not you”. What does that mean? It is not the the first event of this type happened. Since 2007 we have been told that behind every bomb blast the infamous Black Water was involved. On the national TV the apologist for the extremist mindset has been misleading the public with this fancy name. And when a serious military operation was initiated, it was against ‘our own’ people in FATA and Waziristan. When the terrorists were routed from those areas, a comparative calm could be felt. Now nobody talks about Black Water.

What happened, has Black Water been transported back to Nebraska or Oklahoma? Nothing of this sort happened. A total self deception. We don’t have to be genius to guess as who is doing it. It is the product of ill-conceived policies and ill-gotten ideology that is doing it. Go stand in-front of any hate-mongering or regular seminary, indulge into chat with the students there. You would be surprised to listen to the comments and after a while, if one is gullible enough, would return with a solid understanding that it was the victims of the blast who were at fault. The victims should have registered their-self for the Jihad instead of wearing black coat and tie.

Until state doesn’t abandon the policy of ‘good extremist’ vs ‘bad extremist’, this problem is not going to go away. Their is no such thing as good-fire and bad-fire, it burns and doesn’t discriminate the stuff it is burning. This whole scenario has gone so complex and their is so much contradiction in the state policies and its targets that state actors their-self are so confused as whom to wipe out and whom to spare!

If our state is smart enough to consider these confused policies are still the only way to go for a strong and prosperous Pakistan, may be they are right. But there is a visible disconnect here in the public and state interest then. May be public wouldn’t object to these policies, if it earns them security but basic issue here is that public is getting killed. Or for that matter, at least public should be informed as how much more it has to die before calm and peace is restored. At least set some expectations here, Please.

There have always been spells of public killing in the tormented Pakistan history of last 40 years. Initially bloodshed that would happen and public was told, it was happening because Pakistan is going after a great cause to liberate the Afghanistan. Then sectarian killings peaked and Taliban regime was the reason. The Taliban who otherwise were serving a great cause by offering strategic-depth to Pakistan. But they only had one ‘weakness’ of killing people of a particular sect. So public killing in that scenario was considered as a collateral. Then infamous War on Terror became the reason for a new type of butchery and public died in big numbers and in a new fashion – suicide bombing. Now a new reason has been crafted, CPEC. Now this road demands Pakistani blood. Which country in the world offers so much blood for the perceived grand and noble causes of the state? None.

The primary duty of the state is to protect its people. Sate is for the people and not otherwise. When public lives in fear what is the point of a state that apparently has the most lethal weaponry? It is high time to fix our priorities. We need some strong people in the foreign office who should pacify the neighbors, if we are convinced that it is the neighbors who are behind all this. Also the state seriously need to drop the extremist mind set as a tool of foreign policy. And public shouldn’t be considered as a disposable commodity. By having a population of 200 million shouldn’t be reflected that as we are too many so we can afford to loose some of it on regular basis. India and China has used their huge population as their strength, so we can also do the same, only if we think that public is important.