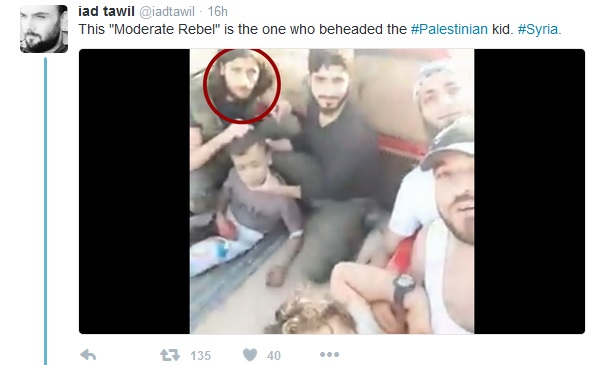 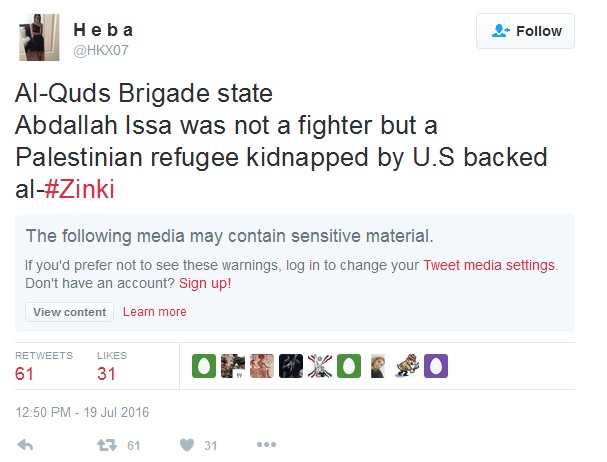 I don’t do this very often, but Americans really must see what we are paying for who we are arming, who we are training, and who we are calling our “moderate rebels” fighting for “freedom and democracy” in Syria.

The US sponsored Nour al-Din al-Zenki Movement just brutally beheaded a very young boy, between the ages of 10 and 13. And posted a “bragging” video of the horrific event.

This article is true you can read it and don’t have to watch the video unless you really feel you must. It is brutal beyond description. https://www.almasdarnews.com/…/aleppo-rebels-behead-a-child/

Here’s the background of this US backed, armed, funded “moderate rebel” group which I believe is quite accurate:

Harakat Nour al-Din al-Zenki (Arabic: حركة نور الدين الزنكي, Nour al-Din al-Zenki Movement) is an independent insurgent group involved in the Syrian Civil War. It is part of the Syrian Revolutionary Command Council and has received U.S.-made BGM-71 TOW anti-tank missiles.[8] As of 2014, it is reportedly one of the most important rebel factions in Aleppo.[9]

Nour al-Din al-Zenki was formed in late 2011 by Shaykh Tawfiq Shahabuddin in the Shaykh Salman area north-west of Aleppo. The group’s greatest concentration of fighters in the city of Aleppo are in its northwestern suburbs.[10] Nour al-Din al-Zenki took part in the initial battles that started the Battle of Aleppo in July 2012, capturing the Salaheddine neighborhood, although it soon withdrew to its heartland in the countryside.[11]

The group has gone through many affiliations since it was founded. It was initially a branch of the al-Fajr Movement, it went on to join the Tawhid Brigades during the attack on Aleppo, before withdrawing and allying with the Saudi-backed Authenticity and Development Front.[12] In January 2014, Nour al-Din al-Zenki was one of the founding factions in the anti-Islamic State of Iraq and the Levant umbrella group Army of Mujahedeen,[1] however in May 2014 it withdrew from the alliance and subsequently received increased financial support from Saudi Arabia, which had been reluctant to support the Army due to its links with the Syrian Muslim Brotherhood.[9] In December 2014, Nour al-Din al-Zenki joined the Levant Front, a broad coalition of Islamist rebel groups operating in Aleppo.[3]

The group has also received financial aid from the United States, in a CIA run program to support moderate rebel groups.[13]

On 6th May 2015, along with 13 other Aleppo-based groups, joined the Fatah Halab joint operations room[6]

On 19 October 2015, the commander of the group was killed during fighting with government forces near the Aleppo area.[14]

War crimes
According to the Amnesty International, Harakat Nour al-Din al-Zenki, along with the 16th Division, the Levant Front, Ahrar al-Sham, and the al-Nusra Front, has been involved in abduction and torture of journalists and humanitarian workers in rebel-held Aleppo during 2014 and 2015.[15]

On the 19th July 2016, al-Zenki fighters recorded themselves beheading a Palestinian child named Abdallah Issa who was aged between 10-13. They claimed he had been fighting for the Syrian government in Aleppo with Liwa al-Quds. [16][17] Liwa al-Quds refuted this and claimed the child was a Palestinian refugee who was kidnapped.[18]