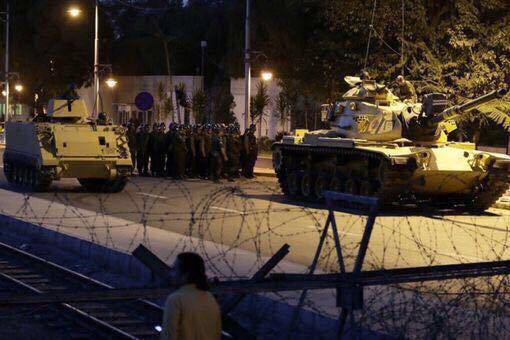 Erdogan is a Salafi Ikhwanist. He is at the centre of power for 14 years. He is wielding more autocratic powers with every day. He is as democrat as was Hitler when he won elections in Germany. Erdogan has his own mein Kampf, the Book, which he, believes in or not, uses it cleverly. To me this coup is a smoke screen of something more sinister cooking up.

His role in Syria and ISIS is shameful, relations with Europe treacherous, connections with the house of Saud lascivious, status of violation of Human Rights obnoxious, and aspirations to be the Muslim caliph ludicrous.

Turkey is almost 100% Muslim. That has still not stopped Erdogan from making vicious and bigoted remarks against the sizeable Turkish Alevi Shias. Remember this man with an Ikhwanist garb is in power for 14 years and grabbing more power unto himself every year. In 30 years you can wipe of the old generation and create a new indoctrinated generation. That’s what happened in Pakistan. Zia is still alive as his legacy of Deobandisation and Talibanisation is not dead or in retreat. Turkey is very modern & looks, smells, tastes and feel westernised. But what we see are the urban centres and the western attire and garb is not all. Inside many are Salafists and the blast of extremism is always a spark away in every believer. Please don’t forget that Kabul in the 1970s was very modern too.

The so called failed coup of 15 July 2016 reminds me of 27 February 1933, the ominous date Reichstag was burned. It gave the Nazis the moral vendetta to start the great purge against the communists and the liberal democrats, which culminated in the strengthening of the Nazi hold. I see uncanny similarities in the failed coup in Turkey. Power is a merciless game and Erdogan sitting at the fringes of mainland Europe is a grand master of the dirty political games.

merciless game and Erdogan sitting at the fringes of mainland Europe is a grand master of the dirty political games.