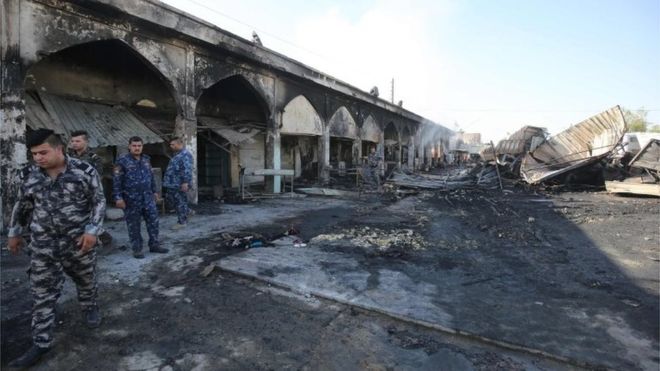 Suicide bombers and gunmen have killed at least 35 people in an attack by so-called Islamic State (IS) at a Shia shrine in the Iraqi town of Balad.

At least one bomber blew himself up outside the mausoleum of Sayid Mohammed bin Ali al-Hadi, which was then stormed by gunmen, reports say.

Another bomber is said to have blown himself up among fleeing worshippers.

Meanwhile the death toll from Sunday’s suicide bombing in Baghdad has again been raised, from 281 to 292.

IS said five of its members had carried out the raid on the site in Balad. The militant group follows an extreme form of Sunni Islam and often targets Shias, who it regards as apostates.

About 50 people were injured in the attack, police and medical sources said.

Worshippers were marking the Eid al-Fitr festival, celebrating the end of the Islamic holy month of Ramadan, when the site came under mortar fire.

The first bomber then struck a market at the entrance to the shrine.

A third bomber was shot dead before he was able to detonate his explosive vest, reports say.

It came four days after IS carried out the deadliest bombing in Baghdad, 45 miles (70km) south of Balad, since the 2003 US-led invasion.

That attack target a shopping complex in the mainly Shia Muslim district of Karrada.

IS militants overran large parts of northern and western Iraq two years ago, but government forces have since regained much of the territory.

In response to the battlefield setbacks, including the recent loss of the western city of Falluja, the militants have stepped up their attacks on civilians.

The Iraqi government has been accused of not doing enough to protect its citizens and has stepped-up security in Baghdad in response to the latest violence.