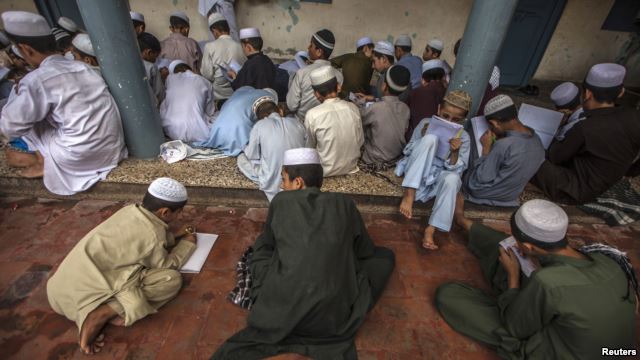 Weeks of scathing criticism have apparently prompted a provincial government in Pakistan to review a $3 million grant it recently allocated to a controversial Islamic seminary that some critics call the “University of Jihad.”

Haq’s madrasa, where about 4,000 students are enrolled, is widely known for links to, and publicly expressed sympathies for, the Taliban who are fighting local and U.S.-led international forces in Afghanistan. That association has won the Islamic cleric the title of “Father of the Taliban.”

The political party that rules the province is headed by legendary cricketer-turned politician Imran Khan, leader of the Pakistan Tehreek-e-Insaf (PTI) party, and a staunch critic of the U.S.-led anti-terror war in the region. Khan, a strong opponent of Prime Minister Nawaz Sharif, is popular among educated Pakistani youth.

While provincial ministers defend the financial grant as part of efforts to “mainstream” thousands of madrasas around the province, Khan has distanced himself from the decision, although he did reiterate his support for introducing reforms in religious institutions.

Speaking to VOA at his Bani Gala residence near Islamabad, Khan said he was unaware of the funding for Haqqania madrasa until the media drew his attention to it.

He said the provincial chief minister used his discretionary powers to allocate the funds without his knowledge and without informing some of his Cabinet ministers. But Khan says he has now instructed the provincial authority to submit a report to him to justify the allocation. Under Pakistan’s constitution, a party chief is empowered to do so and can dismiss a public office holder if he or she goes against party policy.

“The situation is evolving right now,” Khan said. “What we want the KP government to do now is to announce exactly how this money will be spent; how is it going to mainstream this madrasa, which is one of the main madrasas in KP, and we have been assured by the government that, in the next few days, they will give us the details about how specifically this money will be spent.”

Both Mullah Omar and Jalaluddin Haqqani — founders of Afghanistan’s Islamist Taliban and the lethal Haqqani network respectively — are believed to have studied in the Haqqania madrasa. Taliban leader Mullah Akthar Mansoor, who was killed in a U.S. drone strike in May, may also have been a former student.

The Haqqania madrasa was one of the seminaries Pakistani and U.S. intelligence agencies used to recruit fighters for the jihad against the Soviet occupation of Afghanistan in the 1980s.

A large number of seminary graduates have also joined Taliban ranks fighting the U.S.-led international forces and their local allies in Afghanistan.

Many politicians question why so much money is being given to the seminary while more moderate institutions are not receiving similar funding. FILE– Sami-ul-Haq, center in grey turban, a Pakistani Islamist politician and head of the Islamic seminary Darul Uloom Haqqania, is surrounded by students as he leaves after delivering a lecture at his seminary in Akora Khatak, Pakistan.

Khan stopped short of saying he might instruct the provincial government to cancel the funding for the seminary in the wake of growing criticism from political opponents, media commentators and civil society activists.

Khan pointed out that there are about 2.2 million students in madrasas across the province who come from families that are unable to pay fees in private or government schools, so there is a need to teach them modern subjects to enable them to get jobs.

“Our main concern is that we should be bringing these people into [the] mainstream, and so that they become part of the society,” he said.  “Marginalization everywhere in the world, now we know, leads to radicalization. The ISIS [or Islamic State] has mainly got recruits from Muslim communities living in Europe who are marginalized.”

Political analyst and author Zahid Hussain views the seminary funding as politically motivated, but warns such actions could undermine Pakistan’s successes against religious extremism and terrorism.

“Such a move could reverse the gains that have been made so far in fighting militancy and extremism,” Hussain wrote in the daily Dawn. “It is simply a political bribe and nothing to do with any professed effort to de-radicalize religious seminaries and bring them into the mainstream. In fact, favoring one group of a particular sect could encourage bigotry and fuel religious disharmony.”

Religious parties have traditionally struggled in national elections in Pakistan, hardly winning more than a few seats in parliament.

However, in conservative regions like Khyber Pakhtunkhwa, religious conservatives still influence regional politics, preventing Khan’s party from winning an outright majority in the provincial assembly. He relies on support from an Islamic fundamentalist party to run the coalition government there.