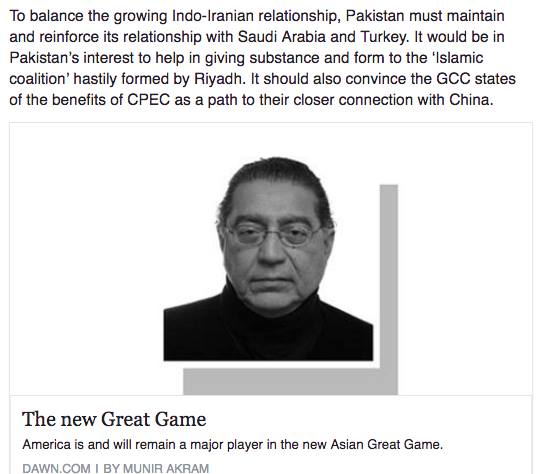 Islamabad diplomats and security experts are not only a funny, but an astonishingly ignorant lot; uninformed, pompous, and lacking as much intelligence as integrity. Pick any washed up diplomat or a so-called security expert – you’ll find them ossified in the same mold. With a repertoire of trite words, clichéd jargon, and nauseating predilection for conspiracy theories, their careers firmly match the degree of their anti-India bile and vitriol – their only expertise which they use to conceal their incompetence and deceive Pakistan’s military establishment.

Case in point: Munir Akram; more infamous in New York for violently assaulting his girlfriend Marijana Mihic than famous for any diplomatic honor, Akram was finally sacked as Pakistan’s UN Envoy by President Asif Ali Zardari because of his refusal to present Benazir Bhutto’s assassination case to the UN.

An abusive boyfriend at 57 to girlfriend 22 years his junior; a blue-eyed puppy of Saudi Arabia and Deobandi circles in Pakistan’s establishment; a UN Envoy who’d refuse to present the assassination case of Pakistan’s two-time Prime Minister to the UN; and a UN Envoy who would have been arrested if it were not for his Saudi and Deobandi backers in Pakistan’s establishment – the State Department had formally requested for his immunity to be lifted so that he could be tried as a serial violent abuser. He was eventually relegated as ineffective at the UN and managed nothing in the final 5 years of his stay due to the reputation he had acquired.

This is the profile of the diplomat who now routinely writes for Pakistan’s ostensibly esteemed English daily Dawn! The same person threatens Afghanistan and India; wants Pakistan to further suck up to Saudi Arabia and become a partner in crime in Yemen; wants to spoil Pakistan’s relations with Iran; and exhorts Pakistan to join hands with Erdogan in supporting ISIS. With such profile and views if Munir Akram is still a diplomat, Trump would be a Gandhian.

In his article published in Dawn (June 12), Munir Akram – putatively a diplomat – threatens India in the following words: ‘Indian shipping lanes to Chabahar will be vulnerable to disruption’; he then portends a dark future for Afghanistan in a threatening tone, and asks Pakistan to join the sectarian coalition led by Saudi Arabia, and forcefully deal with enemies of CPEC. One is forced to question what exactly this mentally ill, perverted, serial abuser of women wants. Do his misogyny, abusive behavior and insecure masculinity also reflect in his ludicrous security assessments? But the more important question is whether or not such a mentally ill person be allowed to advise on sensitive matters related to foreign policy and security.

Pakistan faces uphill challenges today and it is because of similarly delusional people – in whatever roles they’ve been working – that Pakistan finds itself in the present quagmire. Yes, CPEC might as well be the last boat for Pakistan’s development, but CPEC alone will be insufficient if the state doesn’t adopt a cooperative attitude towards its neighbors. Even if the country has to lay low internationally and only focus domestically on its future, it might as well be worth the hibernation.