Home  »  Newspaper Articles   »   Why is the banned Takfiri Deobandi group ASWJ being allowed to organise a public event in Khairpur? 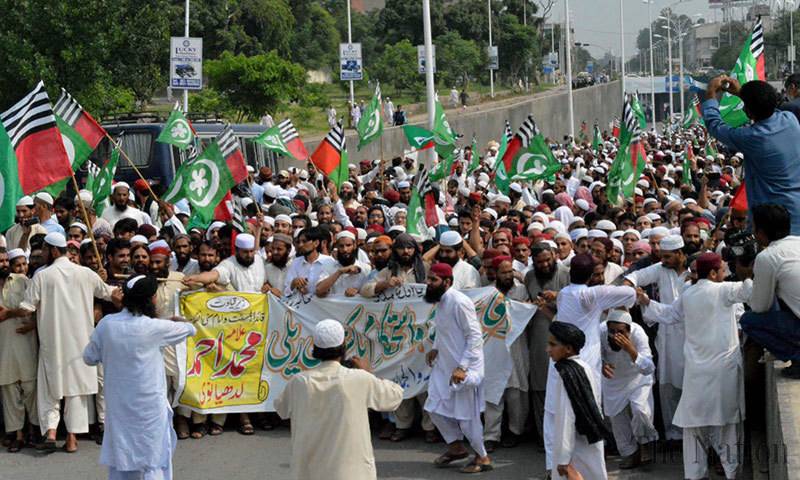 We, as a nation, have witnessed so many ups and downs. We have had a long history of tumult and sufferings. The story began right after Partition in 1947, from the war of 1965 to the painful defeat in 1971, all these historical tragedies culminated into an emotional national unity amidst irregular progresses.

When any threat is directed – particularly by the non-state actors – towards the national integrity and wellbeing of our country, a sudden and unprecedented wave of national unity and patriotism emerges, followed by temporary progress. We also witness some demonstration of conscientiousness and responsibility from the politicians.

Something similar was witnessed after the Peshawar APS attack. The whole nation was moved and in shock over a cowardly terror attack on innocent children. The attack was claimed to be a direct response to the Pakistani Army’s operation against the jihadist terrorists.

Pakistanis were infuriated by this attack, which was followed by multiple ‘action-reaction’ sequences.

As a consequence, many people came under attack, religious seminaries were questioned, the distinction between ‘Good’ and ‘Bad’ Taliban was obliterated and tempestuous demands were made to rescind the moratorium on death penalty. Military courts were established in utter urgency for ‘expeditious’ dispensation of ‘justice’.

Many right-wing religious groups including Takfiri Deobandi ASWJ (Ahl-e-Sunnat Wal Jamaat) were banned and barred from functioning openly. National Action Plan (NAP) was formed and was imposed at the national level with the consent of all the provinces and political parties.

Civil society activists, lawyers, journalists, politicians and other concerned citizens came out against religious extremism; but this was again a usual ‘fanciful temporary progress’ that didn’t last for long. We need not to forget our history. Our present is a by-product of our past. Everybody knows that these are the repercussions of attempts at Islamization, both on state and societal level.

All attempts to Islamize the country eventually led to extreme sectarianism and religious terrorism. Laws inspired by religious interpretations are still under debate and have flaws that impede any smooth functioning.

On the societal level, this has produced extremists who seek credence for their crimes from such flawed laws and on a state level, it has escalated even to a more serious level: infiltration of militants in the Army and other state institutions and agencies. This is also one of the main reasons why efforts to eradicate terrorism have miserably failed, since there is no consensus in any real sense. The society still remains a victim of past’s Islamization and is still confused about which trajectory to choose, since their personal beliefs are calling for ‘truth’ and the state is merely a ‘worldly’ matter. One ongoing example and result of this contradiction and duplicity can clearly be seen in the hometown of Sindh’s CM Qaim Ali Shah, Khairpur, where ASWJ is planning to hold a public event in the Madrassa Jamia Anwaar ul Huda Haidria with the full permission of SSP and other local authorities.

ASWJ is known for its speeches and fatwas that seek to galvanize sectarian and takfiri violence in the country. To put it simply, it is among the perpetrators of Shia genocide.

SSP Sukkur, Pir Muhammad Shah shocked me when he admitted that he himself gave the permission to the head of ASWJ Khairpur, Syed Pir Bukhari Shah. “Please try to understand that ASWJ is for Difah-e-Sahaba and has been operating in Pakistan since 1980s” he said much to my astonishment.

He said that this is a religious event and thus has full freedom. “After all it’s about Difah-e-Sahaba,” he claimed.

“This is a regular Annual Difa-e-Sahaba and Dastar-e-Fazeelat Conference (Khatam Bukhari Shareef) held every year since 1995 in the month of Shaban within the premises of Madrassa Jamia Anwaar ul Huda Haidria Khairpur, wherein about 10,000 to 15000 men, students, religious scholars and leaders from across the country participate,” he further clarified.

According to him prominent leaders Molana Ahmad Ludhyanvi from Punjab and Molana Aurangzeb Farooqi from Karachi will be attending the event. He told me that everybody in the city knows about this event and ‘it’s not anything new’.

I tried to speak to the organizers of this event to reconfirm whether it is true or just a rumour. One of the organizers said, “We will certainly do this event and we have the full support from our local authorities. I have talked to SSP Pir Muhammad Shah and we need not worry about security because CM Sindh Qaim Ali Shah is our MPA and he knows this all very well.”

ASP Imran Khokhar said the event has been organized by the Head of the ASWJ Khairpur and everybody is ready for it.

ASWJ was banned by National Counter Terrorism Authority’s (NACTA) and allowing it to hold public events is a direct violation of National Action Plan’s points 5, 7, 9, 11, 14 and 18.

Civil society activists like Shaan Taseer and Muhammad Jibran Nasir have also strongly condemned ASWJ’s activities. They have initiated a campaign against this public event which violates the National Action Plan.

“How dare he (SSP Pir Muhammad Shah) permit and justify a conference that promotes genocide on the grounds that it agrees with his personal religious views? Is this the duty of our law enforcement agencies; to defend (as they imagine) the “sahaba”? Do they not have a duty to, first and foremost, defend the citizens of Pakistan?” asked Shaan Taseer. Shaan has also written open letters to CM Sindh Qaim Ali Shah and Chairmain of PPP Bilawal Bhutto Zardari.

It is incumbent upon every concerned and conscientious citizen to take stringent action against this. Allowing such groups to operate and function openly is akin to mocking anti-terrorism laws and policies. Embarking on two trajectories simultaneously is not possible and will ultimately culminate in an extreme tumult and bedlam in the society.

The state and government should be clear and impose an immediate uniformity in all its ‘hierarchy’ to make sure there is no infiltration of extremist elements. Such irresponsibility can endanger lives of innocent minorities. We need to eradicate this confusion.