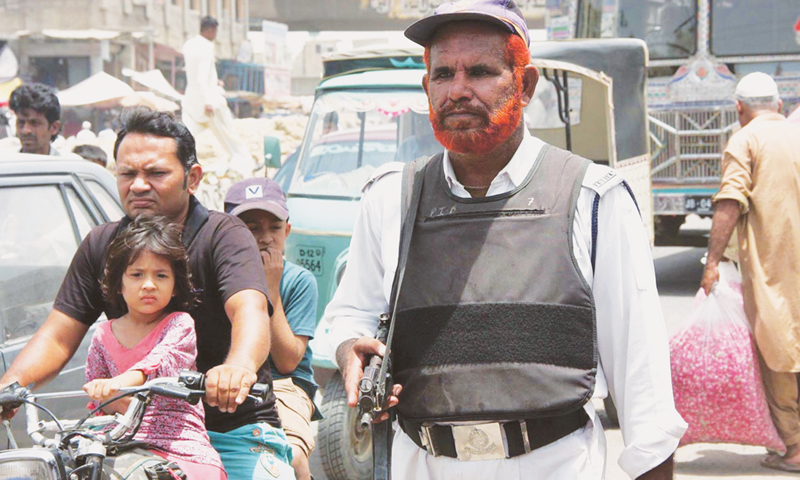 KARACHI: The police investigation into the targeted killing of two traffic police constables at Ayesha Manzil in Azizabad on Saturday is focused on the same banned militant outfits that were involved in the killing of six traffic policemen last year, officials said on Sunday.

The police counterterrorism department registered an FIR against unidentified gunmen under Sections 302 (premeditated murder) and 34 (common intention) of the Pakistan Penal Code and Section 7 of the Anti-Terrorism Act, 1997 on a complaint of the Azizabad traffic section officer.

Karachi-West Zone police DIG Feroze Shah told Dawn that initially they were focusing on the possible involvement of the same militant group that killed six traffic policemen and wounded four others last year.

The DIG said two suspects allegedly involved in the 2015 killing had recently been arrested in central district and they belonged to the banned Lashkar-i-Jhangvi while their four accomplices were absconding.

Replying to a question, the DIG said the suspects told the interrogators that they had been targeting law enforcement personnel in a ‘reaction’ to the killing of their leader Malik Ishaq and others in Punjab. The Lashkar-i-Jhangvi chief with 13 others, including his two sons, was killed in Muzaffargarh in July 2015.

The DIG said that following the killing of the traffic constables, the police had launched targeted actions in surrounding areas of Azizabad and detained 14 people for questioning, but 10 of them were released while the others were being interrogated.

The officer did not disclose the identity and possible affiliation of the held suspects with any group.

Meanwhile funeral prayers of the slain traffic policemen Mohammed Akram and Shakeel Ahmed were held at the police headquarters in Garden. Sindh police IG A. D. Khowaja expressed his sympathy with the relatives of the slain policemen.

The IG police and Rangers DG Maj Gen Bilal Akbar also held a meeting at the office of the DIG-South, which was attended by senior officials.

The participants decided to enhance intelligence sharing and accelerate joint operation against militants and criminals.