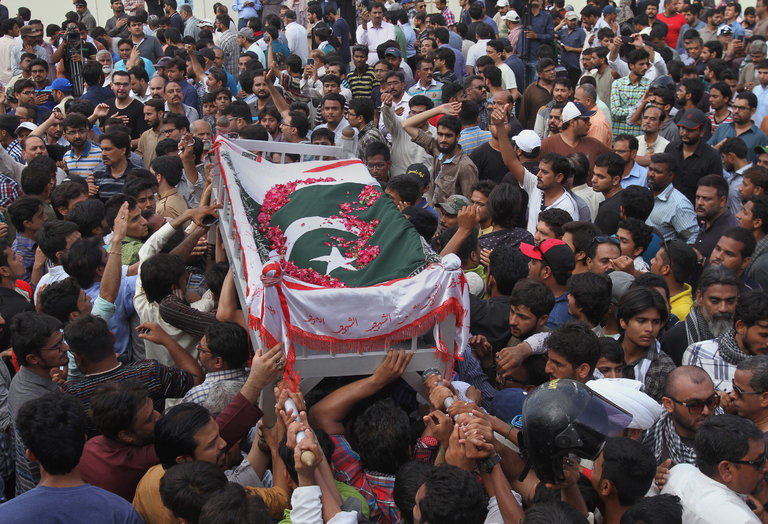 It did not matter as to whether khuram Zaki was a Shia or Sunni, what did matter the most, though, is that the blood of a honest and honorable human did spill on the land of the Pak (Clean). So has been the sad state of affairs in Pakistan, that prides in calling itself an Islamic State, and yet permits the most gruesome goons of sipaha-e-Sahaba or Lashkar-e-Jhangavi gun down an innocent Momin because he was a Shia, and an activist who was trying to right an endless wrong. His bludgeoned body was laid to rest as he joined the list of countless victims, who have given their lives for the cause of truth and Justice.

Hussain Ibn Ali (AS), the foremost myryr of this universe did set an example, never to be repeated again, when he sacrificed his own life along with the lives of his family members and his companions for the sake of reforming the Ummah of his grandfather, the Prophet of Islam (PBUH), while upholding and protecting the very sanctity of the faith, that was about to be decimated and desecrated by the people of the Ummayya tribe. Indeed individuals such as Khuram Zaki were the followers of Aba Abdullah al-Hussain and his unprecedented sacrifice, known as “Zibha Azeem”.

Neither a word of condemnation is in order, nor the supporters of Shaheed Khuram Zaki should start beating their chests, because such acts are reserved only for the sorrowful sissies. The Quranic doctrine of Qisas must be applied in this case and the cruel and criminal gangs of Wahhabi and Salafi cabal, who are so brazenly being financed by the Saudi, Bahraini and Qatari states of the Gulf, must be brought to the task for fomenting acts of terror and tyranny. Should the law enforcement apparatus of the State fails to capture the culprits, the champions of humanity and fairness must take matters in their own hands, ensuring that not a single drop of blood belonging to the innocent citizenery is lost.

KARACHI, Pakistan — Unidentified gunmen have killed a Pakistani rights activist known for campaigning against both religious extremism and the head cleric of a radical Sunni mosque, police officials said.

There was no immediate claim of responsibility.

This was the third high-profile killing of a rights activist in Karachi since 2013 and pointed to the immense dangers faced by activists in a country troubled by religious extremism and intolerance. Last year, Sabeen Mahmud, the director of a popular arts center in Karachi, was gunned down in the city after she hosted an event on human rights abuses in southwestern Baluchistan Province. Parween Rahman, a social justice activist, was killed in 2013. A suspect in her killing, Raheem Swati, was arrested in Karachi on Saturday.

Mr. Zaki, 40, a blogger, rose to prominence after he campaigned with other activists against Maulana Abdul Aziz, the head cleric of the Red Mosque, a bastion of Sunni extremists in Islamabad that was the scene of a military operation in 2007.

After Mr. Aziz refused to condemn the killings of schoolchildren in an attack in Peshawar in 2014, rights activists gathered outside the mosque and demanded his arrest.

Apart from his opposition to Mr. Aziz, Mr. Zaki, a Shiite, had also campaigned against Sunni extremists in Karachi, particularly against the banned extremist group Sipah-e-Sahaba Pakistan.

In a post on Sunday on Let Us Build Pakistan, a blog where Mr. Zaki was an editor, Ali Abbas Taj, the editor in chief, said Mr. Zaki had been killed because of his unwavering campaign against the Taliban and their Sunni extremist allies. The Pakistani authorities have occasionally blocked the blog because of its staunch pro-Shiite content.

Mr. Zaki’s death is a grim reminder, Mr. Taj wrote, that whoever raises a voice against Sunni extremists will not be spared. “As and when they have to murder, they never fail,” he said.

Funeral prayers for Mr. Zaki were said on Sunday afternoon, and members of his family and protesters staged a demonstration outside the chief minister’s residence in Karachi, urging the government to bring the culprits to justice.

“Zaki was running a campaign against religious intolerance and social injustice on social media by peaceful protests,” said Asad Iqbal Butt of the Human Rights Commission of Pakistan, an independent rights group.

Mr. Butt said militant groups had started singling out activists who had been campaigning on social media against injustice and religious intolerance.

Raza Rumi, a Pakistani political analyst and activist who moved to the United States after an assassination attempt in 2014, said the murder had sent a chilling message.

“Being an activist in Pakistan is highly risky, as the state has yet to eliminate the sectarian militias that kill with impunity,” he said.