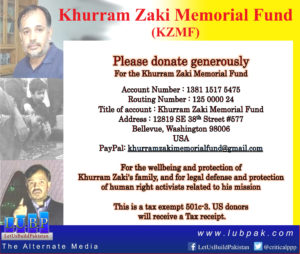 Khurram Zaki was martyred because of his bold and principled stance for the rights of Pakistan’s diverse faith and ethnic groups including Sunni Sufis, Shias, Barelvis, Ahmadis, Christians and Hindus who are facing systematic violence at the hands of Takfiri Deobandi militants variously known as the Sipah-e-Sahaba Pakistan (ASWJ aka LeJ), Taliban (TTP) and some Takfiri sections within Jamaat-e-Islami.

He was an ardent supporter of Pakistan army’s operation against Takfiri terrorists and wanted this operation to also include the banned terror outfit ASWJ in urban areas which is nothing but another avatar of LeJ, TTP and other enemies of Pakistan.

While Khurram Zaki has sacrificed his life in building a peaceful and tolerant Pakistan, it is our ethical and national duty to ensure wellbeing of his children and widow, providing decent education and livelihood to them.

For that purpose, the Interfaith Unity for Tolerance (IFUT), a charity registered in the US, has set up Khurram Zaki Memorial Fund (KZMF) with the following aim:

1. To provide educational and household support to the family of Khurram Zaki;
2. To support families, in particular school going children, of all activists, journalists and writers killed by Takfiri Deobandi militants. This support will be provided to Pakistanis of all faiths and ethnicities who categorically condemned Takfiri Deobandi militancy in their writing and activism.

The Interfaith Unity for Tolerance (IFUT) will be the custodian for KZMF.

Once Shaheed Khurram Zaki’s family is taken care of, the funds will then be utilized for the families of other activists martyred by Deobandi militants.

An independent audit of the account will be conducted and published on an annual basis.

In wire instructions should include FBO Khurram Zaki Memorial Fund. Tax receipts will be provided.