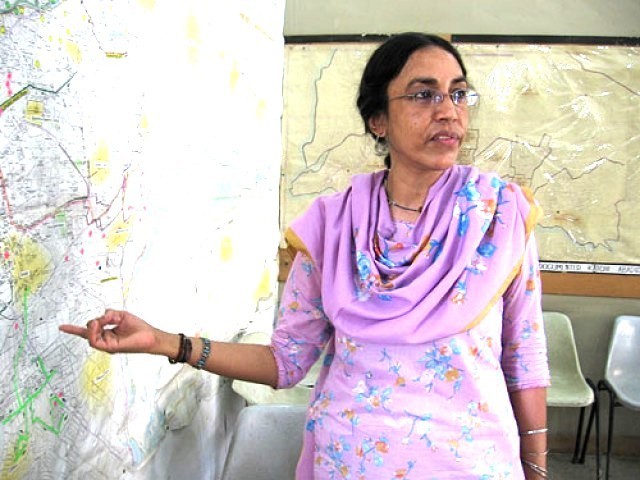 KARACHI: Police on Saturday arrested a suspect allegedly involved in the murder of prominent social activist Perween Rahman, who headed an institution involved in regularisation of slum areas and provision of drinking water and other welfare activities.

Ms Rahman, director of the Orangi Pilot Project Research and Training Institute, was gunned down by armed pillion riders in an attack on her car in Orangi Town in March 2013.

The suspect, Raheem Swati, was apprehended in the Sultanabad area of Manghopir after hectic efforts which lasted three years and with the help of technology, said Karachi-West SSP Azfar Mahesar.

Speaking at a press conference at his office, the senior officer said Swati was the prime suspect in the case and termed his arrest a ‘breakthrough’ that would unearth the motive behind the killing.

Accompanied by SSP Investigations (West Zone) Akhtar Farooq, the Karachi-West SSP said the held suspect was an ‘active worker’ of a political party who was allegedly involved in several targeted attacks on ethnic and sectarian grounds. Besides, the hitman also had ‘links’ with the banned Tehreek-i-Taliban Pakistan, the officer added.

Two other suspects namely Ahmed Ali alias Papu and Imran Swati had already been arrested and sent to prison.

Speaking to Dawn, SSP Farooq cited three major reasons behind the assassination of the social activist.

Firstly, he said, Swati was allegedly involved in land grabbing activities in Orangi Town and adjoining areas though the police had traced only four of his properties so far. According to the SSP, Ms Rahman in her interview recorded a year before her murder had specifically mentioned Swati’s name over his alleged involvement in land grabbing.

She had also talked about political backing of the criminal elements, said the SSP investigations while sharing contents of the 40-minute interview.

Secondly, the officer said, Swati also allegedly ran an illegal water hydrant which had been opposed by Ms Rahman.

Thirdly, he said, the held suspect wanted to convert the place of the Orangi Pilot Project into a Judo Karate centre, which was being opposed by Ms Rahman.

“The held suspect was a local leader of the Awami National Party and had remained a councillor in the area on the platform of the party,” said the officer.

SSP Farooq also claimed that Swati’s in-laws were suspected militants linked with the Tehreek-i-Taliban Pakistan. “Mostly, Swati used to travel along with members of Tableeghi Jamaat,” he said.

He used mobile phones of other members of his group, and discarded subscriber identity modules (SIMs) after using them in order to avoid being traced. “We collected around 450 CDRs (call data record reports) for surveillance purpose and deployed informers as well for his arrest,” said the officer.

He was absconder in seven criminal cases including three murders, added SSP Farooq.

Also, his name was included in Red Book and his number was 76 in the Red Book, which contains names of 103 alleged criminals in Sindh.

He used to travel along with six to seven gunmen.

The Supreme Court of Pakistan had taken notice of the murder of the social activist on a constitutional petition filed by HRCP chairperson Zohra Yusuf which was still pending before the court.

On directions of the SC, the Sindh home department had set up a joint investigation team comprising representatives of police, Rangers and intelligence agencies.

“Led by Karachi-West DIG Feroze Shah, the JIT held 15 meetings so far and interrogated several suspects linked with land mafia, tanker mafia and extortion and arrived at the conclusion that Swati was a prime suspect in the murder,” according to the police statement.

Talking to Dawn, Mohammed Sirajudin, head of Technical Training and Resource Centre (TTRC) of the Orangi Pilot Project, confirmed that Raheem Swati had demanded a portion of the land to convert it into Judo Karate or bodybuilding centre but Perween Rahman had opposed it.

He said the demand had been made three to four years before the murder of the OPP director.

Mr Sirajuddin added Swati lived in a building just opposite the main gate of the OPP’s office.

The TTRC head said Ms Rahman used to say that if her studies about land mafia and water mafia were published or made public, she might get killed because it was revealed in them that political parties, Taliban, law enforcement agencies and others were behind these activities.